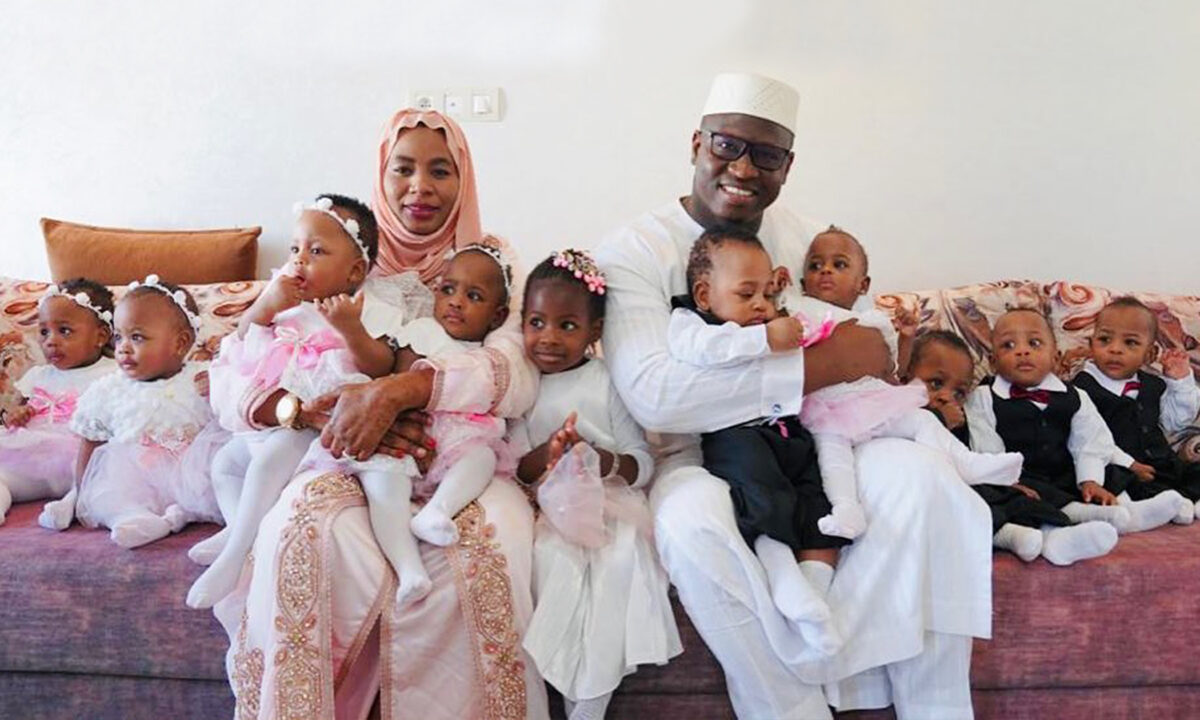 Halima Cissé and her husband, Abdelkader Arby, with their 10 children: nonuplets and 3-year-old daughter. (Courtesy of ﻿Nonuples Arby)
People

'I hope God blesses everyone who doesn't yet have children.'
BY Louise Chambers TIMEJune 1, 2022 PRINT

The record-breaking Malian nonuplets have just celebrated their first birthday “in perfect health.”

The babies born in Morocco last year are the world’s only known naturally conceived nonuplets, and even hold the Guinness World Record for most babies delivered in a single birth to survive. The previous record was held by eight babies born to “Octomom” Nadya Suleman of the United States in 2009.

Mother Halima Cissé was flown to Morocco from West Africa by the Malian government for special care at 25 weeks’ gestation, ahead of the planned Caesarean section on May 4, 2021, while Cissé’s husband, Abdelkader Arby, an officer in the Malian army, stayed back in Mali to look after their first child, a 3-year-old daughter.

Arby and Cissé welcomed five girls and four boys at Ain Borja Clinic in Casablanca, Morocco, at 30 weeks’ gestation. The babies ranged in weight from just 1 pound 1 ounce to 2 pounds 2 ounces at birth.

The eighth and ninth babies were a surprise, according to Dr. Youssef Alaoui, the medical director of Ain Borja. Alaoui told Today Parents that the ultrasounds had only indicated seven fetuses, but luckily, the surprise “didn’t faze” the medical team, since the clinic boasts “one of the largest neonatal resuscitation services in Morocco.”

“It’s a first for the whole world, and we’re proud to have had this extraordinary experience thanks to our medical and technical expertise,” he added.

The newborn babies were placed in incubators and were cared for at the Ain Borja clinic for several months after being born, and are still receiving supportive care from nurses.

Arby met their newborn babies for the first time in October 2021 before returning home to Mali to be with their 3-year-old daughter. However, around the time of the nonuplet’s first birthday, the proud dad and daughter returned to Morocco to be with their family.

They held a small birthday party in their Moroccan home—a medically equipped flat belonging to Ain Borja Clinic where the family is currently residing—inviting nurses and neighbors to join the celebration.

“Nothing is better than the first year,” Arby told BBC Afrique. “They’re all crawling now. Some are sitting up and can even walk if they hold on to something. It’s not easy but it’s great. Even if it’s tiring at times, when you look at all the babies in perfect health … we’re relieved.

“The Malian state has put everything in place for the care and treatment of the nine babies and their mother. It’s not at all easy, but it’s beautiful and something that is comforting.”

While the family of 12 hasn’t yet returned to Mali en masse, they already have a fanbase comprising eager extended family members, friends, and followers. Arby and Cissé share snapshots of their love-filled, unusual life with the world on Instagram.

Describing parenthood as “a real treasure,” Arby expressed hope that others could one day share in a similar joy.

“I hope God blesses everyone who doesn’t yet have children,” he told the BBC, “that they can have what we, the parents of nonuplets, currently have.”