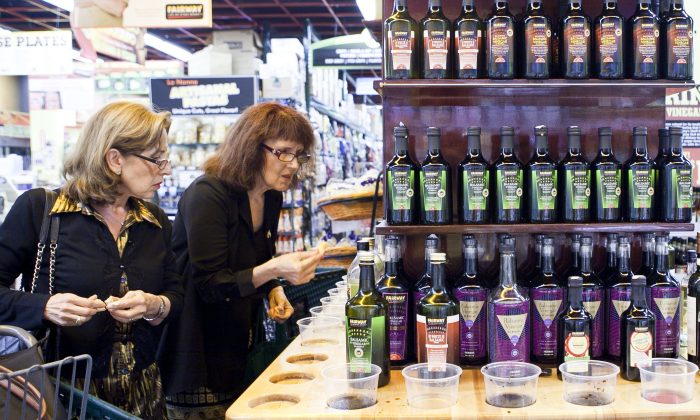 The world of olive oil is like the Wild West.

The “liquid gold,” in particular extra virgin olive oil, is a sought after commodity, with an increasing demand spurred on by research about its health benefits. It’s all the more disconcerting that no enforceable standards anywhere in the world govern the industry.

“At the moment, you really don’t know what you’re buying. There’s nothing standing behind what’s in the bottle,” said Curtis Cord about olive oils labeled as extra virgin. Cord is the publisher of the Olive Oil Times, an online website about all things olive oil. However, he predicts, “Times will be changing.”

In the United States, where California is aggressively trying to protect its producers, standards are currently voluntary.

The overall international association, the International Olive Oil Council (IOC), has set standards, but has no teeth, according to Steven Jenkins, Fairway Market’s master buyer. Neither, he said, is it willing to harm the industry by exposing any scandals.

In addition, “It is very expensive and time-consuming to test all the olive oil being exported. Closer to home, the European Union has chosen to sit on its hands for the same reasons,” he said.

More than 95 percent of the world’s olive oil production comes from the Mediterranean region. Extra virgin olive oil is highly susceptible to damage by air, light, and heat—and time. It’s more like juice than wine: freshness is key, especially to retain health-giving properties.

Occasionally there are reports of adulteration of extra virgin olive oil with lower grade olive oil or seed oils. The good news is, “Rarely these days do we find anything that’s adulterated,” said Eryn Balch, executive vice president of the North American Olive Oil Association (NAOOA), which adheres to IOC standards and conducts random independent testing in the United States.

For the last 25 years the NAOOA has been going to stores, just as consumers might, to buy bottles of olive oil and extra virgin olive oil (as opposed to having producers send them samples), and running chemical tests on about 150–200 samples a year to ascertain their quality and authenticity.

But the mislabeling of what is extra virgin remains an issue. It’s not always intentional, unlike an example given by Jenkins, where documents are fabricated to assert the validity of lab tests designating an oil as extra virgin when it isn’t. He calls it “the most egregious omission of the governance by the European Union.”

For consumers, it raises questions about what’s sitting on their supermarket shelves.

Jenkins has been an advocate for good-quality olive oil for almost 20 years. “I believe there isn’t a single bottle of un-oxidized (read ‘stale,’ ‘rancid,’ ‘not extra virgin’) on any shelf in any standard, non-specialty supermarket across the continent,” Jenkins wrote in an email. “This is much more than a quality-measured outrage. It is a health outrage.”

Last April at the New York International Olive Oil competition, half of the samples that came in from 700 producers around the world were found to have defects that would disqualify them from having the extra virgin label, said Cord, who presided over the competition.

“These are samples submitted by producers who are doing their best, and trying to make the best quality extra-virgin olive oil they can and really thinking they had the best in the world. You can imagine the how much of it is mislabeled at the supermarket level,” he said.

Cord added that the results were not very different from other international competitions throughout the world.

“It underscores a point that extra virgin olive oil means that it’s free from taste defects. To a trained taster, most of the extra virgin olive oil that we see available to consumers would not qualify for that label because it displays taste defects that indicate that it was not properly produced or it has been oxidized, or it has come into contact with contaminants during or after production, or was stored improperly at the retail destination.”

“There are many, many things that can go wrong—and they usually do,” he said.

Balch of the NAOOA said broad-based allegations from groups that have their own competitive stake in the market have become common. “Many of these claims are based only on ‘expert taste tests’ or even completely on hearsay. Official taste-panel certification should only be done by a full IOC-accredited panel of 8–12 tasters, not by individuals (like Consumer Reports used),” she wrote in an email.

Given the current lack of harmonization or enforcement of standards in the industry, there are a few different certification schemes out there, from a NAOOA Quality Seal program (which differs from the testing Balch mentioned above) to USDA Quality Monitoring Verification, all voluntary.

In the NAOOA voluntary certification, all brands, many of which with significant supermarket distribution, have continued to meet both sensory and chemical certification criteria, Balch said.

Still, she said, “Remember all olive oils will eventually go rancid and the process may be sped up by poor handling and storage (excessive heat, light, or air).

To further complicate matters, some specific olive varieties, for example arbequina, naturally degrade more quickly than other varieties. This is one reason why some manufacturers blend—for a specific flavor and also considering shelf life and handling expectations. It is also a reason why “rules of thumb” are difficult—while some varieties get old in 6–12 months, there are many that keep well easily for two years or longer.

“Proper handling and storage is critical to maintaining the quality and extending the shelf life—all extra virgin olive oil is susceptible to bad handling. This is why it’s important as a consumer to look at the packaging for signs of damage (or dust on the bottle indicating it has been on that shelf too long) and read labels for best by date or harvest date.”

But in regard to long-term effects, she said, “When olive oil oxidizes free radicals form. Free radicals have been associated with increased risk of certain disease specifically cancers and heart disease. Free radicals can damage cells and genetic material.”

Consumers are so used to the taste of rancid olive oil that they may not know what the real stuff should taste like. There is a range of flavors, from grassy to fruity, from mild to bold and even spicy, but generally, Cord advises that olive oil should taste green and have some pepperiness. That pepperiness signals the presence of healthful antioxidants. It doesn’t mean the olive oil should be green; color has nothing to do with it—the fresher the oil, the better.

People make the analogy between olive oil and coffee or chocolate, said Cord. These foods can range from mellow to bitter. “The difference with olive oil is that a lack of bitterness is actually unhealthy.”

Olives pulled off the tree are so bitter you can’t even eat them without treating them or soaking them in brine, he added.

When he teaches at a culinary school in Boston, he said he has students taste old, rancid oil as well as one that is bitter and peppery. Out of habit and familiarity, most tend to prefer the rancid oils, he said.

Consumers who prefer less peppery olive oils should consider the more mellow oils made from arbequina olives, for example.

Finally, for an oil to be certified as extra virgin does not mean it’s of high quality. It simply means it’s free of defects.

Olive oil is here to stay. As with so much else, becoming educated about olive oil is the best thing a consumer can do.

– Taste before you buy. Different olive oils have different flavor profiles, so find what you like. If you can get guidance in tasting, you’ll learn to tell if an olive oil has started to go rancid. Find a retailer who has done the research and cares about the provenance of the products. In New York City, try Fairway Market (tasting stations at various locations), Oliviers & Co. (various locations), Di Palo’s Fine Foods (200 Grand St., Little Italy), or O Live Brooklyn (60 Broadway, South Williamsburg).
– If you can’t taste an olive oil before you buy and find it rancid once at home, take it back to the store.
– Buy oil in dark glass bottles, which filter out the light.
– Look for a recent harvest date, ideally (olives are harvested once a year). If that’s not available, look for a bottling date. A good quality extra virgin olive oil that’s high in anti-oxidants will last longer than a poor quality oil, said Cord, possibly up to two years.
– For European olive oils, look for Protected Denomination of Origin or Protected Geographical Indication (IGP) seals.
– Look for quality seals, such as the North American Olive Oil Association (NAOOA) seal.
– Look for winners of olive oil competitions.
– Store bottles away from light and heat, away from the stove, windowsill, or top of the refrigerator).
– Once open, consume it quickly, within a couple of months. Buy smaller bottles if you don’t use much.