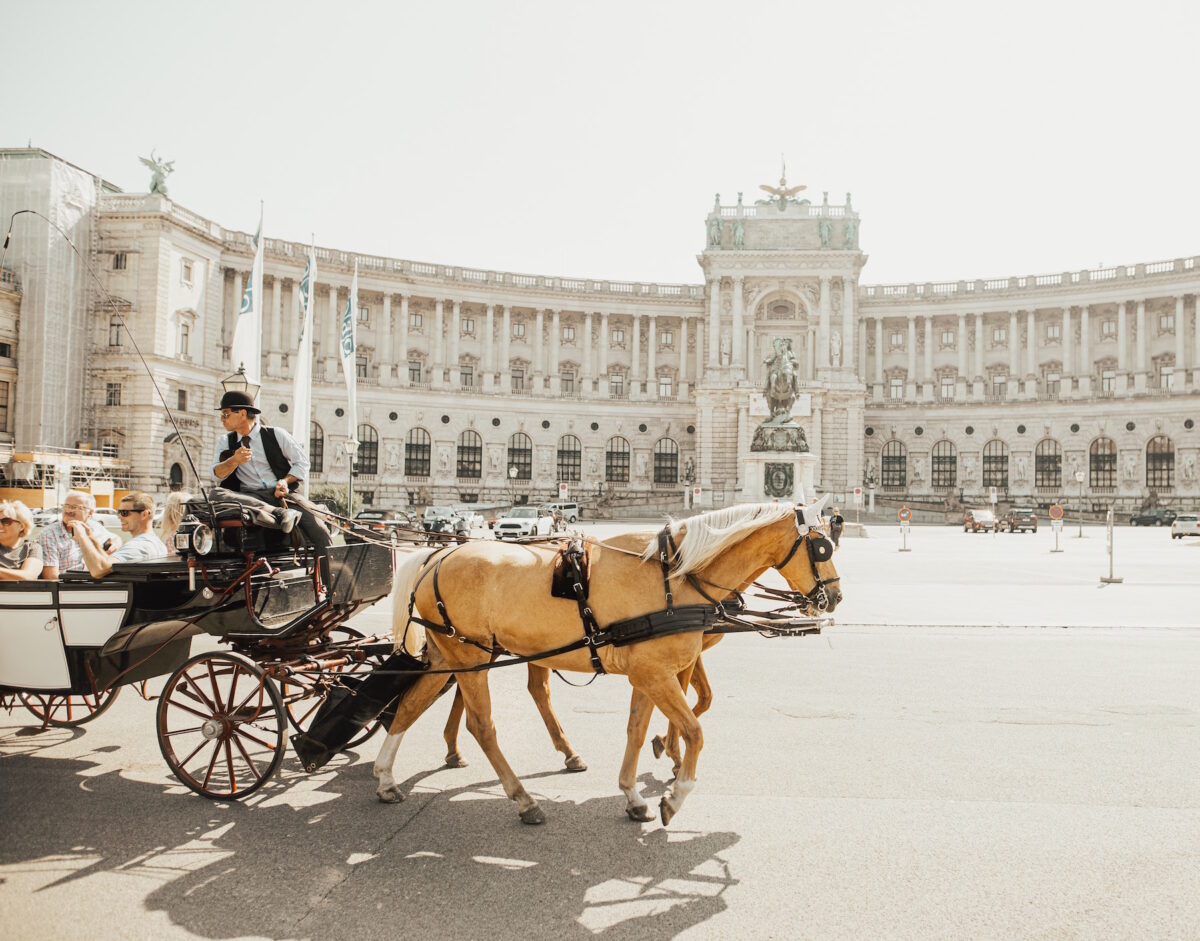 It was a warm spring night just before a long weekend, and as the sun faded, the city came alive. Along the Danube Canal, diners settled down to their first aperitif at patio restaurants lit by lamps, just lit for the evening. Bicyclists zoomed by on the boardwalk, and little clusters of young people sat cross-legged by the water, in no hurry to get anywhere till Monday. As I crossed through the dense web of this area called the Bermuda Triangle, it was clear that these rollicking bars had already been rocking for hours, frosty mugs of this city’s famous beer flowing freely, as the steady roar of conversation was punctuated by raucous bursts of laughter.

I didn’t stop off for a frosty pint. I was single-minded, driven by one purpose—to secure and consume a steaming plate of the world’s most famous wiener schnitzel. But arriving at Figlmuller on Backerstrasse, things didn’t look good. A line-up spilled out the door, and down the block. Trying their second and what I hoped would be more-secret location down a back lane, just a few paces away, I arrived to find a tuxedoed waiter repeatedly telling hungry, aspiring diners that without a reservation, there was simply no way he could seat them.

But it’s always worth asking. When the crowd cleared, I quietly inquired whether the man might be able to find a spot, for just a single person? A seat at the bar, if there was in fact a bar? Maybe a communal table of some sort? Perhaps a group of friends that had a no-show, and didn’t mind a stranger in their midst?

“Go across the lane and get a drink,” he said, directing me to a hole-in-the-wall bar with walls covered with menus on chalkboards. “Wait 10 minutes, or 15. I will let you know.” I found a small corner to lean, ordered a glass of the house white, and waited with anticipation.

I was in Vienna, once the beating heart of a powerful empire. Still the capital of Austria, this dynamic and modern city of about 2 million still retains many vestiges of its royal, Habsburg past. The grand Hofburg, the seat of government since 1279, where Emperor Franz Joseph I served simultaneously as the Emperor of Austria, the King of Hungary, and the President of the German Confederation, among other titles. Soaring St. Stephen’s Cathedral, principally built in the 14th century, and official church of the empire. Schonbrunn Palace, just outside of town, a summer residence for the royal family, with a total of 1,441 rooms. While I’ve visited these famous sites, I was in town to look a little further under the radar, at small, slightly quirky museums. And, if possible, to dine on a little schnitzel.

For starters, a deeper look at Esperanto. Housed in the Palais Mollard, a 17th-century baroque palace built by a count, the small museum dedicated to the preservation and celebration of the world’s most widely spoken artificial language was quiet when I visited. Part of Austria’s national library, a visit here will take you through the background: created by a Polish eye doctor named L.L. Zamenhof in 1887, he aimed to establish an international second language shared across the globe, publishing a textbook under the nom de plume “Doktoro Esperanto.”

The goal wasn’t just linguistic. Living in an often-fractured part of Eastern Europe (his hometown was part of the Russian Empire at the time), Zamenhof intended to construct a base layer for international harmony. It didn’t really work out—perhaps 100,000 people speak the language today, and I was the only visitor in the two-room museum (which is lovely, with vaulted ceilings and original touches). But it was still fascinating, walking through the history. The Habsburg Empire was vast and multi-lingual, and Vienna has hosted the international congress for Esperanto. Hitler was not a fan—he closed the museum and imprisoned its director.

Nearby, I made my way along a nondescript street lined with small furniture stores and clothing shops, to the former residence and office of Sigmund Freud. Inside, the study where he saw patients was absent his trademark couch. Some wall paneling and coat hooks are the only surviving elements from the original furniture. The pieces preserved here include Sigmund’s original doctor’s bag (stamped in black, “SF”), plus 20,000 letters of his personal correspondence. And a collection of antiquities, Greek, Roman, Egyptian, Etruscan, some 3,000 in total.

Hungry from a day of exploring, I made my way for some schnitzel—and I found it. Perhaps 20 minutes after my first sip of that Austrian white, the waiter came for me, beckoning across the narrow laneway. Seated at Figlmuller under a barrel roof and surrounded by just a handful of tables lined with hard-backed pews, I ordered the original, served here since 1905, pork chops pounded flat, breaded and sautéed, accompanied by a simple potato-seed salad in pumpkin oil. Simple, and huge, the schnitzel portion reached the corners of the plate—the hearty amount required by hungry workers more than a century ago. And enough to fuel my planning for another day of exploring this city.

Fly: Vienna International Airport (VIE) is a major European hub, home to Austrian Airlines, which connects the city with 130 destinations around the world.

Stay: A brand-new hotel set directly on the Danube Canal, Radisson Red in Vienna offers comfortable rooms and artistic touches in a design-forward hotel. Check in, drop your bags, and relax in their rooftop bar, which has a greenhouse feel and offers 360-degree views of the surrounding city and canal, always busy with tour boats.

Getting Around: While taxis and ride-sharing services are both available (and reasonably priced), Vienna has a public transit system you would expect from a major Western European city, including 29 tram lines, 127 bus routes, and a metro with five lines.