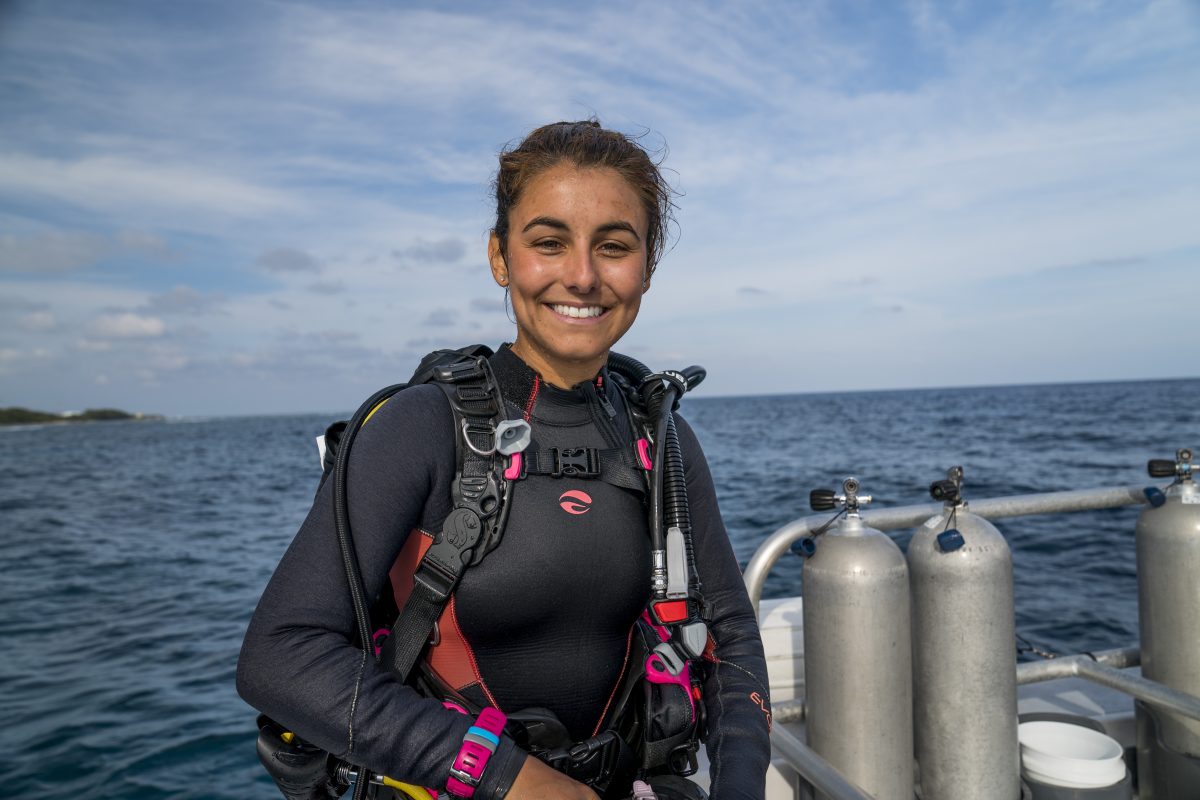 It can be difficult to comprehend, but the ocean accounts for approximately 71 percent of our planet’s surface area. The earth’s oceans are largely responsible for the weather, air quality, and provide an abundance of natural resources. Tragically, our oceans are becoming more and more polluted. However, one woman is on a mission to show the world how beautiful our waters are in an effort to protect them.

Meet 26-year-old French Canadian Sarah Gauthier, also known as Scuba Sarah. Gauthier first developed an interest in diving when she saw a flyer at the pool while she was attending the University of Montreal. Her mother was an advanced PADI certified diver, and she thought it might be fun to travel with her and be her diving buddy.

Gauthier’s first open water dive was in a quarry in Quebec, but outside of Canada she had the opportunity to have her second open water dive in Hawaii for a warmer experience.

“That’s really where it hit me. I got hooked right away with all the fish and everything,” Gauthier said.

Gauthier had been working in Grand Cayman as a PADI dive instructor, and she could see the degradation and pollution the ocean and sea life were enduring. She felt like she needed to do something.

One morning she woke up and knew she would have to do something grand to get people’s attention.

For the last several months, Gauthier been on a journey to dive all seven continents by herself to document the ocean’s beauty and raise awareness about marine conservation.

Instead of documenting and sharing the pollution on social media, she is striving to show the beautiful, positive nature of the oceans. She is traveling with one reusable water bottle, mug, straw, and set of cutlery to demonstrate that it’s possible to travel sustainably. She has also accepted no money for her trip.

Gauthier left on Aug. 20, 2018 and has traveled to every continent besides Antarctica so far.

As one might imagine, she has seen some amazing wild life and has had some memorable experiences. She started in Iceland mainly because of the frigid temperatures, and wanted to get check it off the list. She dove between the tectonic plates, touching both the North America and Europe. She also got to see an underwater chimney, with a microclimate featuring all kinds of sea life.

Her second dive was in the warmer waters of Greece, where she was able to dive in an underwater cave and saw stalactite, which is a tear drop rock formation underwater. There isn’t as much sea life in Greece, but Gauthier was able to explore several shipwrecks during her dives.

Her next dive was in Egypt, where she encountered a dugong and an oceanic white tip shark. Furthermore, she was able to see incredible coral formations in the Red Sea.

The Philippines was unique because of the abundance of marine life. She was able to see a thresher shark, a species of shark with the longest fin of its genus, which is nearly as long as its body. Furthermore, she encountered a mermaid purse, which is a bundle of shark eggs that are incubating on the ocean floor. She was also able to dive amongst a gigantic ball of sardines.

Indonesia was next, where Gauthier stayed on a live-aboard ship for 10 days. She had the opportunity to see an oceanic manta ray on one of her dives, which is the largest manta ray in the ocean. She also found her first pigmy seahorse that was about the size of two grains of rice.

The next stop was Australia, where she saw pregnant grey nurse sharks. There were about 50 of them, and they travel to Australia to rest. She also saw a school of eagle rays as well.  In California, Gauthier had the opportunity to dive with seals for the first time.

“I think I cried because it was the first time I saw one underwater, and they’re like puppies, they’re like babies, and they just stop in front of your camera and look at you. You see those big eyes, and I don’t know, I was really emotional,” Gauthier recalled.

Her next stop was Ecuador, where she had the chance to dive off of the Galapagos Islands. On one of her dives, she encountered a school of hammerhead sharks and saw her first mola mola.

She has now returned to Quebec before she completes the final leg of her journey in Antarctica in March. The day she returns to dry land, she will celebrate her 27th birthday. Despite the wild experiences she has had and the marine life she has encountered, it’s the therapeutic aspect that is Gauthier’s favorite part about diving.

“I would say it’s really the zen part. When you’re underwater all of your problems stay on the surface, and then it’s just you, your equipment, and the nature,” Gauthier said.