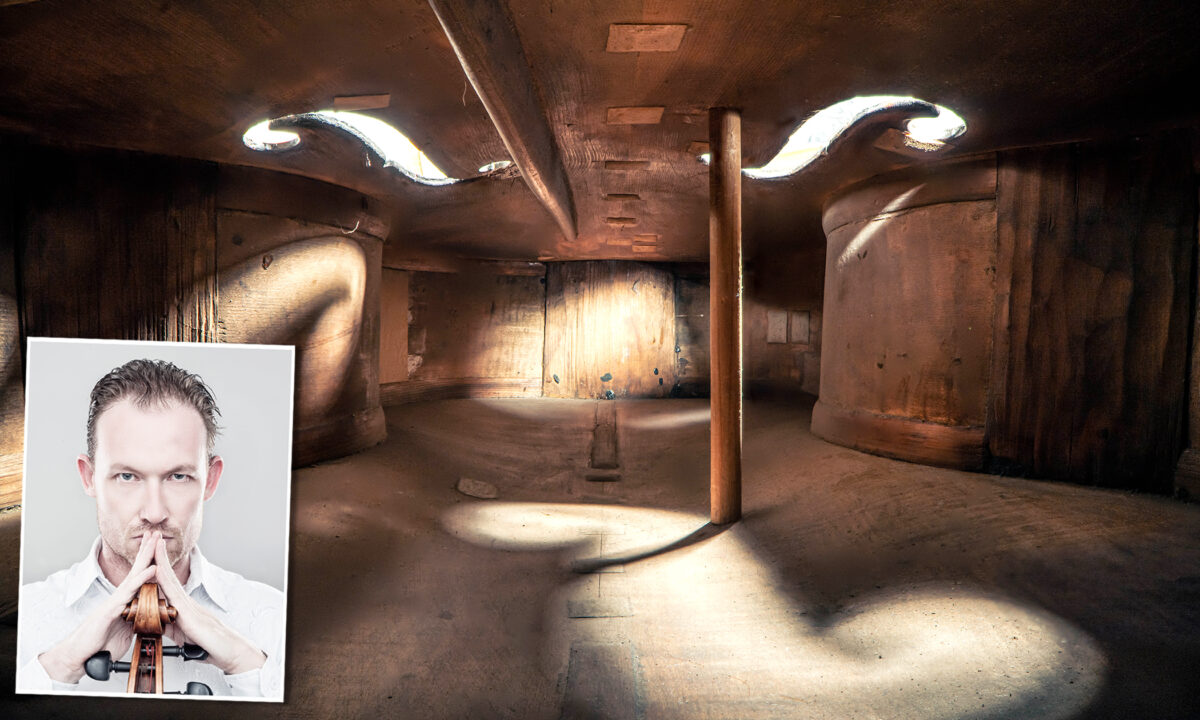 A former concert cellist returned to a long-time love of photography during the pandemic, using new camera lens technology to explore musical instruments like never before. His compelling photos of instruments’ interiors are at once close-up and labyrinthine, giving us a peek into a world of vast, secret spaces.

Charles Brooks, 43, has been a musician most of his life, performing as principal cellist with orchestras in Brazil, Chile, and China. A little burned out from the pressured lifestyle, he returned home to Auckland, New Zealand, in 2016 and took up photography full time.

“It was at that time that I returned to photographing my first love, the instruments themselves,” he told The Epoch Times.

Brooks was first drawn to the intriguing world of photography at the age of 15 and soon discovered that he loved the darkroom process even more than taking photos. “I found myself immediately turning my lens toward classical music as it was already such a defining force in my life,” he said. “Something about the way the chemicals revealed hidden details on a print fascinated me. This theme continues with my work today.

“I am always looking for hidden subjects and spaces, things that the camera can see but the eye cannot. This is what draws me to the spaces inside instruments.”

His fascination is exemplified in “Architecture in Music,” a photo series exploring depth and detail like never before. Among his subjects are a Fazioli grand piano, a rare, late-18th-century Lockey Hill cello, and a Burkart Elite 14k rose gold flute.

“We’re so familiar with the outside of these instruments that they can appear almost mundane,” Brooks explained. “But the inside reveals so much personality: the makers’ tool marks, repairs carried out through the centuries, and patina built up from decades of concerts in great halls and jazz lounges.

“I’d like people to recognize that, often, the instrument is just as important as the performer; in many cases, it’s the performer’s extraordinary privilege to handle these exquisite machines that have been passed through many generations of artists, each with their own hopes and dreams, successes and failures.

“I believe a little of each concert is preserved in every instrument, be it as small as a speck of dust,” he reflected.

It was when Brooks hired a foot-long, 24mm-wide Laowa probe lens for an unrelated commercial shoot in 2020 that he found its properties allowed him to explore tiny spaces; macro lenses of the past had always been limited by a narrow depth of field.

“When you see a photo with such a shallow focus, your brain immediately assumes it’s something small,” he explained. “I wondered what would happen if you could take a photo of a small space where everything was sharp, from front to back. Would it appear big? The answer to that was a resounding ‘yes.'”

Brooks’s discovery opened up a brand-new perspective, yet he still had to compensate for the small aperture by compiling “dozens to hundreds” of individual shots of the instruments’ interiors, each frame focused slightly further away than the last. When looking at the blended result, he said, the brain simply assumes it is looking at a “cavernous space.”

Armed with his Lumix S1R camera, plus a “very clever software” called Helicon Focus, and PhotoShop software, Brooks shoots for up to four hours and can edit for days to achieve his desired results. He says he works with skilled technicians and luthiers to find ways to access instruments’ interiors without causing damage and has modified his lens by stripping away some of the external casing.

“For future shots, I’m experimenting with smaller cameras and other exotic glass that can be assembled and remotely controlled from inside the instruments themselves,” he said.

One of his most exciting moments in the “Architecture in Music” series occurred by accident when a client with whom he was shooting a saxophone suggested they look at a didgeridoo in the corner. “I expected to see the rough marks of stone tools, but was instead presented with an extraordinary alien tunnel full of wavy organic lines,” Brooks recalled. “It turns out that didgeridoos are not hollowed out by hand, but rather by termites!”

During Brooks’s 20-year hiatus from photography to focus on his music, the camera was never far from his side; from the borders of China and Kyrgystan to the forests of Patagonia, to the theaters and opera houses of Sao Paulo, there was always something beautiful to document.

When snapping the outdoors became more dangerous, Brooks turned his camera toward his fellow musicians in the Sao Paulo Symphony Orchestra. His fascination for finding hidden angles and spaces informs his portraiture, macrophotography, and a further passion—astrophotography—alike.

Brooks, who is active on social media, shares his work on his website. He has been “humbled” by the positive response to his latest photo series, from both followers and the media in myriad locations.

“To the photographers out there, I’d say photograph what you love,” he advised others. “If you’re passionate enough about it, you’ll find your own unique view of the subject, and that can bring joy and fascination to everyone.”

Check out more of his fascinating work below: