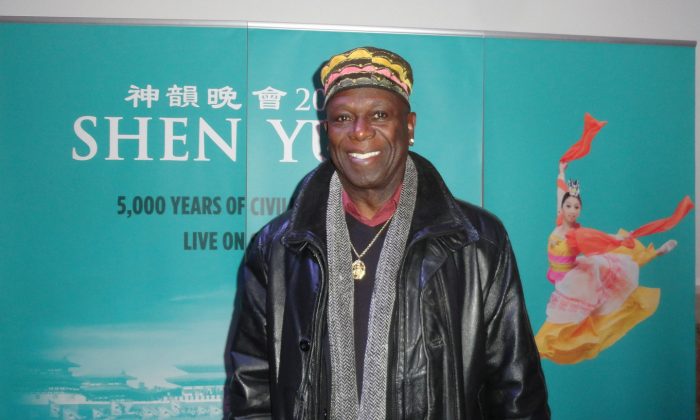 TORONTO—Henry Gomez, aka King Cosmos, is one of Canada’s most prominent performers of Carribbean music, an award winning musician who has toured both nationally and internationally, working to keep the calypso culture vibrant. Mr. Gomez has also worked as a radio host, emcee, actor, and as chair of the Caribana festival.

Seeing Shen Yun in Toronto on Sunday afternoon, he was blown away by the performance.

“Excellent, fantastic! I enjoyed it, truly enjoyed it. Just amazing—the dancing, the singing, the music, everything. All the elements worked beautifully,” he said.

Mr. Gomez was particularly impressed by Shen Yun’s animated backdrop and the way it was integrated with the performance.

“The way the whole thing was integrated, especially when the heavenly beings come to earth, the way they brought them in and it just flowed quite naturally into the earthly appearance—I found it really magical,” he said.

“Everything was inspiring: the dancing, the discipline that it must have taken to get the dancers to do the things they do,” he said.

“All the elements of theatre were excellently done—the dancing, the singing, the orchestration and the special effects, the staging—everything. I just loved it.”

He also appreciated seeing the spirituality depicted in Shen Yun, particularly the theme of the battle between good and evil.

“In every case, the good won over the evil,” he said.

“So you have that philosophical, ‘What is life,’ … When the heavenly beings intervene, they intervene on the side of good. All those elements make for good theatre, excellent theatre.

As a musician, Mr. Gomez also had a fine appreciation for the soloists. He was particularly impressed by erhu virtuoso Mei Xuan.

The performances by vocalists—soprano Yu Ming who gave a stirring rendition of “Your Long-Awaited Song” and tenor Tian Ge who performed “Fulfilling My Dream,” songs that talked about finding the meaning of life—also touched Mr. Gomez.

He was particularly impressed by Tian Ge’s ability to hold the note at the end of his song.

“He just held it out so beautifully,” Mr. Gomez said.

New York-based Shen Yun Performing Arts has four touring companies that perform around the world. Shen Yun’s International Company wrapped up its Canadian tour in Toronto on Jan. 25. As part of its extensive tour of the U.S., Shen Yun will perform in Detroit from Feb. 5-8. For more information, visit ShenYunPerformingArts.org.