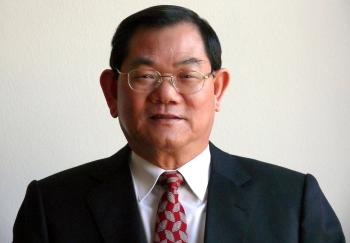 Mr Charles Liu, a representative of Taiwan, sent a greeting to the Shen Yun shows in Aarhus. (The Epoch Times)
Arts & Culture

AARHUS, Denmark—"Art as an expression of identity that gives a precious and better understanding of cultures and civilizations," said Hans-Gert Pöttering, member of the European Parliament.

As Shen Yun Performing Arts presents two shows in the concert hall of the city of Aarhus, Denmark, several politicians, as well as a representative of Taiwan, have sent their greetings to the New York-based company. One of them is Mr. Per Clausen, a member of the Danish Parliament. He writes that he is very happy that the Chinese embassy didn't succeed in stopping Shen Yun from performing in Denmark.

"It is of the utmost importance that we Danes are not only exposed to the brand of Chinese culture that is under the control of the state-party apparatus. Hence, I congratulate you for finding a venue for your show in Denmark."

The show features about one hundred people, mostly Chinese, displaying their true culture. They are dancers, musicians and soloists.

Charles Liu, a representative of Taiwan through the Taipei Representative Office in Denmark, writes that he is very encouraged that Shen Yun is dedicated to the preservation and promotion of the Chinese cultural heritage and its characteristics, through music, dancing, and singing and without any political motivation.

"The members of the group perform not only as artists on the stage but also as cultural ambassadors in the global village. Through viewing this performance, the audience will surely gain spiritual insight and develop a better understanding of Chinese culture," he said.

Shen Yun opens a window into traditional Chinese culture with its 5,000-year-old history. It is a culture rooted in Confucianism, Buddhism, and Daoism, whose value systems are the opposite of those of the Chinese Communist Party.

Marc Perera Christensen is running for mayor in Aarhus. He thinks it is a grand and important thing to be able to experience the true China and is happy that Shen Yun is performing at the Aarhus Musikhuset.

"I hope that the show will contribute to the understanding of this grand culture that the communist party has oppressed in such an appalling way."