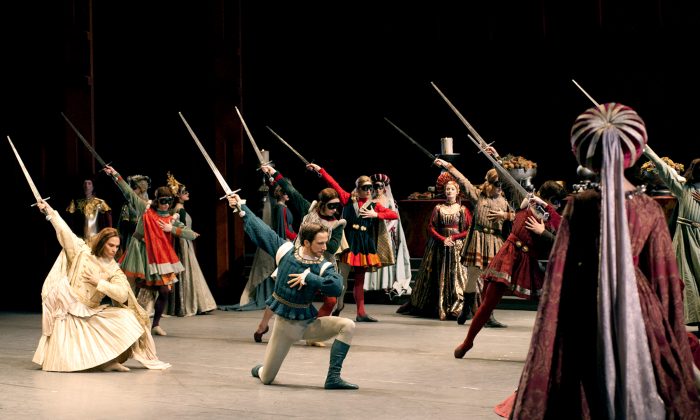 TORONTO—The National Ballet of Canada’s first soloist Etienne Lavigne has been playing Tybalt for 14 years in Romeo and Juliet, and although he still enjoys the role, he sometimes wonders if he’s been typecast as the bad guy. Throughout his career, he has played the role of several other villains as well as Tybalt.

On the other hand, Lavigne doesn’t necessarily see Tybalt as a bad guy. “I like to think that he’s a flawed person, but he’s not just mean and evil.

“I love that he is ‘The Prince of Cats’ and that he is a great swordsman,” he said.

Lavigne is dancing the role of Tybalt this Sunday as part of the National Ballet of Canada’s staging of Romeo and Juliet at Toronto’s Four Seasons Centre for the Performing Arts, June 20-22, and again at Los Angeles’ The Music Center, July 10-13.

In the ballet, as in Shakespeare’s play, Tybalt is Juliet’s cousin who confronts Romeo after the latter arrives uninvited to the Capulet family’s ball and dances with Juliet. The next day, Tybalt challenges Romeo to a duel, which he refuses. Through a series of unfortunate events, Tybalt kills Romeo’s friend Mercutio, and Romeo in turn kills Tybalt in a fit of rage, leading to his banishment and the eventual tragedy of Romeo and Juliet.

Lavigne has performed Tybalt both in John Cranko’s classic version and in Alexei Ratmansky’s 2011 version, commissioned by the National Ballet as part of its 60th anniversary celebration. He noted that the two versions are very different.

“Cranko was way more character-driven, and Alexei has Tybalt dancing quite a lot more, so it’s more challenging for me, but it’s way more interesting,” he said.

Either way, Lavigne says Tybalt is a great role to dance.

“It’s got great depth and it’s very dramatic and very exciting. And you can be the tough guy on stage and scare everybody, so it’s a lot of fun.”

Yet despite Tybalt’s tough-guy persona, Lavigne believes that the character is actually a good guy whose main consideration is to defend his family.

“His world is really his family, and his kin, so for him somebody that desecrates the honour of his family is everything,” he said.

Since Romeo and Juliet is a love story, Tybalt becomes cast as the bad guy who interferes with the young lovers, yet it all depends from what perspective one looks at it.

“If it were Tybalt’s story, then Tybalt would be the good guy—he would just be trying to uphold the honour of the family,” said Lavigne.

“He’s just impetuous, and he’s aggressive, and he doesn’t think too much and just goes and does it, but he’s still trying to do the right thing. To me it’s good because it’s a lot tougher to think of someone who is just doing something nasty for no reason, just to be evil. But for me, Tybalt isn’t that.”

Although Tybalt’s intention is to fight Romeo, most of his fighting scenes are actually with Romeo’s friend Mercutio, who enjoys provoking him.

Lavigne explains how in the ballet the two men’s characters are reflected in the fighting style.

“He’s inventive, and I’m just technical; he’s imaginative and really I have no imagination. I just try to kill and do what I’ve been taught. So it’s very interesting.”

This time around the role offered a fresh challenge, yet one that quickly proved rewarding.

“I’ve been doing Tybalt for a long time, but my Mercutio is Skyler [Campbell] who’s brand new at it,” said Lavigne.

“It was interesting because he had no experience in stage sword fighting so we had to go back to basics. But he’s a very quick learner and he’s a very eager learner as well, so now he’s starting to be very proficient at it. And because he’s new, he actually brings in the imagination and a difference into sword fighting, into the actual fights together that I was discussing. As an artist, you can tell he’s got a lot to say, and I think Mercutio is a very good character for him for that.”

The National Ballet of Canada is staging Romeo and Juliet from June 20-22 in Toronto and from July 10-13 in Los Angeles. For more information, visit: www.national.ballet.ca