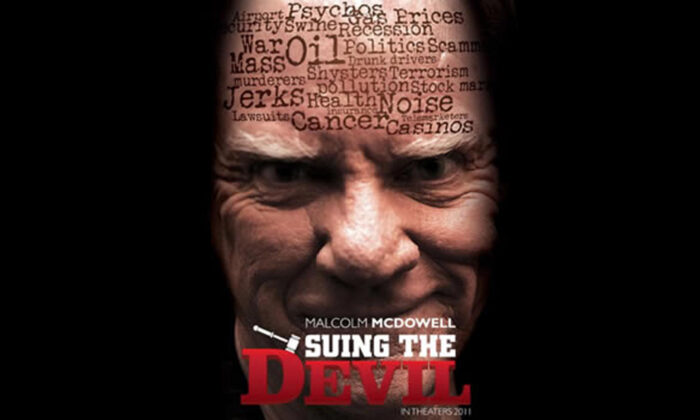 “The world is a lost place.” So says has-been salesman—turned aspiring attorney, Luke O’Brien (played by Bart Bronson). He’s waxing melancholic about the state of affairs surrounding the modern world of 2011 (if he thought that was bad, glad he didn’t see 2020 or 2021!). Everywhere he turns, things seem to be going down the toilet, and the fact that a drunk driver killed his mother and got let off scot-free is a centerpiece of his anger.

As things begin to crumble around him, Luke vocalizes his rage in front of his wife, Gwen (Shannen Fields). She feels bad for him but he falls further and further until he’s unreachable and inconsolable.

One day, Luke decides that he’s had enough—one rainy day he waits outside of the home of the man who drunkenly killed his mother. While waiting in his car with a gun, the glove compartment suddenly pops open and his Holy Bible appears. He has a revelation on the spot and realizes how far he has fallen.

With his limited legal knowledge, Luke decides that he’s going to sue the pants off Satan himself, to the tune of eight trillion dollars. Not only for himself but for all of the death and destruction that Satan has wrought on planet Earth throughout time.

Of course, when he shows up in court to announce his intent to sue the devil, the judge on hand, Judge Woods (Roslyn Gentle), thinks he’s gone bonkers. But on the last day before Luke files a default judgment, a man calling himself Satan (Malcolm McDowell) pops up out of nowhere. People doubt whether he’s the actual Prince of Darkness, but Satan’s pride gets the best of him and he pulls several hijinks that convince folks he’s the real deal.

Satan hires a top-flight law firm to represent himself and gets ten of the best lawyers in the world to represent him. Each of these attorneys has had their hand in supporting some sort of murky, ethically-challenged legal work, such as representing Big Tobacco or the casino industry.

Once the jury is selected, the “trial of the century” gets underway. It attracts tons of media coverage, which appeals to Satan’s sense of avarice and pride. The courtroom drama seesaws back and forth as both sides fling barbs at each other. But when Luke gets cross-examined by some of the more gifted attorneys on Satan’s side, he truthfully admits to many of the sinful thoughts and actions he’s engaged in. One of the lawyers points out that even though Luke became a Christian seven years past, he’s still done some pretty crappy stuff.

In a beautiful scene, Luke takes a break in between court sessions to do some serious soul searching. He acknowledges his failures at being a good Christian and begs for God’s forgiveness. He also humbly asks for a second chance to right his wrongs. But will he be able to defeat the powerful forces arrayed against him?

This is an amazing faith-based film that is an expose on the frailty of human nature, as Luke struggles with his issues and the challenging circumstances he finds himself in. It touches on the time-worn questions of faith, Jesus Christ, God, Satan, temptation, free will, salvation, Heaven and Hell, and so on. It doesn’t dwell on these topics for too long but rather features a bit of each one to pique the curiosity (or remind Christians) of what they represent in Biblical terms.

McDowell is at the top of his game in this film, belittling and mocking those around him, including the mass media. Bronson is also convincing as a man of faith who has somewhat lost his way but begins to get a second wind—faith-wise. “Suing the Devil” is an uplifting film that is extremely timely. It’s also safe for family viewing (ages 12 +).