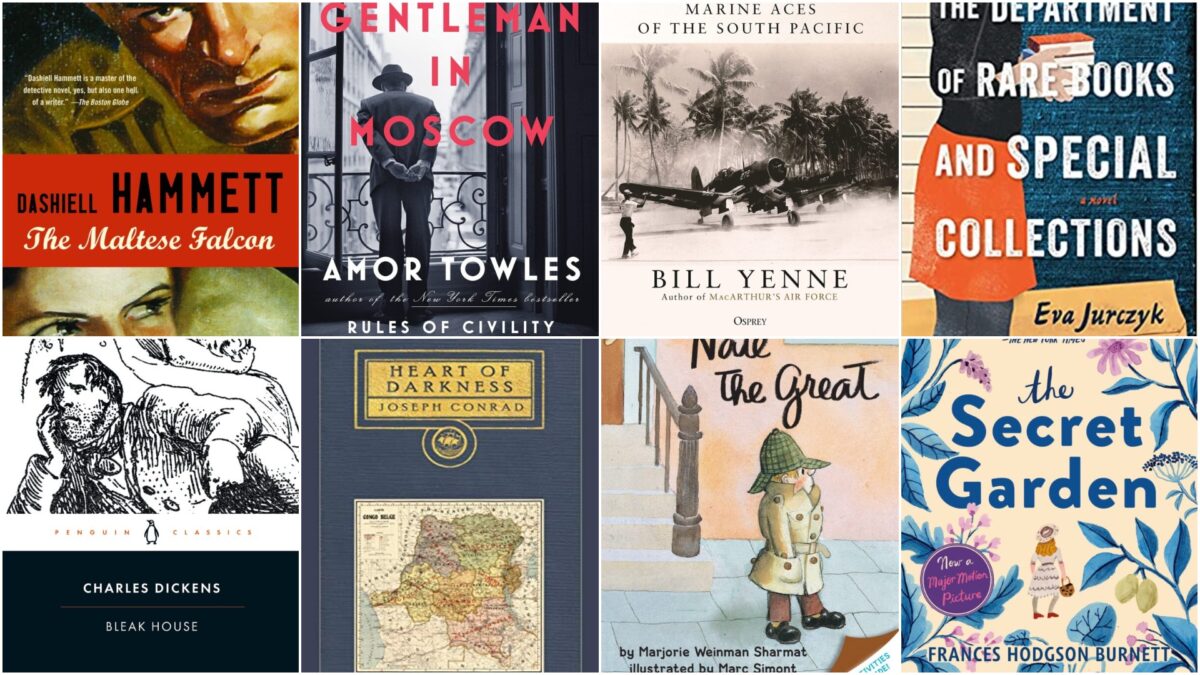 Epoch Booklist: Recommended Reading for the Week of April 3

This week’s selection of books includes mysteries: from crime noir to the earliest detective story to a children’s book that kids will love.

Crime Noir at Its Best

‘The Maltese Falcon’
By Dashiell Hammett

Style and Insight Make This Novel

‘A Gentleman in Moscow: A Novel’
By Amor Towles

It’s 1922, and a Bolshevik tribunal has sentenced Count Alexander Rostov to spend the rest of his life in the Hotel Metropol, under penalty of death should he ever leave the premises. Inadvertently protected by his sentence from the murders and imprisonments following the wake of the Revolution, the aristocrat creates a good life for himself, forging friendships and finding a new purpose. This story celebrates human ingenuity, love, and connection with others in the face of brutal authoritarianism.

Fighter Battles in the Pacific

This book tells the story of the two dozen U.S. Marine Corps aviators who achieved double-digit ace status: 10 or more kills. All spent time in the South Pacific Theater in World War II, fighting in or from the Solomon Islands between October 1942 and May 1944. Men such as Greg “Pappy” Boyington, Joseph Foss, and Marion Carl became national heroes during the war. Bill Yenne captures an era when the United States created heroes who fought against difficult odds and ultimately triumphed.

Colonel Mustard in the Library

‘The Department of Rare Books and Special Collections’
By Eva Jurczyk

Liesl Weiss has worked behind the scenes at a university library for decades in the rare books and special collections department. When her boss has a stroke at the same time a manuscript goes missing, she’s left to run things while reluctantly putting on her detective shoes. As she digs through archives and dissects her colleagues’ pasts, she discovers more than she wants to know about power and obsession among bibliophiles.

London had only recently introduced its detective force, and Charles Dickens was intrigued. He pulled from his experience dealing with London detectives and walking the London streets late at night to create “Bleak House,” considered to be the first detective novel—or at least the novel that introduced the idea of detective novels.

‘Heart of Darkness’
By Joseph Conrad

Narrator Charles Marlow tells about his time in Africa to five friends in a yacht floating down the River Thames. He describes journeying up the Congo River, which was “like traveling back to the earliest beginnings of the world,” in search of the mysterious Kurtz, a brilliant European ivory trader who has set himself up as a ruthless demigod among the natives that he commands. This novella invites discussions about imperialism, racism, power, and the meaning of civilization. A great choice for book clubs and the classroom.

Detective Stories for the Younger Crew

‘Nate the Great’
By Marjorie Sharmat

This first volume in the “Nate the Great” series features the boy detective tracking down a missing picture for his friend Annie. Kids love following Nate on these investigations as he uses logic to solve mysteries. For ages 6 to 9.

The Power of Nature

“The Secret Garden” is the perfect spring story, as its main themes include the power and beauty of nature and rebirth, not to mention gardens. Originally published in 1911, it’s a superbly told story that’s ideal for the whole family.