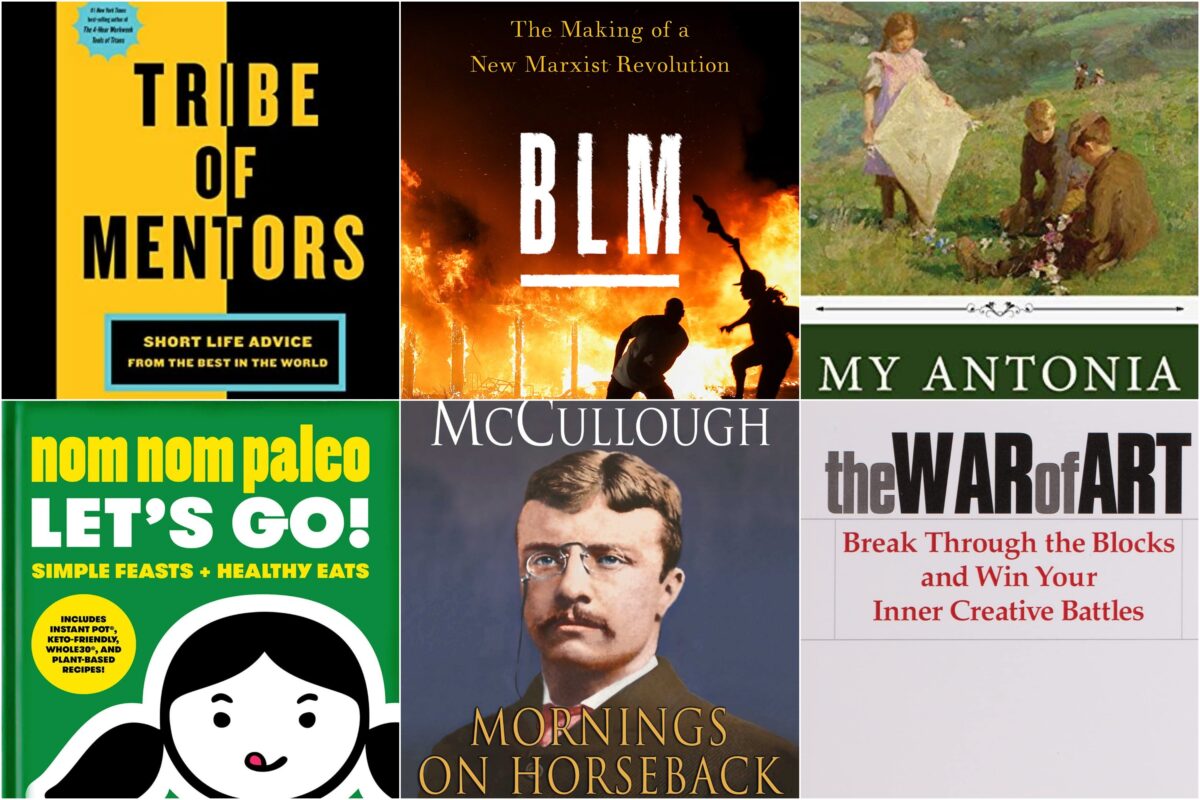 “BLM: The Making of a New Marxist Revolution”
By Mike Gonzalez

Gonzalez’s exploration of Black Lives Matter shows a Marxist movement that seeks to take over institutions using race politics. This important book will help readers debunk for those around them the political narratives at work.

Portrait of the Young Theodore Roosevelt

“Mornings on Horseback”
By David McCullough

The author of such renowned biographies as “John Adams” and “Truman,” McCullough tells the story of Teddy Roosevelt’s family and his youth: his frailty as a child, the imprint left on him by his father and mother, his time at Harvard and in politics, the death of his mother and his young wife on the same day, and his life as a cowboy in the Dakotas. A fine introduction to the man who became one of our most energetic presidents and who was a Rough Rider not only during the Spanish-American War, but throughout his life.

“Tribe of Mentors”
By Tim Ferriss

Ferriss reached out to those he deemed to be the “best of the best” in many fields, posing the same 11 questions—a collection he’s honed over the years, thanks to his popular podcast.

Investors, sports stars, authors, comedians, scientists, musicians, entrepreneurs, journalists, and more give their takes, offering something for everyone.

Easily digestible in bite-sized portions, it’s perfect for college students, self-help junkies, entrepreneurs, and dreamers who are striving for something more.

“The War of Art”
By Steven Pressfield

Pressfield wrote, “Most of us have two lives. The life we live, and the unlived life within us. Between the two stands Resistance.”

He defines resistance as “an energy field radiating from a work-in-potential. It’s a repelling force. … Its aim is to shove us away, distract us, prevent us from doing our work.”

He encourages readers to break through the resistance, offering practical advice on recognizing it and working past it.

This cookbook checks all the boxes of weeknight cooking: fast and easy, healthy but flavorful, family-friendly (recipes are teenage son approved), and internationally inspired. All the recipes are free of grains, gluten, dairy, and refined sugar. Fun cartoons and step-by-step photos, presented comic book-style, make it a joy to use.

Life on the Prairie

“My Ántonia”
By Willa Cather

An orphan, Jim Burden goes to live with his grandparents in Nebraska, where he befriends Ántonia Shimerda, whose family has immigrated from Bohemia. Although the two share an attraction to each other, they eventually go their separate ways. Jim becomes a successful attorney, and after some struggles, Ántonia finds her place as a wife and a mother to many children. This novel depicts the hardships of life on the plains, the love of land and family, and the value of an enduring friendship. An American masterpiece.

The Strength of Family in Hard Times

“Roll of Thunder, Hear My Cry”
By Mildred Taylor

Living in 1930s Mississippi, the Logan family fights Jim Crow laws and hard times. Central to the story is Cassie, a girl who practices dignity and respect in the face of adversity. Winner of the Newbury Award—and deservedly so.

All Creatures Great and Small

Blending the entertainment of a traditional storybook with a concise overview of creatures in our world, it features rich illustrations that lend themselves to discussing and providing a sense of true appreciation for nature.