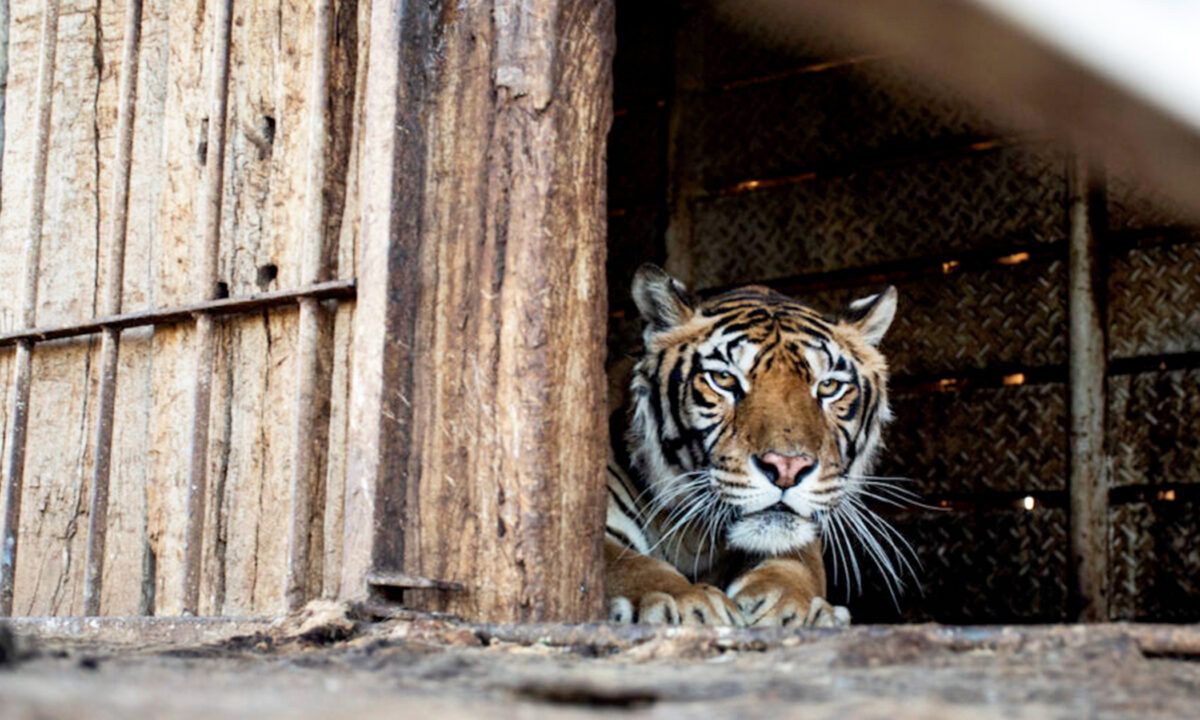 Now these tigers can see the sky above them, not just metal bars and a roof
BY Louise Chambers TIMEMay 9, 2022 PRINT

After being locked in an abandoned train carriage in Argentina for 15 years, a family of four rescued Bengal tigers has finally seen the sky above and felt the grass beneath their paws.

And then began the incredible mission to transfer the caged tigers to their new home over 20,000 kilometers (approx. 12,430 miles) away in South Africa.

In 2007, the now 18-year-old male and the 15-year-old female tigers were dumped by a traveling circus who asked a local farmer to care for the pair temporarily, stated Four Paws in a news release. The circus never came back, and since private ownership of wild animals is illegal in Argentina, the farmer “did not inform the authorities immediately.”

The unsterilized tiger pair had a “series of cubs” in captivity. Two were present at the time of the rescue.

During an inspection visit last year, the Argentinian wildlife authority, Fauna San Luis, had come across the inferior living conditions of the tigers, but as they were “unable to rehome the tigers locally,” their team began looking for options; this is when Four Paws learned about the situation and agreed to help.

“The train carriage was filthy with excrement and leftover meat and bones for a long time, but fortunately this is not the case anymore,” said Dr. Amir Khalil, a veterinarian with Four Paws and the rescue mission leader.

“Tigers need to move, run, play, and bathe. Being locked in a 75 square meters train carriage and only pacing back and forth for 15 years is not a tiger-worthy life.”

Years in confinement had hugely affected the big cats’ mental and physical wellbeing, said Khalil. His team made urgent plans to transfer the tigers to their Lionsrock Big Cat Sanctuary near Bethlehem, South Africa, with the support of the Ministry of Environment and Sustainable Development.

A Four Paws team spent months preparing for the move by observing the tigers’ behavior and needs and familiarizing them with their transport crates. Then, finally, came that much-awaited day of rescue.

On March 9 this year, tigers Sandro, Mafalda, Gustavo, and Messi—all named after famous Argentinian personalities—were made to voluntarily enter the transport crates using “positive reinforcement” in place of anesthesia, successfully earning the big cats’ cooperation before the crates were loaded on a truck and driven to the airport by their expert team.

It marked the very first Four Paws rescue mission in South America, according to the news release.

“Our team needed to be around them so they would stay calm in our presence and during the transfer,” said Khalil. “It was, and still is, a stressful situation for the animals, but we made them as comfortable as possible. For us, the well-being of the animals always comes first. We put soft floors, air holes, and water containers in the transport crates and will check on them during the flight layover.”

Upon arrival at Lionsrock on March 12, after a 70-hour journey, the four big cats were released into a grassy, “species-appropriate” enclosure for the first time in their lives.

“These tigers have never felt grass or earth under their paws,” said Khalil. “It’s the first time they can see the sky above them, not just metal bars and a roof. Now they have hundreds of square meters full of new feelings, tastes, and smells.

“They were already curious, exploring their temporary adaption enclosures and making careful first steps on the so-far unfamiliar ground. I am proud that we have brought all four tigers safely to South Africa,” he said.

Sandro—the oldest male and almost entirely blind—Messi, and Gustavo exited their transport crates and began exploring quickly, Four Paws said. Mafalda, the female, hung back and was the last to leave her crate.

Over weeks, the four tigers were gradually introduced in pairs, through an “adaption phase,” to a hectare-sized enclosure with plenty of enrichment activities to call home.

Lionsrock sanctuary manager Hildegard Pirker, whose staff will “closely monitor” the tiger family’s well-being and medical needs as time passes, said that the road to rehabilitation for these animals has now begun.

Four Paws shared moving footage of the tigers’ epic rescue, and first steps into their new home, on YouTube.

Lionsrock, one of Four Paws’s 11 wild animal sanctuaries, provides a lifelong sanctuary to over 100 previously neglected or abused animals that cannot return to the wild. Most are big cats rescued from the hunting industry and illegal pet trade, circuses, and zoos.

Four Paws CEO Josef Pfabigan said in a statement that the rescue of tigers such as Sandro, Mafalda, Gustavo, and Messi reveals “systemic problems and legal shortcomings” in protection for tigers, thus it’s helped to raise awareness of why this protection matters.

“By rescuing these four tigers in Argentina, we provide a better life for them individually, and create awareness for all animals globally to be treated with respect, empathy, and understanding,” he said.