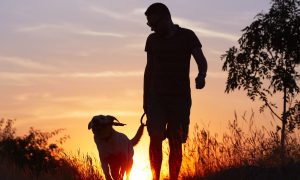 Truck Driver Covers 2,800 Cross-Country Miles to Save Pit Bull From Being Euthanized
0 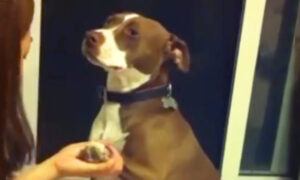 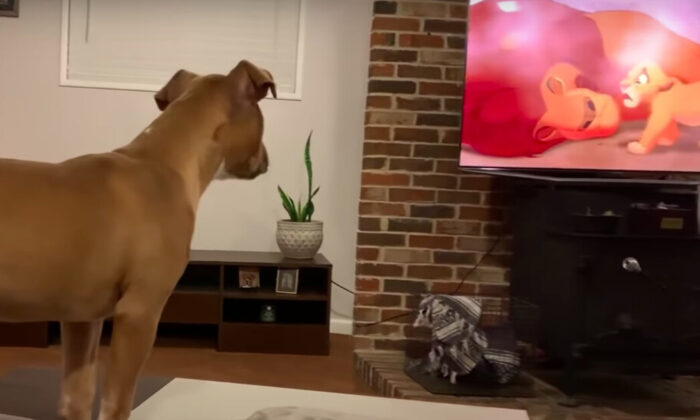 Most of us would have caught our dogs staring into the widescreen of the television at least once. While it might seem that they have no real interest in what they are watching, one could be wrong. This pooch from Tennessee will give some insight into what a dog feels when it’s tuned in to a movie, to be precise, an emotional scene.

When Josh Myers and his partner, Hannah, were watching “The Lion King” in February 2019, their adopted pit bull puppy, named Luna, was beside them busy playing with her toys. As the movie progresses to the scene where Simba’s dad, Mufasa, is thrown off a cliff to his death and little Simba finds Mufasa’s inert body, it gets emotional for most of us.

However, the tragedy of the scene unfolding wasn’t lost on little Luna; she was alertly watching and listening, and was obviously feeling the same emotions adults have at those poignant moments.

When Mufasa falls to his death, Luna immediately stops playing and turns her attention to the television to watch attentively. “To see her crying at the TV was the sweetest thing I think I’ve ever seen,” Myers wrote on a Facebook post alluding to the moment.

He added: “She even lays down right after Simba lays with his dad….We don’t deserve dogs. 4 months old and she’s already showing empathy.”

Unsurprisingly, the touching video, when posted on The Epoch Times Facebook page, went viral amassing 259, 000 reactions. Social media users were quick to express their reactions to the puppy’s emotional state and left comments.

“What an amazing dog!! The empathy in his feeling, he definitely will make him a great companion to the family,” wrote one social media user.

Meanwhile, another wrote, “What a beautiful dog you have and very very smart. Looks like a pit mix? I love them such kind wonderful dogs.”

A third one chimed in, writing, “That’s amazing How this adorable pup understands What’s going on in the movie This is unbelievable.”

According to The Dodo, Luna was born to a heavily homeless pit bull named Melon, who was taken to a foster home. Melon then gave birth to a litter of 12 puppies. With the help of Humane Educational Society, a shelter in Tennessee, one by one, each of the puppies started to find their forever home.

Luna was adopted by Josh and Hannah, a young couple in Chattanooga. During their first ride back home, Luna instantly connected with the couple and snuggled up in Hannah’s arms as Josh drove.

Since then, Luna has only grown and become an important part of the Myers family. On June 22, the pit bull even donned a flower girl dress for Josh and Hannah’s wedding, according to an Instagram post.

Posted by The Epoch Times on Sunday, September 8, 2019