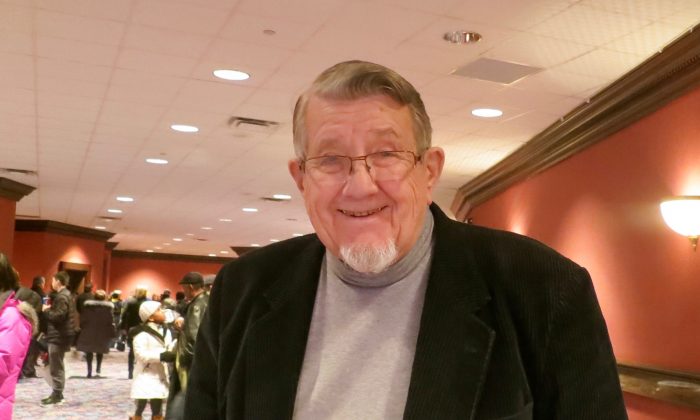 ROSEMONT, Ill.—”I prayed at one point, during the show,” said Edwin Frank. “I just thought I should thank God for being able to be here and enjoy that, and feel what they were trying to tell me,” he said on Feb. 13 at the Rosemont Theatre.

It was hard for Mr. Frank, a retired businessman and teacher, to explain why Shen Yun Performing Arts elicited this reaction. He mentioned the beauty of what he saw, but then said that he hadn’t “realized the depth of the emotions” that would go into the performance.

This characteristic of classical Chinese dance is called bearing. “Bearing … is the spirit of the dance movement. … When we dance, bearing is just as visible as any surface physical movement,” said principal dancer Jaling Chen in an interview on the company’s website.

“I thought of course, it was very moving,” said Marcia, retired from human resources, who accompanied Mr. Frank. “And showed that we are all pretty much alike: we have the same emotions and the same experiences throughout life, good and bad, sad and happy.”

The company’s dances tell stories that range from the legend of Creator coming to Earth, on to stories based on actual incidents from the present day.

The story that touched Mr. Frank so deeply was “The Lady of the Moon,” a retelling of a classic legend. It’s a sad, romantic story in which the lady drinks a potion which gives her eternal life, thinking her husband would be joining her. But they are parted forever.

Marcia felt the dance “Fairies of the Sea” was outstanding. In this piece, the dancers’ long silk fans twirl and flutter like rippling waves. She thought the music, dance, and emotions of the dancers were very beautiful.

Mr. Frank hopes he can see the performance again. “This is an experience that I will never forget,” he said.