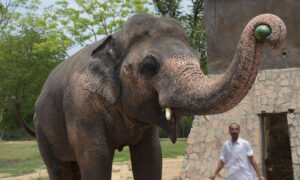 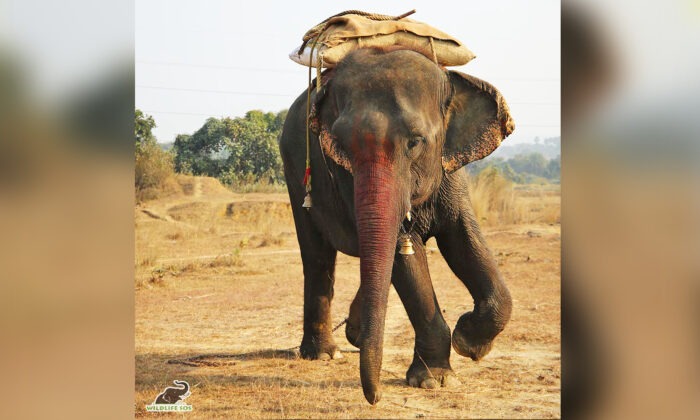 An elephant that was once force-fed alcohol by her abusive owners to keep her “under control” has been rescued by an international animal charity.

Adorned with heavy ornamental gear, the 40-year-old Indian elephant, Emma, was forced to walk over 300 miles in poor health. The elephant was used by her owner for lucrative ventures ranging from begging, to religious processions, to wedding ceremonies, and to giving rides to tourists, Wildlife SOS India said in a statement.

At night, Emma was “tightly restrained,” which prevented her from lying down and having some rest.

“[She] was regularly force-fed crude country liquor to force her to work despite the pain in her legs,” Wildlife SOS said.

After Emma was trafficked illegally across state borders into Jharkhand, in eastern India, the Forest Department caught wind of Emma’s plight and intervened, charging her owners with neglect and violation of wildlife legislation.

Emma’s negligent owners claimed to the Forest Department officials that they couldn’t afford medical care for the ailing elephant. Officials discovered that Emma had been subsisting on an unhealthy diet of sweets and fried foods.

The Wildlife SOS said in the statement that it is not unusual for private owners to force-feed alcohol and tobacco to captive elephants as a “home remedy” for health complaints.

“In reality, elephants cannot metabolize alcohol, and it is toxic for the animal,” the organization said. “Such callousness can also cause inebriation, which could result in the elephant running rampant across a crowded area, endangering the lives of innocent bystanders.”

The forest department decided to urgently transfer Emma to the elephant hospital at Wildlife SOS due to her deteriorating health.

After gaining written permission from the chief wildlife wardens of both Jharkhand and Uttar Pradesh states, the nonprofit made plans to transport ailing Emma to its elephant hospital in Mathura for urgent medical care. The big move happened on New Year’s Eve 2020.

A team of Wildlife SOS vets and elephant care staff made the 1,000-mile journey to Jharkhand in a specially outfitted “elephant ambulance” before making the journey back with Emma over a number of days.

Wildlife SOS co-founder and CEO Kartick Satyanarayan said: “We had to act quickly so Emma could get the medical care she so desperately needs. The fact that she was force-fed alcohol by her owner shows the immense cruelty and neglect she has faced all these years.”

Wildlife SOS tracked Emma’s journey all the way from Jharkhand to hospital, and beyond, in a series of posts on its website.

The elephant was immunocompromised as a result of decades of malnourishment and had a habit of lifting her forelimbs to “compensate for the severe pain in her legs caused by years of abuse.” The joints of her forelimbs had degenerated as a result.

Wildlife SOS co-founder and secretary Geeta Seshamani said: “We are relieved that Emma has arrived safely at the Elephant Hospital. As her condition is quite critical, our veterinary doctors have already started with her medical treatment.”

“Years of neglect and abuse has taken a toll on her health,” said Wildlife SOS Deputy Director of Veterinary Services Dr. Ilayaraja.

Mercifully, Emma will never have to suffer such conditions again.

Posting on Facebook on Jan. 12, Emma’s care team shared an update: “Watermelon, cauliflower, and a splash of pumpkin … these are a few of Emma’s favorite things.

“Emma has undergone tests at the Elephant Hospital with extreme patience,” they wrote. “She’s been taking her time getting used to her surroundings, but has become calmer with each passing day.”

Wildlife SOS has been in partnership with the government and indigenous communities to protect wildlife across India since 1998.