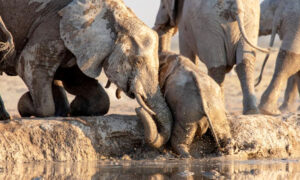 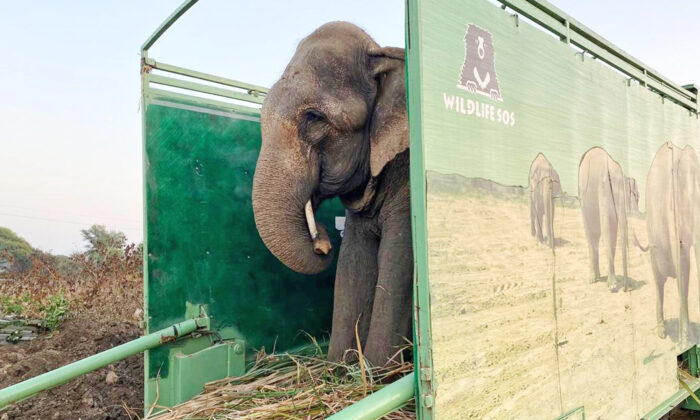 A 50-year-old elephant is finally free after being forced to beg for four decades on the streets of India and after having walked over thousands of miles with his hind legs bound by spiked chains.

The elephant begged walking in shackles across the Indian capital city of Delhi and in the states of Punjab, Madhya Pradesh, and finally in Rajasthan, where the state’s forest department seized the animal from his owner on the grounds of cruelty and neglect.

The tragic ordeal of the bull elephant, named Jai, which means “victory” in Hindi, came to an end when the Rajasthan Forest Department (RFD) followed up on allegations of mistreatment, the Wildlife SOS told The Epoch Times in a statement.

The Wildlife SOS, a rescue and rehabilitation nonprofit, was contacted by RFD after seizing Jai from his owners; the organization immediately offered the suffering jumbo treatment and safe refuge.

An elephant care team transferred Jai to the Wildlife SOS Elephant Hospital in Mathura on Dec. 10. With a specially designed elephant ambulance leading the convoy, the vet team was able to provide immediate relief to the ailing elephant on-site before preparing him for the long journey home.

Wildlife SOS co-founder and CEO Kartick Satyanarayan voiced gratitude for the RFD’s intervention and the written permission from the Chief Wildlife Wardens of Rajasthan and Uttar Pradesh that allowed Jai to be seized.

“To see the spiked chains embedded deep in the legs of this elephant was a horrifying sight,” Satyanarayan said in the statement. “The life of a begging elephant is riddled with pain and they suffer severe mental stress that takes years to heal.

“Now that Jai has arrived safely at the Elephant Hospital we can ensure that he gets the life he deserves,” he said.

The Wildlife SOS co-founder and secretary, Geeta Seshamani, said that “the use of spiked chains is illegal.”

“When pulled, the spikes tear at the flesh and create immense pain for the elephant and this is how they are controlled, using pain and fear,” she said.

Besides the infected wounds on his legs, vets ascertained that Jai had suffered immense psychological trauma. He is partially blind in his left eye and has only partial vision in his right.

Jai was malnourished and refused to eat. He also had severely damaged footpads and painful inflammatory osteoarthritis.

The vet team devised a treatment plan including medical and psychological care, plus a brand-new diet, immediately.

“Jai has only ever been fed dry fodder,” Wildlife SOS said in a news update. “The first time he was offered sugarcane and papaya, Jai’s delight seemed to have no bounds.”

“We’re now treating him to delicious, fresh fruits and vegetables that are a major variation from his regular meals of dry fodder and he seems to be loving it!” the organization noted.

Jai will enjoy the safe environs of the Wildlife SOS Elephant Hospital in the city of Mathura as he embarks upon his journey to recovery. The site was established in November 2018 to care for sick, injured, and geriatric elephants across India.

On Dec. 16, Wildlife SOS updated on Jai’s progress on their social media page. An X-ray found calluses on his hind limbs and pus in his toenails, indicating infected abscesses, for which he is being treated.

“We’re doing our best to make him comfortable, but as he’s in a completely new environment with new faces, smells, and sounds, he is still learning to trust those around him,” they said.

But the way to Jai’s heart, the team discovered, is through his stomach. “[A] steady supply of fresh apples and papayas is available at hand to act as incentives,” they shared.

In their latest update on Jai’s health, Wildlife SOS said on Dec. 20 that the team is taking good care of their jumbo.

“Apart from regular laser therapy sessions and wound dressings, our veterinary team has started the treatment for dermatitis in Jai’s ear pinna,” they wrote. “He has developed a bond with his caregiver and has begun acknowledging him each time he is around.”