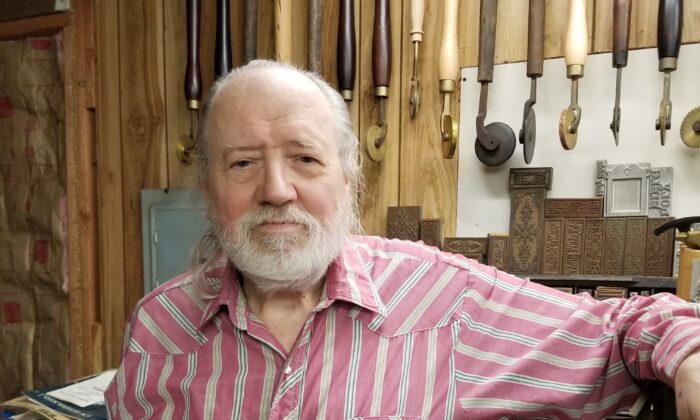 There it sits on a bookshelf in the den, that 150-year-old King James Bible once owned by your great-great-grandmother, the family genealogy duly recorded in the front pages. The binding is frayed, the once rich red cover now turned nearly black from usage. You look at that book every once in a while and tell yourself you’d like to have it restored.

Or maybe you want to give your husband, who loves all things medieval, a journal with the appearance of a ledger book from the late Middle Ages. Where do you find such a thing?

You might try Clifton, Tennessee, home of Edward Stansell, bookbinder and book restorer.

A Self-Taught Master of His Craft

Stansell’s father, Arnold, whom friends called A.D., was working for city hall in Wilmington, Delaware, in 1952 when a fellow employee asked him to take up binding country record books. At an early age, Stansell began working with his father in this trade, and he took over the business after his dad’s untimely death in 1959. The quality of his work spread by word of mouth, and soon people were bringing him books in need of repair.

Eventually, Stansell was making his living binding books for individuals and for such outfits as the library of Longwood Gardens. Other than what he learned from his father, Stansell, now 78, is self-taught in the art of book restoration. As his reputation grew over the years, customers came to him from across the United States, France, Australia, and other countries, including Mongolia.

His customers have even included the famous. Stansell’s most satisfying job, he said via email, was to leather-bind the scripts for Robin Williams’s movies. “He gave them as ‘wrap gifts’ to the cast and crew and auctioned the extras for charity,” he said. Stansell made about 250 for each movie, worked with Williams for 11 years, and even got to meet him while Williams filmed “Dead Poets Society” in New Castle, Delaware.

Located in a workshop on Stansell’s property, the Craft Bookbinding Company is very much a family operation. Stansell’s wife of over 50 years, Sandy, is “my most valuable asset” and “my quality control manager,” he said. Of their eight children, five of whom were homeschooled, several have helped in the business. Their youngest daughter, Sarah, currently assists part-time with the binding.

Book restoration often requires the eye of a jeweler, the fingers of a surgeon, and the patience of a saint. With regard to difficult restoration jobs, Stansell explains, “There are from time to time books from hell. When I get one of those, I wonder what on God’s green earth ever made me think I wanted to be a bookbinder.”

In these cases, he tries to save as much of the original binding as possible. This often means lifting or removing for reuse “a weak and brittle leather spine that is glued directly to the back of the book.” He likens this process to removing a coat of paint—intact.

But it can be even trickier: “Sometimes book owners decide to attempt their own repairs. They use Elmer’s Glue or some other nonreversible adhesive, making it near impossible to save the book. I say ‘near’ impossible because after much stress, tribulation, and grinding of teeth, we are able to deliver a book that looks like it has been well taken care of over the years. Then even the job from hell becomes satisfying.”

Let’s look more deeply into the art and craft that goes into such restorations.

Beauty and the Book

On his website, Stansell describes the refurbishment of a family Bible that belonged to his customer’s aunt. It was found in the attic, under the eaves where the roofed leaked. It was so damaged that it didn’t even resemble a book. In  fact, at first his customer thought is was “a block of wood supporting the rafter.” After determining what it was, the customer discovered many familiar names recorded in it and knew that he needed to save it.

Stansell describes its condition and how it was restored:

The embossed boards were delaminated and deformed, which necessitated re-wetting and reforming. The leather was shrunken and extremely brittle. The old leather was chemically treated to produce flexibility. After the text-block was resewn and backed, it was recovered with new leather used where leather was missing. The original leather was then reapplied.

To perform these minor miracles requires diligence and attention to detail. When the pages of a book have stains or foxing (the browning or spotting of paper as it ages), the book restorer must sometimes take the book apart, blot the pages with special chemicals, and then put them into a press to prevent the paper from curling, a process that can take months.

Stansell worked on a small volume that was rescued from the 1981 fire that consumed President Franklin Pierce’s home in Kennett Square, Pennsylvania. Little of the original binding was left, not enough to merit restoring its leather. And the text had been clearly damaged by fire, smoke, and water.

The restoration was an elaborate process: It “called for disassembling the text-block, then washing and bleaching, followed by deacidifying and resizing of the pages. The pages were put in proper sequence and resewn onto raised linen cords. Silk head and tail bands were hand-woven onto the text-block. The original boards were flattened and reused and covered with calfskin which was marbled employing the ancient method of using various chemical salts sprinkled onto wet leather to form various shades and patterns.”

Today, the craft of bookbinding and book restoration is alive and well. North Carolina’s Penland School; the American Academy of Bookbinding in Telluride, Colorado; the School for Bookbinding Arts in Winchester, Virginia—Google “bookbinding schools,” and you’ll find that such schools and apprenticeships abound.

Most books are utilitarian objects, made for reading, yet for some people a book acquires a special and deep meaning. That family Bible becomes a treasure in need of repair, and that journal is a dream waiting to be born. Bookbinders like Ed Stansell and his family are there to restore those treasures and to help those dreams come true. By their craftsmanship, they add to the beauty of our homes and our lives.