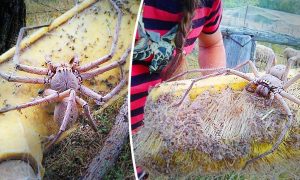 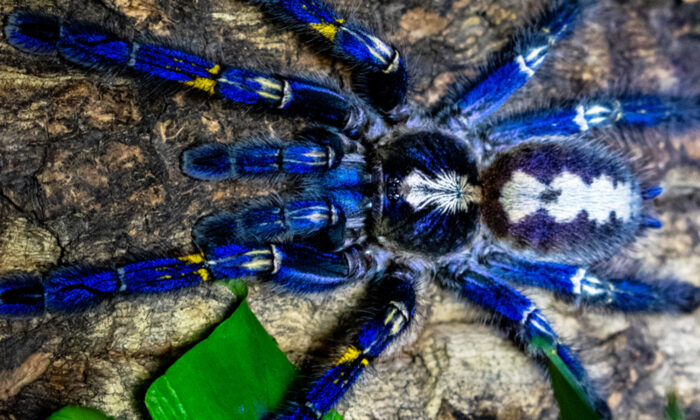 The perennially photo-ready electric-blue peacock tarantula is breathtaking to behold. Its mesmerizing blue hue belies a painful poison, but despite its formidable capabilities, this stunning species may not be around forever.

This beauty from southern India has a plethora of monikers; known widely as the metallic blue peacock tarantula, scientific name Poecilotheria metallica, the spider was first discovered in southeastern India in 1899. The entire Poecilotheria genus is known for its eye-catching colors and patterns, but P. metallica is the only spider that sports such a striking electric blue.

Another of its common names, “Gooty sapphire ornamental,” refers to the railway timber yard in the Indian town of Gooty in the state of Andhra Pradesh where the first specimen was identified, says Theraphosidae.be.

According to The Wild Life, the arachnid’s exotic blue coloration comes from nanostructures on the hairs that reflect blue light rather than the pigment being synthesized by the spider. Depending upon the angle of the observer, the blue peacock tarantula may appear to be several different colors, a characteristic known as iridescence also shared by peacocks and dragonflies.

An arboreal bird spider measuring 15 to 20 centimeters in diameter when fully grown, the peacock tarantula’s primary habitat is the humid tropical forests of South India and West Bengal, notes the IUCN website.

Female peacock tarantulas can live up to 12 years of age; males usually live between 3 and 4 years. However, as trees are felled for firewood and timber, the peacock tarantula’s favored habitat—the cavities and deep crevices of old-growth forests—is gradually being destroyed.

Despite the seductive allure of its electric-blue color, the peacock tarantula has a powerful tool in its arsenal against any predator that gets too close. While the spider will always prefer to flee than to fight, its aggressive “resting stance,” should provide ample warning to any observant onlooker that this creature is ready to defend itself against persistent provocation.

The peacock tarantula’s venom is considered “strong,” says The Wild Life. While not fatal, the venom has the potential to cause immense pain at the site of the bite, headaches, and sweating for up to a week. The main function of the peacock tarantula’s paralyzing bite is to catch its preferred prey, flying insects.

Owing to their unique look, these beautiful creatures have long been coveted as household pets. Authorities took measures to curb the illegal trade of peacock tarantulas in the late 1990s, reports Down to Earth, but into the 21st century, the species has become one of the costliest pets in the exotic pet trade.

Nowadays, the peacock tarantula’s largest active population remains in captivity owing to avid breeding in the exotic pet community. An anonymous U.S. breeder, who claims to be the first to have bred the peacock tarantula stateside, described his elation at discovering that the long-famed “blue tarantula” was more than a myth.

“In 2002, there was a whisper going around among tarantula enthusiasts about a blue beauty of the genus Poecilotheria,” the anonymous breeder said, according to Down to Earth. “At that time the spider seemed to share the same status as unicorns and leprechauns, but then I realized it was more than fiction.”

The stunning spider, despite its popularity among exotic pet aficionados, is not everybody’s cup of tea.

The blue peacock tarantula has been listed by the IUCN as “critically endangered” since Jan. 1, 2008. There has never been a better time to protect and appreciate this ethereal beauty than now.