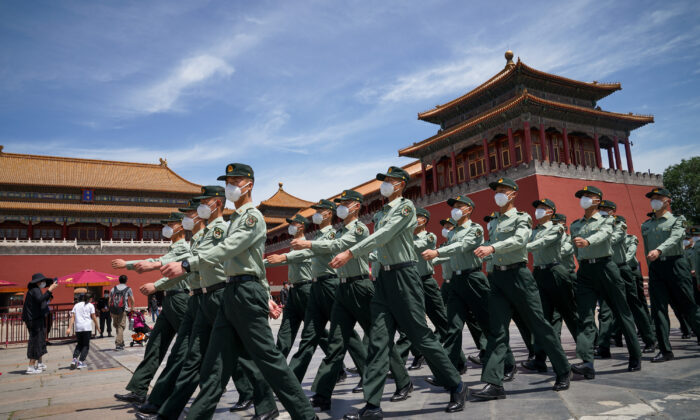 Soldiers of the People's Liberation Army march in front of the entrance of the Forbidden City in Beijing on May 20, 2020. (Andrea Verdelli/Getty Images)

Americans Have Billions Invested in Companies With Ties to Chinese Military

This order, while somewhat limited in scope, ensnares several well-known Chinese companies, including non-public companies such as Huawei and publicly traded companies such as China Mobile and Hangzhou Hikvision. The 31 companies were previously designated by the Pentagon as being “owned or controlled” by the People’s Liberation Army (PLA), the official name of the Chinese military. (The list of companies can be found here and here.)

The action could be a sign of things to come for Chinese companies with close ties to the CCP; U.S. capital could prove increasingly hard to come by. In addition, examining the foreign ownership base of these companies reveals that a number of them are partially owned by prominent U.S. investment firms, insurance companies, and pension funds.

Trump’s latest measure at restricting Chinese companies would prevent U.S. capital from funding China’s military and intelligence agencies that could hurt U.S. interests. It bans U.S. citizens and companies from purchasing new shares of the listed companies beginning Jan. 11, 2021. Current investors who own shares of these companies have about a year, until November 2021, to exit their investments.

U.S. Sen. Marco Rubio (R-Fla.), a notable China hawk, applauded the decision, saying in a Nov. 12 statement that China’s “exploitation of U.S. capital markets is a clear and ongoing risk to U.S. economic and national security.”

An analysis by The Epoch Times of ownership of these 31 Chinese companies reveals that billions of U.S. capital have already flowed into shares of these companies, all of which allegedly have ties to the CCP military or intelligence agencies.

Of the 16 publicly traded firms either on the list or are subsidiaries and related parties of companies on the list, U.S. entities currently hold shares worth approximately $14.9 billion, based on closing prices as of Nov. 20 and latest available public filings data compiled by Bloomberg.

The vast majority of the roughly $15 billion is invested in two of China’s biggest telecommunications giants. The first is China Mobile Ltd., with $8.1 billion invested via both New York-listed American depositary receipts and Hong Kong-listed shares. The company with the second-largest amount of U.S. capital is New York-listed China Telecom Corp., with $2.3 billion of investments. Both firms are believed to have links to the PLA, according to the U.S. Defense Department.

Third on the list is surveillance equipment manufacturer Hangzhou Hikvision Digital Technology Co. Ltd., with $1.7 billion of investments from U.S.-domiciled sources. Hikvision has been criticized in the West for producing equipment used to monitor Uyghur Muslims in the northwestern region of Xinjiang.

Unsurprisingly, investment advisers and fund management firms are the biggest single group investing into these Chinese companies—with $13.5 billion invested—by way of their actively managed mutual funds or passively managed exchange-traded funds (ETFs). They are followed by government and pension funds with $466 million invested, and hedge funds with $406 million invested. Other investor classes with large stakes include insurance companies (for their own accounts) and banks and brokers (likely on behalf of client accounts).

Among investment advisers, passive managers BlackRock and Vanguard lead the pack, with more than $2 billion each in assets held in these names.

The vast majority of the amounts held at U.S. pension or sovereign funds is from the California Public Employees Retirement Systems (CalPERS), which is estimated to have approximately $400 million in investments across several state-controlled companies such as China Mobile, China Telecom, China Unicom, and a variety of smaller stakes in other companies on the list, including rail equipment manufacturer CRRC Corp., China Communications Construction Co. Ltd., and China Railway Construction Corp. Ltd.

The Alaska Permanent Fund Corp., a sovereign fund, is a distant second with approximately $37 million invested across several companies.

These amounts are estimates as some filings could be stale and entities could have exited their stakes since the filings.

Another Challenge for Chinese Firms

Going forward, compliance teams at banks and brokerage firms will need to update their barred lists on behalf of their clients. Investment firms will be banned from purchasing new positions in these companies but have some time to divest their current holdings.

Relatively speaking, these investments make up a tiny portion of U.S. funds, pensions, and insurance companies. Even BlackRock, whose funds own $2.4 billion worth of shares in the 16 companies The Epoch Times investigated, has $7.5 trillion of assets under management in total. That amount represents 0.03 percent of BlackRock’s fund investments.

CalPERS, the U.S. state pension system which has been the most overweight in Chinese investments, also has around $350 billion in total financial assets.

But in an absolute sense, $15 billion of U.S. funding is an enormous amount. It’s very likely that the Trump administration has already pared the list to 31 entities so as to not disrupt U.S. business and investment interests. Expanding the list’s scope even slightly is likely to net far greater investment amounts from U.S. entities.

Shares of China Telecom and China Mobile fell as much as 9 percent and 6 percent, respectively, on Nov. 13 immediately after the Trump administration’s announcement, before eventually rebounding.

This action represents the latest challenge for Chinese companies, some of which already face capital market constraints as Beijing authorities attempt to rein in market speculation, promote fiscal responsibility, and reduce financial leverage.

A string of recent debt defaults at state-owned enterprises have called into question the creditworthiness of local and provincial governments and their ability to backstop defaults. High-profile defaults include those of Chinese chipmaker Tsinghua Unigroup and Huachen Automotive Group, which caused a broader selloff in Chinese bonds during the week of Nov. 16.

So far, contagion has been confined within certain sectors and provinces. But it could be a matter of time that corporate spreads at national champions are impacted. Banning U.S. investors from participating in certain Chinese companies’ capital markets transactions removes a major funding source for such cash-strapped firms. It remains to be seen at what point Beijing will directly intervene.

“Although authorities want market discipline for riskier firms, they [China] cannot know how much credit risk might create broader contagion,” The Rhodium Group wrote in a recent note to clients.

“No one can know this line clearly, given that there is no precedent for this risk in China’s financial system.” 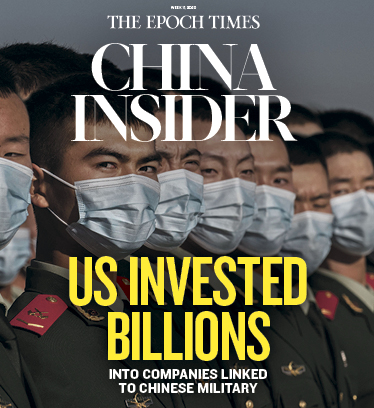 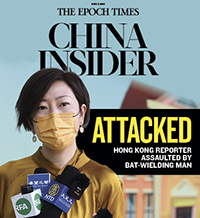 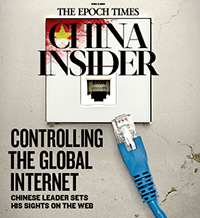 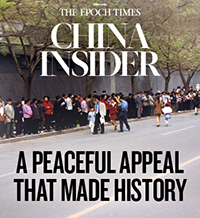