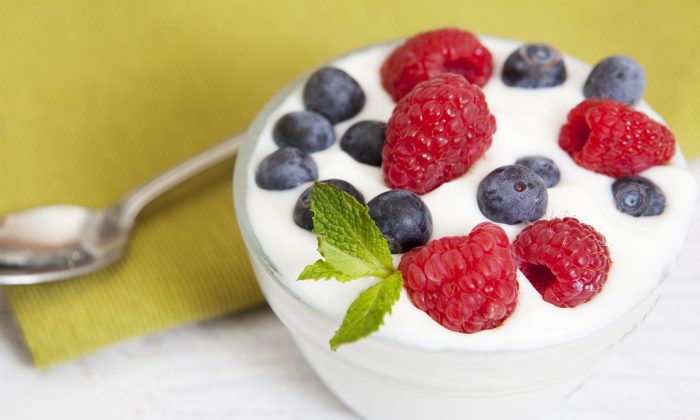 Eating yogurt at least five times a week can lower the risk of developing high blood pressure by almost a quarter. Data from studies involving over 275,000 nurses and 50,000 male health professionals, identified 74,600 doctors and nurses who were newly diagnosed with hypertension during the follow-up periods of 18 to 30 years.

Those who developed hypertension were then compared with those who did not to see if there were any previously unrecognized risk factors. Researchers made statistical adjustments to account for already known links, such as age and family history, exercise levels and beneficial dietary factors such as intakes of fruit and vegetables, milk, cheese, and protein.

The results showed that women who ate five or more servings of yogurt per week were between 17 percent and 23 percent less likely to develop high blood pressure than those who ate yogurt less than once a month.

The link was weaker for males, with no significant association found—mostly because the men studied ate little yogurt over all. The researchers were keen to point out that this doesn’t mean men who do eat yogurt will not derive any benefits.

When looking at other diet factors, the women who ate yogurt gained most benefit if they also followed the DASH diet. The combination of the two reduced the risk of hypertension by around a third (31 percent). For those who followed the DASH diet but did not eat yogurt, the risk of hypertension was reduced by a lesser amount of 15 percent to 29 percent.

Unfortunately no information was available from food frequency questionnaires to differentiate between different types of yogurt, such as fruit or plain, organic or non-organic, Greek-style, full fat, or low-fat.

One likely explanation is that yogurt is a great source of calcium, magnesium, and potassium, all of which have beneficial blood-pressure lowering effects.

Another, factor is that some probiotic bacteria that ferment milk to create yogurt produce substances that inhibit the angiotensin converting enzyme (ACE) in the same way as ACE inhibitor drugs. A similar effect occurs during the production of Grano Padano cheese.