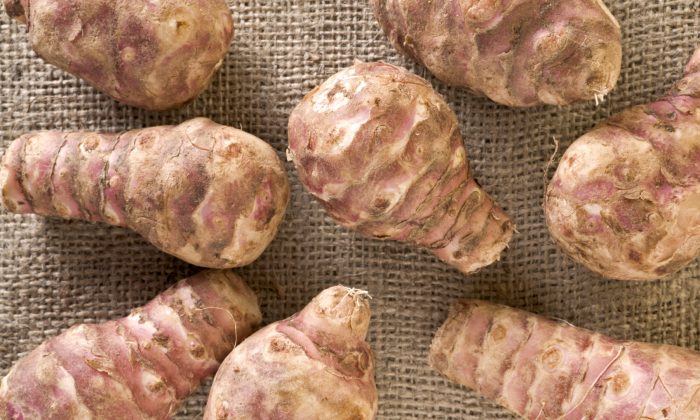 Jerusalem artichoke is a food rich in a special fiber called inulin. (MarkFGD/iStock)
Good to Know

Most everybody knows about probiotics. These are foods and supplements that help strengthen the immune system, and improve digestion.

A lesser known trend in the world of gut health is called prebiotics.

Both prebiotics and probiotics contribute to the health of our microbiome—a name for the diverse bacterial colony that lives inside each of us. The difference is that probiotics provide specific beneficial strains of bacteria, while prebiotics are used to nourish the entire colony of microbes that reside in our gut. Over 400 different “friendly” bacterial strains live in our large intestine, and prebiotics are said to feed them all.

We have about three to five pounds of bacteria in our colon and keeping this colony healthy and happy is essential to our own well being. This beneficial bacteria guards against invading “unfriendly” microbes, and synthesizes important nutrients from the food we eat.

But if we don’t treat our microbiome well, things can turn ugly. A chronically poor diet and even just one course of antibiotics can weaken and injure our microbiome, leaving us vulnerable to infection, leaky gut syndrome, and autoimmune diseases.

To keep our good bacteria well fed we need to eat soluble fiber. One common form of this prebiotic fiber is called inulin.

Inulin fiber is found in many fruits and vegetables. For the plants that manufacture it, inulin fiber serves as a storage system for nutrients. Plants are at the peak of their inulin content in the fall to help them survive the cold winter months. Inulin levels are at their lowest in the spring. Wild plants typically contain more inulin than their cultivated counterparts.

Bananas and grains contain very small amounts of inulin, while asparagus, jicama, onions, and garlic have much more. The richest sources of inulin are found in the roots of plants most of us rarely eat.

Most inulin rich roots are related to the sunflower (known as the composite family of plants). Examples include burdock (a popular root in Japanese and macrobiotic cuisine), Jerusalem artichoke, and dandelion. The name inulin comes from another sunflower relative, the herb Inula helenium (commonly known as elecampane).  Elecampane is the plant where inulin was first discovered in 1804.

The root with the most inulin is chicory—another sunflower relative and a common roadside weed with blue flowers. Chicory root is typically used by herbalists to treat stomach inflammation, malnutrition, and other digestive issues. Roasted chicory is sometimes blended with coffee to offset java’s harsh acidity.

Research indicates that our hunter/gather ancestors had a very inulin heavy diet—as much as 135 grams a day (about 27 teaspoons). Modern diets contain far less (about 10 grams or two teaspoons a day is probably on the high end for most Americans), but the tide is turning in the form of supplements and inulin fortified foods.

In recent years, food manufacturers have embraced a trend of beefing up their products with inulin extract, but not necessarily for its prebiotic virtues. Adding inulin to processed foods boosts fiber content, and adds satiating bulk. It also helps that inulin is natural and generally considered safe by the U.S. Food and Drug Administration. It may appear on the label as inulin, or as oligosaccharide, oligofructose, or chicory root extract.

Another attractive feature of inulin is that it’s sweet. It has about a quarter the sweetness of table sugar or less depending on the plant it’s sourced from (typically chicory, Jerusalem artichoke, or agave). Pure inulin extract is available in capsules or as a white powder which can be eaten by the spoonful, or mixed into smoothies, baked goods, or hot beverages.

Think of inulin more like an intestinal fertilizer than a food. It is a carbohydrate that our body cannot digest so it has minimal effect on blood sugar and is often recommended to diabetics. Unlike most of the food we eat, inulin fiber isn’t broken down by stomach acid or bile, but instead passes through the digestive tract virtually unscathed until it reaches the large intestine where our bacterial colony resides.

Inulin generally improves digestive health, but consuming too much too fast can also cause digestive upset, such as gas, bloating, and intestinal cramps. Inulin powder or even inulin rich foods can be particularly irritating to those with irritable bowel disease, in which even a small amount can make symptoms flare up.

A general recommendation for inulin supplementation is between two and eight teaspoons a day. But if you’re new to this fiber start slow. Begin with a single teaspoon once a day and gradually work your way up to more. If gas becomes a problem, cut back on your inulin intake and increase it more gradually.

How to Make Kimchee

17 Ways to Protect Your Microbiome and Keep Your Belly Blissful

Another concern with taking inulin is that you may also be feeding unfriendly bacteria. Some sources suggest that inulin fiber only feeds our good microbes, but studies have shown that bad bacteria can grow strong on inulin as well. Yeast is of particular concern. Those suffering from systemic candida overgrowth should get yeast under control by taking antifungal herbs such as garlic or oregano before introducing significant quantities of inulin into the diet. In other words, pull the weeds before you fertilize the garden.

Many doctors and other health professionals now recommend daily prebiotic supplements instead of probiotic supplements, since inulin is less expensive and a more holistic way to strengthen gut bacteria. However, inulin is not a replacement for traditionally fermented, probiotic foods, such as sauerkraut, pickles, and yogurt. Make sure to eat these foods often to keep your microbiome healthy and happy.