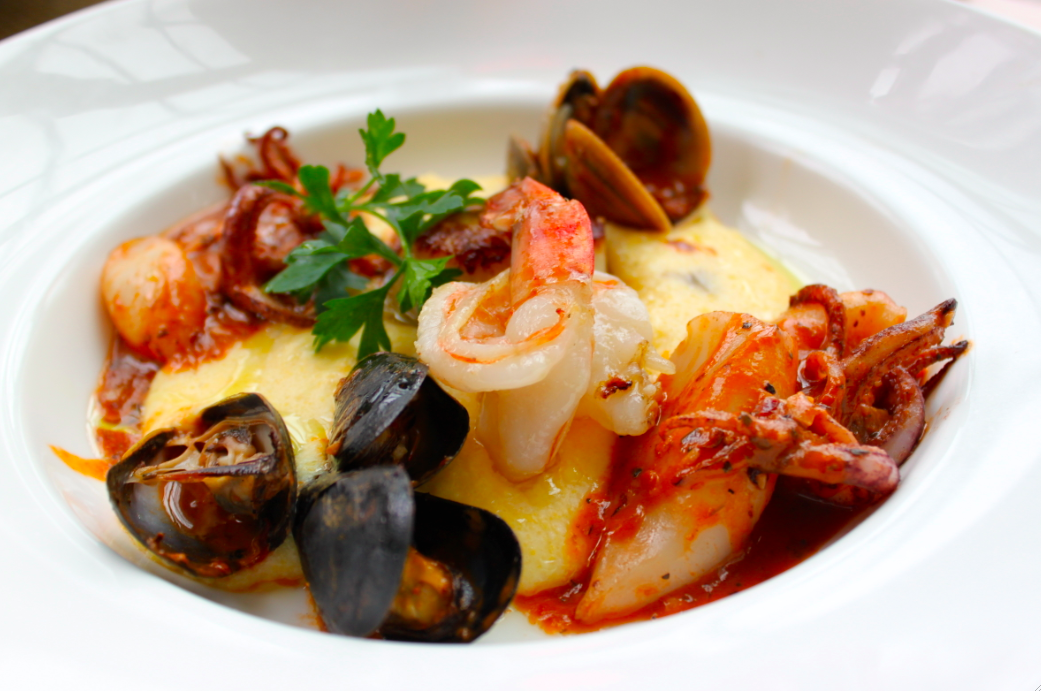 NEW YORK—Chef Roberto Deiaco grew up one of seven siblings, in northern Italy’s mountainous Dolomites area, in the region of Alto Adige. His family owned a farm, and before the age of 15 he never set foot in a supermarket.

He is baffled by the modern phenomenon of being able to get any food any time. “It makes no sense to me. Go by what nature can provide you—work with that,” he said.

At his East 12th Osteria, open since this past March, the northern Italian cuisine is all organic, in keeping with the way he grew up, and some of it even biodynamic. The fish, from the Mediterranean, is line-caught.

On the farm, his mother would spend all day cooking. “I never saw her sit down,” he said. Milk would be turned into cheeses and yogurt.

He’s now taken the mantle, making everything from scratch, baking his own bread throughout service, and making sorbets and ice cream.

Deiaco gets many of his ingredients from Italy, noting they don’t taste the same anywhere else. For example, there’s porcini available from South Africa or California, but the taste is “night and day” for him.

The flavors in the beautiful dishes are by turn bold, delicate, and heady. I had some impossibly light, crispy fried squash blossoms to start with, and then a bold Tagliolini all’Uovo (egg tagliolini, basil truffle pesto), with the heady essence of black truffle.

His sorbets—I had the white peach, coconut, and green apple—tasted just like the fruit themselves, and were accompanied with a striking bright green sauce—pandan. He picked up the use of the herb in southeast Asia, which fascinates him. “It’s like paradise.” His first overseas assignment was at The Oriental, the Mandarin hotel in Bangkok, Thailand.

Produce is currently a month behind schedule—he is just switching to the fall menu right now—and launching a unique new tasting menu, based on his home region of Alto Adige, and close to Austria and Switzerland. It’s a place unlike any in Italy.

Alto Adige is a prosperous, autonomous region—when the rest of Italy goes on strike, everyone in Alto Adige keeps working, said Deiaco.

About a third of the people speak German, one-third speak Italian, and the other third, speaks Reto-roman, an old dialect also spoken in Switzerland, and Deiaco’s first language. Historically at the crossroads of trading routes between north and south and influenced by Asia, the area uses spices, including curry, that are rarely used elsewhere in Italy, besides in Lombardy.

Deiaco brims with enthusiasm at the prospective menu items, from veal cheeks marinated and braised in Santa Maddalena wine, to “tutres,” a barley soup made with little raviolis made with a special dough and stuffed with ricotta and nettles, to canderli pressati in brodo (pressed dumplings in a consommé), filled with zighr cheese, “stronger than gorgonzola,” he said.

He grew even more excited about desserts. “Apple strudel. The apple strudel is ours,” he emphasized. “Not with puff pastry, not like what you see in the store—with real dough.”

Another dessert, which is difficult to make, uses round, sweet Italian apricots, marinated in liqueur; it’s filled with ricotta where the stone is removed; and wrapped in a potato-ricotta dough. The whole thing is then boiled in water and rolled in brown butter and sweet crumbs, finally served with ice cream. “It’s so good,” said Deiaco.