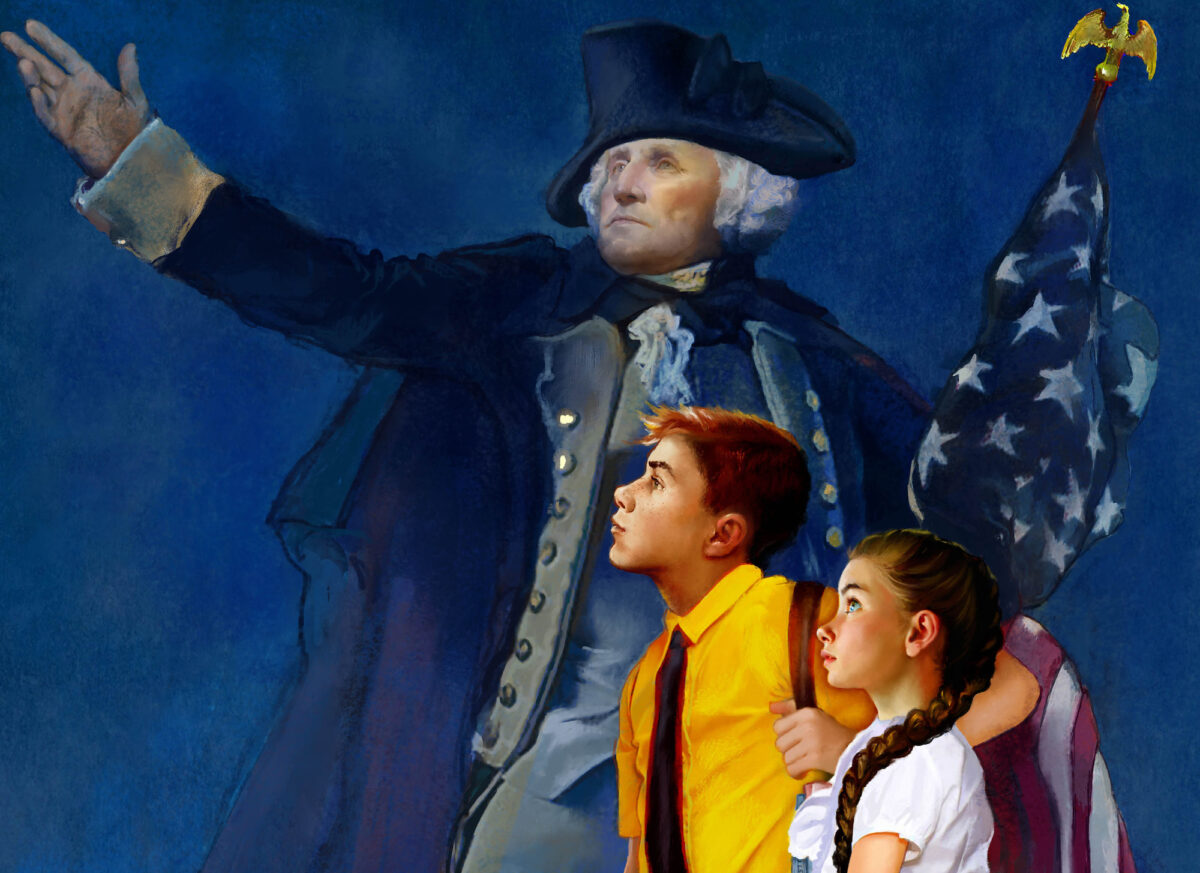 Our rights as Americans—which were hard-won time and again throughout history—come with great responsibility. (Biba Kayewich)
Family & Education

‘Earn This’: Our Rights and Liberties as Americans

Reflections on our nation's heritage and how to pass on its principles to our young people
BY Jeff Minick TIMEJune 28, 2022 PRINT

In the movie “Saving Private Ryan,” Captain Miller and a squad of soldiers are sent to find and extract from combat a D-Day paratrooper, Private James Ryan, whose three brothers had died that week in military engagements. After a long search, they finally locate the private, but must then join other Americans to fight the attacking Germans. They win the battle, but only two men from the patrol survive this rescue of Ryan.

As Miller lies dying, he pulls Ryan close to him and whispers of his men’s sacrifice, “James, earn this.” Sagging backward, with his last breath he says again: “Earn it.”

This request is as old as our country. From the books, speeches, and letters left behind by the Founding Fathers, we hear those words, “Earn this.” On battlefields from Cowpens to Antietam, from Château-Thierry to Iwo Jima to Khe Sanh, the voices of those who fell murmur to us, “Earn this.” From the countless inventors, farmers, miners, teachers, and millions of others who have helped shape the American Dream, if we listen closely, we hear the words, “Earn this.”

Our Lives, Our Fortunes, and Our Sacred Honor

July Fourth is here once again, meaning that 246 years have passed since the United States declared its independence from Great Britain. That declaration was unlike any other in the history of humankind, revolutionary in this proclamation alone: “We hold these truths to be self-evident, that all men are created equal, that they are endowed by their Creator with certain unalienable Rights, that among these are Life, Liberty, and the pursuit of Happiness.” The men who signed that document pledged “to Each Other Our Lives, Our Fortunes and Our Sacred Honor.” In other words, they signed their death warrants in their opposition to tyranny.

Since that momentous day, many men, women, and even children have made that same pledge in their hearts. They were the ones who gave us “amber waves of grain” and struggled to bring “brotherhood from sea to shining sea.” From famous patriots such as Daniel Webster and Theodore Roosevelt to the countless Americans who paid with their sweat, blood, and tears to build this country, all knew in their bones that they were heirs to rights and liberties that allowed them to follow their dreams. Monarchs and dictators might rule other countries, but here, every man was a king and every woman a queen, individuals governed by laws, not by the dictates of tyrants.

And by word and deed, our ancestors passed along to their offspring the responsibilities and blessings of living in such a land. As the immigrant grandmother says of America in the film “A Tree Grows in Brooklyn”:

“Here in this place, each one is free to go as far as he’s good to make of himself. This way, the child can be better than the parent, and this is the true way things grow better.”

That heritage of freedom was taught in our homes and schools and embraced by politicians and newspaper editors.

Ronald Reagan spoke frequently about the fragility of liberty and the importance of its preservation. Long before he assumed the presidency, he delivered these remarks in a speech:

“Freedom is never more than one generation away from extinction. We didn’t pass it on to our children in the bloodstream. The only way they can inherit the freedom we have known is if we fight for it, protect it, defend it, and then hand it to them with the well-taught lessons of how they in their lifetime must do the same. And if you and I don’t do this, then you and I may well spend our sunset years telling our children and our children’s children what it once was like in America when men were free.”

Here Reagan reminds us that we ourselves are responsible for the safekeeping of our liberties and the pursuit of happiness, that we are the ones who must impart an appreciation and gratitude for these gifts to the young. In this passage, he implicitly asks this question: Are we keeping faith with those who came before us, honoring their love for “liberty and justice for all” by passing that torch to our children?

If the answer is no, then surely this Fourth of July is the perfect time to reignite this firebrand and bequeath it to the next generation.

To hand over the ideas of rights and liberty to the young, we probably need to start with some basics.

Sean Salai reported in The Washington Times in “Flag Day Fades From Public Schools Amid Culture Wars,” a recent informal survey revealed that 30 percent of school-age children didn’t know the U.S. flag had 50 stars. Only 45 percent knew the original flag had 13 stars, and less than 20 percent knew that red, white, and blue stand for valor, purity, and justice. (Though I’m not a betting man, I would wager many adults don’t know this last fact either.)

Independence Day provides the perfect teaching moment when we can share such information with the next generation. And if we lack that knowledge, we have hundreds of online sites at our fingertips to help us out.

Just a study of the flag, for example, can drop us straight into our country’s past. What were the original 13 states? Who was Betsy Ross? Why are the colors of our flag red, white, and blue? What songs celebrate the flag? (Here we can choose from “The Star-Spangled Banner” to Johnny Cash’s “Ragged Old Flag.”) What were the last two states to join the Union and gain stars of their own?

On this Independence Day, we might even consider hanging a flag from a pillar on our porch or apartment deck, although as Salai points out, some people today regard the flag as a “controversial symbol.”

Teach Them the Truth

The more we learn about the core documents of our country—the Declaration of Independence, the Constitution, various Supreme Court decisions—and the more we study its story, the more we discover that democracy is messy. We learn, for example, about Jim Crow laws, which made blacks second-class citizens; about the internment of Japanese citizens during World War II; or about the deceptions practiced by our government on Native Americans. More recently, some politicians and corporate heads have become entangled with the Chinese Communist Party, in some cases abetting its policies of forced labor and oppression.

However, as we look at these wrongs, we also learn that, over the years, America has shown a remarkable ability to self-correct when it goes off-course. Self-criticism is innate in a republic such as ours.

But teaching history is only half the battle.

Making Every Day the Fourth of July

In short, they need to learn to think and act like Americans.

July Fourth brings fireworks displays, backyard barbecues, vacations to the beach, and a day free from the office. For many, it’s a great day of family, friendship, and fun. While we enjoy these festivities—and enjoy them we should—let’s be sure to remember those words of Ronald Reagan, and endeavor every day of the year to preserve and earn those rights and liberties bestowed on us by our ancestors.