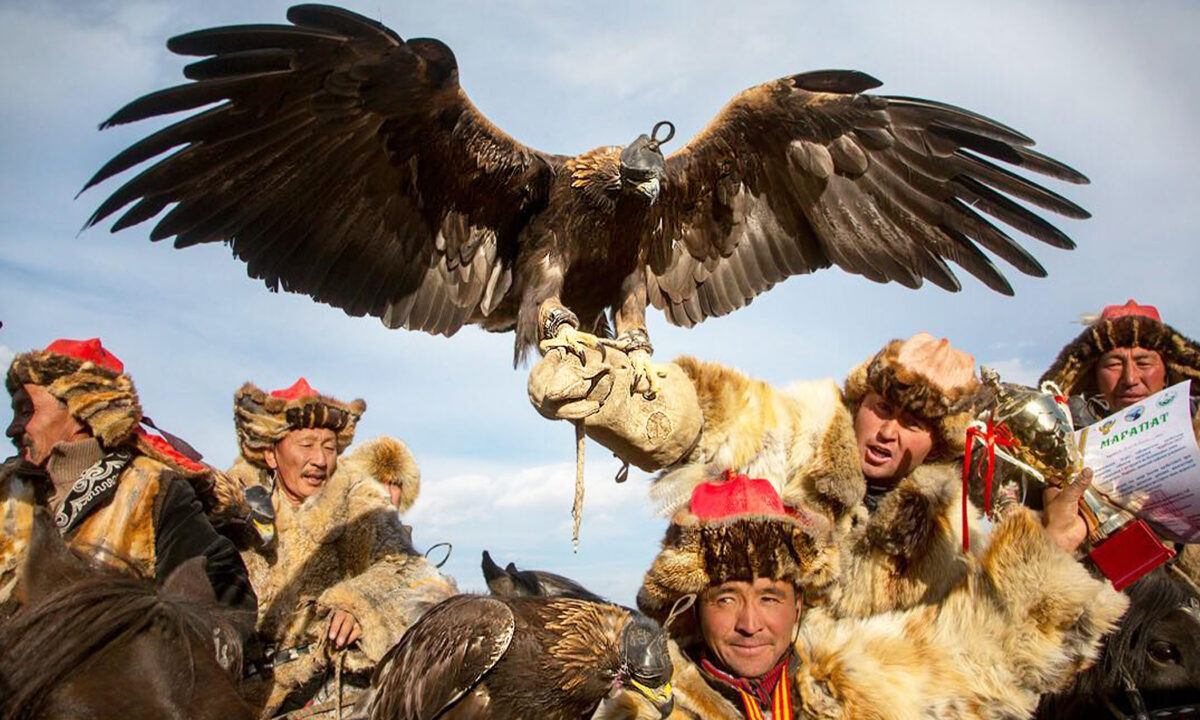 Dutch Traveler Captures Kazakh Eagle Hunters in Breathtaking Portraits: ‘The Eagle Is Part of the Family’

Dutch photographer Wout de Jong has been documenting indigenous Asian cultures whose traditional ways are dwindling and on the verge of extinction.

Traveling to Mongolia, de Jong captured some of the unique atmosphere, skills, and traditions of the once-nomadic Kazakh eagle hunters and recently released his documentary photos. The Dutchman admits that the throngs of photographers, publicity, and tourist industry attracted by the Kazakhs’ yearly Golden Eagle Festival has impacted the people’s traditions, yet there are stories behind the scenes worth telling.

The Kazakhs in Mongolia have evolved from their ancestral selves. These former plains drifters have now turned to farming and tourism mostly, though their unique skills of hunting with eagles while on horseback remains a source of pride in their culture. The Kazakhs’ festival, captured on camera by de Jong, shown here, has become an attraction for tourists—yet he has found positive and beautiful stories in their unique way of life.

During the festival, De Jong, 65, stayed with one of the participants and his five- or six-generation family of eagle hunters. With them, he experienced a unique sense of “caring” that he hadn’t found in the West, and was struck by the relationship between man and eagle that permeated the home. “That was really, for me, the highlight of it, seeing the eagle in its normal environment … and with the hunter at home,” he told The Epoch Times. “You see the eagle—it’s really interesting—it’s part of the family. … It’s in their home and they feed it … [and provide] a lot of attention for the eagle.”

He explained the manner in which they introduce eagles into the clan and reintroduce them back into the wild. “They always use young female eagles, and they get them from the nest, and then they train them,” de Jong said. “And they stay with them about 8 or 10 years, and then they release it again, and then the eagle gets back in nature.”

As for the tradition behind the competition, he said, “it’s about skill.”

The Kazakhs today are caught between two worlds, de Jong added. On one hand, they proudly uphold their old ways; on the other, they’re assailed by modern influences and worldly politics. The annual Golden Eagle Festival, nevertheless, remains a source of immense inspiration for these indigenous descendants.

“It’s the biggest festival, I believe, in the area. I think 60 or 70 hunters were participating,” said de Jong. Now, they use fox skulls and fur drawn by an animal; the eagle has to land on it just like in a real hunt. “In 2015, they abandoned hunting on live foxes, so they only use skulls. … People thought that live animals were used for that, but that’s not anymore,” the Dutchman said. “It’s not good for tourism, but it is the tradition.”

Appearance and spirit is also important in the competition, he said—“how they interact, the hunter with the eagle, the dress they use, the horses they ride on.”

“The festival, it has its ups and downs,” De Jong said. “I liked it, but I didn’t like it all. But what attracted me was the bond between the eagles and the hunters. … There may be a hundred participants, and the eagle always finds his boss.” As the festival attracts many tourists, it is also “good for the Kazakh minority,” he added.

The photographer, enamored with Asian culture, particularly Tibetan Buddhism, hoped to return to Mongolia to continue where the story left off—until the pandemic put a halt to travel. “It’s a continuing story. And when I leave, the movie ends, it’s not the end of the story,” he said. “And that’s what I hope we can do, as photographers, as journalists, to keep the story alive.

“The story has not ended, it’s never over.”