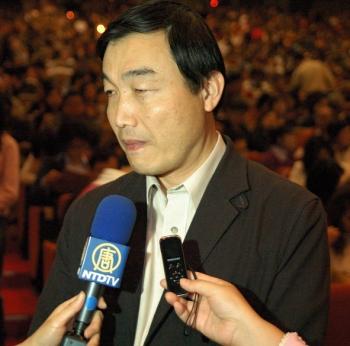 Cultural Affairs Bureau Director: Shen Yun Should Be Recommended to Everyone

By Billy Shyu and Huijing Dong
Print
TAICHUNG, Taiwan—When warm sunshine finally appeared in Taichung on March 8, 2009 after two days of drizzle, Mr. Huang Guorong, director of the Bureau of Cultural Affairs, Taichung City Government, made it to the Shen Yun Performing Arts show in the afternoon.

As the Cultural Affairs Bureau Director of a city rich in culture, Mr. Huang highly praised the Shen Yun’s perfect fusion of Chinese culture, dance, and music. He said, “The Shen Yun show is a high-class performance. Judging from its high attendance for every show and the full house today, DPA should be recommended to everyone.”

Impressed by the Shen Yun’s exquisite production of music, backdrops, and programs, Mr. Huang expressed, “The Taichung City Government has sponsored various artistic activities including dance, visual arts, and others. We know that the most difficult part is to come up with creative ideas. It is amazing that Shen Yun has entirely redesigned all the programs, music, and backdrops since last year. Shen Yun is indeed dedicated. Indeed, we could really learn something from the Shen Yun spirit.”

Among the programs in the first half of the show, Mr. Huang said that he liked Dance of the Snow-Capped Mountain most. “The overall presentation was excellent, and every act was very beautiful. In Dance of the Snow-Capped Mountain, the strength and beauty demonstrated by male dancers were very good. Their excellent dance required very solid fundamental skills. The collaboration of the music and the backdrops was so wonderful that the overall presentation was like the combination of truthfulness, compassion, and beauty,” he continued.

Talking about the implications of the essence of traditional culture, especially those values of allegiance, piety, compassion, wisdom, and integrity in the dance, Mr. Huang commended, “Being a cultural worker, I think it is really worthwhile for us to learn something from Shen Yun. I hope Shen Yun is able to perform in central Taiwan in the years to come.”

Read the article in Chinese