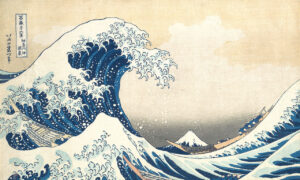 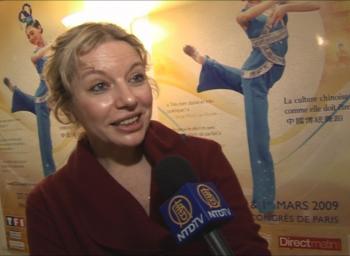 Art Critic: ‘We are not used to spontaneity and this innocent outlook’

Many bemoaned the fact that such beautiful stories from China's 5,000-year-old history had almost been lost, were it not for the DPA artists. Chinese communism has attempted to force the Chinese to forget their impressive history.

Ms. Karia Bogoskala, a Russian, dramatic art critic, journalist, and dramatic arts critic, did not know what to expect when she attended the show. She gladly shared her views.

"My general impression is that it was very beautiful. The dancers were very elegant, even the marriage of colors was absolutely extraordinary. In France, we're not used to this spontaneity and this innocent outlook on the world. … [In general] there is no direct perception of beauty, and when you see this [show], it's magnificent, especially since it has arisen from true belief. Otherwise it would be flat.

"I found that exceptional in the sense that there's classical music, classical dance, and a particular touch of Chinese art with much fluidity. We feel that there's a lot of work behind that fluidity, and in Chinese dance there is an art and a technical side, in the noble sense of the term. I like the singers and the music with the traditional Chinese instruments and it's a change from the usual classical music."

Ms. Bogoskala eloquently spoke of one of her favorite dances in the show: "There is a dnce that particularly touched me and it's the one where the prisoner forgives her persecutor [Dignity and Compassion]. I thought it was superb, because it's a good lesson for humanity regarding certain dictatorships. It's exceptional! It's the scene that I really appreciated, as well as the one about Spring [Welcoming Spring]. Very colorful and beautiful!"

'There was a culture that has been stomped on, and is now reviving'

Carole and Elisabeth, members of the Air France pilot trade union, were astounded by the millennia-old art form they had seen for the first time.

They had come to this show because it promised something new and something that would help them understand more about a different culture.

"The very interesting point in this show is to see the different dances from different regions and times. We especially liked the drums. That was very surprising.

"We loved the grace linked to the posture of the dancers, the harmony, the softness of movements. One can feel a very strong cohesion in the group. We can say 'bravo and congratulations,' one can feel that each dancer is a full part of the whole. That was soft and fluid, but one can imagine the amount of work necessary for this result.

"We came to have new sights, and this is what we obtained. By the way, it was very good to have hosts guiding us in this trip. Through this show we can see that behind Mao there was a culture that has been stomped on, and is now reviving."

Ms. Verrett Paquita from Corbeil Essone City, an insurance manager and former assistant manager at the Paris Opera, was equally impressed by what she had seen.

"That was extremely entertaining, especially after a full day at work—we arrive here in another world. It is very colorful and joyful, one can feel both respect and serenity, respect for tradition and Chinese civilization, all of this displayed during the whole show," Ms. Paquita said.

She said, "It is the first time [I have seen the DPA show] and I'm very happy to be here in the midst of [traditional] China. There is more grace here, something I don’t find as much in Western classical dance."

Ms. Yannick Pipon, assistant communication manager at the Paris Opera, took time out of her busy schedule to see this show. She wanted to share that she was most touched by the piece Dignity and Compassion.

"I did like the scene where [the Falun Dafa practitioner] is in prison, because she is able to show compassion for her torturer, I found that marvellous from a humane point of view," she said.

Feb. 27 was the opening night for the DPA in Paris, with the final show performing on Mar. 1. The DPA will continue its European Tour in London, UK, from March 3–7 and then Aarhus, Denmark, from March 9–10.

With reporting from Sound of Hope Radio.
NTDTV contributed to this report.