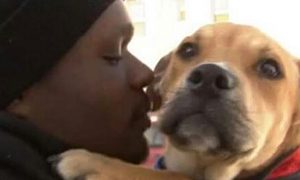 Detroit Man Who Chose Sleeping on the Street to Abandoning His Dog, Reunited with Beloved Pet
0

Dog Dubbed a ‘Hero’ After Helping Save Elderly Man From Drowning

A dog has been called a hero after he helped rescue an elderly man from drowning in northern California.

Pittsburg Police wrote on Facebook that the man slipped and fell into a marina while he was out taking his morning walk on Wednesday, Jan. 24.

A Golden Retriever called Moe saw what happened and barked to alert his owner, who woke up and saw the man struggling in the water.

As a result, the man was rescued and was “extremely grateful to his new barking buddy,” the police wrote.

They also visited Moe and his owner later that same day and wrote that the dog “is about as sweet as can be and clearly loves the attention he is receiving.”

“Good job Moe! We are proud to say you really are a hometown hero!”