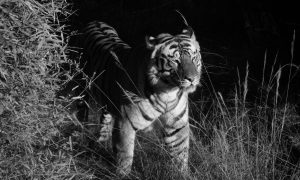 Wildlife Gives a Wake-Up Call for Our Survival
0 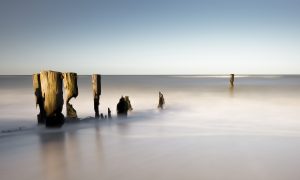 In his work as a researcher for Human Rights Watch, Samer Muscati travels the world. Much of his work concerns women’s issues. He is also a skillful photographer. That, too, is part of his work. “The Unfinished Revolution,” an exhibition currently showing at the Human Rights Research and Education Centre at the University of Ottawa, makes plain the value of Muscati’s photography.

The photographs include imagery from Africa, the Middle East, Cambodia, and Canada. In all, there are 34 photographs from eight countries that have been selected from ongoing investigations.

A fearful street mural is the subject of one large Libyan photograph. Painted on the side of a building, the mural depicts a fighter, with bared teeth, holding a Kalashnikov rifle aloft. He is draped in ammunition and wears a Libyan flag pendant. Off to the left of the photograph, a veiled woman stands. She does not look at the mural. Why would she?

Three black-and-white photographs from Sudan are of women sitting, each a dark, controlled study of grief, dislocation, loss.

Many of Muscati’s photographs are portraits. Three black-and-white photographs from Sudan, for example, are of women sitting, each a dark, controlled study of grief, dislocation, loss. They sit with hands folded—hands as empty as their faces. The women come from the Blue Nile and South Kordofan states of Sudan. In 2011, the Sudanese government resumed bombing. Once more, the women know rape, destruction, and murder at governmental hands.

Earlier this year Muscati was sent to Dohuk, Iraq. There, he interviewed 20 Yezidi who had fled ISIS’s depravities. Three photographs show us their faces. In one, a little girl, perhaps 5 or 6 years old, stares steadily at us. No smile for the camera. In another, we see an old man, too heartsick even to look at the photographer. In the third, a woman looks out from the balcony of a bomb-blasted, bullet-riddled building. She is airing cheap mattresses, tossed over the railing.

In 2012, Muscati travelled to Prince George in northern British Columbia to research the reported abuse of native women and girls by the police. One of the five Canadian photographs in this portion of the exhibition is that of a broken wooden board. It was tossed away into the brush beside the road. Mounted on the board are seven photographs, all of the same young woman. Her face has been bloodied and very badly bruised. The woman, aged 17, was handcuffed, then repeatedly punched in the face by a member of theRoyal Canadian Military Police.

In another photograph, we see a woman standing in a parking lot. On the back of her T-shirt, is written: “Prince George Home of Police Brutality.”

When Muscati is researching a situation, whenever possible, he asks the subjects of his photographs to choose the image he should use in his report. These are also the photographs displayed in the exhibition.

At the exhibition opening on Nov. 4, Muscati was asked, “If there is one thing you could change in all these places, what would it be?”

“I would change men,” he replied.

Human Rights Watch, a nongovernmental organization, was founded in 1978 as Helsinki Watch to investigate and document abuses of human rights in the Soviet bloc. Today, the organization’s investigations are active all the world over in 90 countries. The goal of its investigations is to bring perpetrators to justice.

In his address at the opening, University of Ottawa president Allan Rock characterized the work of Human Rights Watch as “a global network reporting reality in a reliable way.”

Maureen Korp, Ph.D., is an independent scholar, curator, and writer who lives in Ottawa. Author of many publications, she has lectured in Asia, Europe, and North America on the histories of art and religions. Email: miki.korp@gmail.com