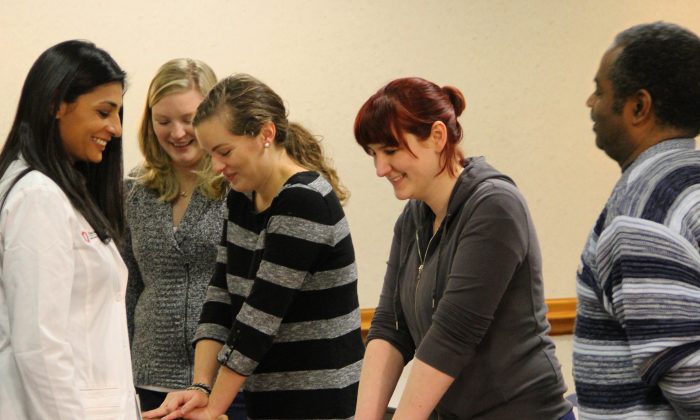 Nearly 400,000 Americans a year suffer a cardiac arrest—an often fatal condition where the heart suddenly stops beating. Only about 8 percent survive the ordeal.

Cardiac arrest is a leading cause of death for people over 40 years old, but doctors said chances of survival can double or even triple if the victim receives immediate CPR (cardiopulmonary resuscitation).

Although many Americans have been trained in CPR at some point in their lives, researchers found that only about a third of cardiac arrest victims received CPR when bystanders were present. Fears of doing it wrong or hurting the victim make many—even those who are medically trained—hesitant to try the technique when a crisis strikes.

To improve compliance, the American Heart Association and doctors across the country are promoting a simplified form of CPR. Unlike older methods, there is no counting or mouth to mouth involved, just two simple steps: Call 911 and do chest compressions until help arrives.

Resuscitation techniques have been around for a few hundred years, but they have been regularly refined and updated to foster a method that is both easy and effective. The latest incarnation is called “hands-only CPR.”

The ideal rhythm is fast: about 100 beats per minute, or the tempo of the Bee Gees’ disco classic, “Staying Alive.”

The focus of hands-only CPR is chest compressions—a technique in which the hands are laid, one on top of the other, over the center of the victim’s chest and then pushed down repeatedly, about two inches deep. The ideal rhythm is fast: about 100 beats per minute, or the tempo of the Bee Gees’ disco classic, “Staying Alive.”

Chest compressions manually pump the heart so that blood and oxygen can continue to flow to the rest of the body, especially the brain, until emergency responders arrive with a defibrillator.

According to Dr. Ruchika Husa, a cardiologist at Ohio State’s Wexner Medical Center, the hands-only technique may be simplified but it can still save lives.

The CPR method previously taught to the public involved blowing air into victims’ lungs every 30 chest compressions to provide extra oxygen. But the intimate nature of mouth to mouth resuscitation was often just another obstacle for a public already squeamish about performing CPR.

Husa said that if bystanders are comfortable with the classic CPR method they can still use it. But she said that focusing on fast, deep chest compressions are the key to patient survival.

“In the first few minutes of the cardiac arrest the lungs have enough oxygen already. So if you can circulate that oxygen by pumping their heart that would suffice in terms of oxygenation,” she said.

Drownings, drug overdose, and small children are cases that still require mouth to mouth. But hands-only CPR works for all other teens or adults who experience a cardiac arrest—even for people who often require special care, such as pregnant women and those with pacemakers.

“They both need their lives to be saved,” Husa said. “It will not cause the pacemaker to malfunction. We do it for both populations when they’re in the hospital.”

Another common fear people have about performing CPR is that they might break some ribs. Although this can happen, Husa wants people to see the big picture.

“Broken ribs are not a big deal as long as you save someone’s life,” she said. “I’ve never seen a patient complain about broken ribs if they survived from a cardiac arrest.”

Secrets of the Strong-Minded: Can Children Be Made Resilient to Traumas Like 9/11?