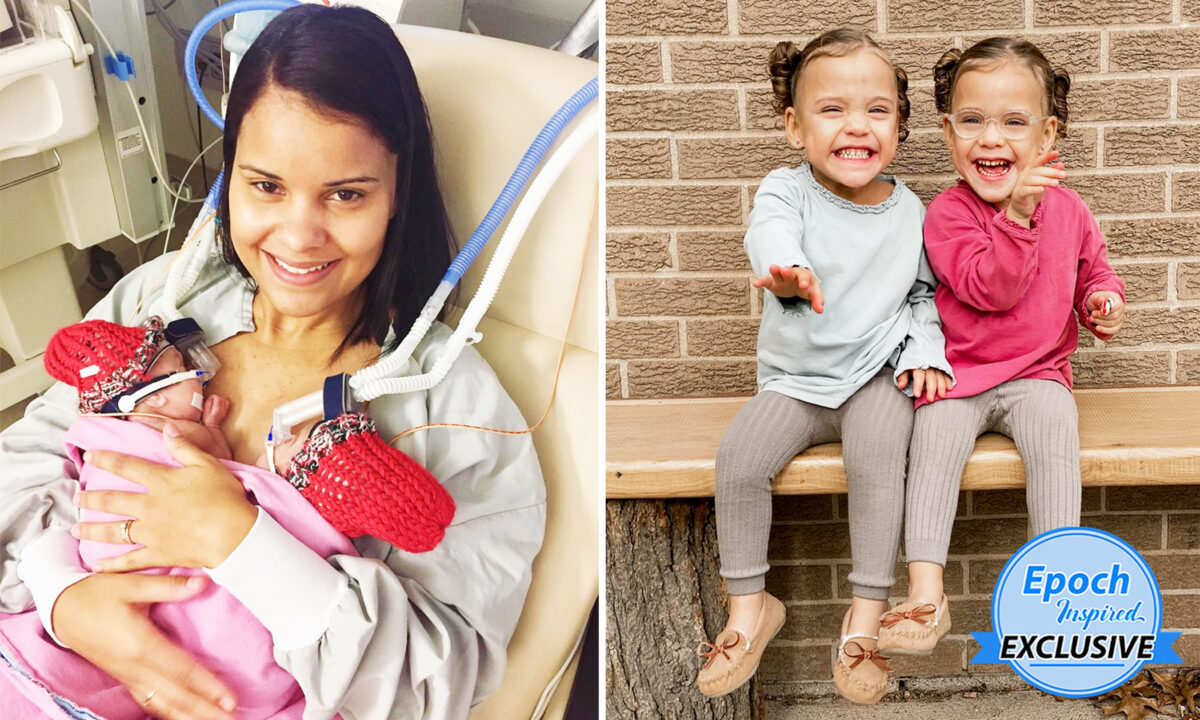 Doctor Said Mom’s Efforts to Save Her Babies Were a ‘Waste of Time,’ Now They’re 3 and Thriving

A mom from Canada who went into labor with twins at just shy of 22 weeks gestation was told by her doctor that they would die the day they were born. However, she refused to give up on her babies, and against the odds, her baby girls pulled through, heading home after 115 days in the NICU.

Now, mom Kayla Marie Ibarra advocates for life at 22 weeks gestation for other preemie babies and their parents.

Kayla and her husband—who have been together since age 18 and were already parents to a toddler, Noah—found out they were expecting twins during Kayla’s six-week ultrasound.

“I was bawling my eyes out and my husband was laughing,” Kayla told The Epoch Times. “He and my mom had suspected twins, based on how sick I was and how quickly I was already showing. I couldn’t even grasp it.”

Kayla described her pregnancy with the twins as “smooth sailing” until the 20-week mark, at which point a gush of fluid convinced her that her water had broken.

Kayla didn’t receive the response she expected, or hoped for, from her primary physician.

“When I went into labor, the doctor told me, ‘The twins will be born today and they will die,'” she said. “I said, ‘Excuse me?’ and she said, ‘Babies this gestation simply do not survive. It’s impossible.’

“I told her I absolutely refused to birth my living children and hold them while they died.”

In a story she shared with Love What Matters, Kayla said, “She told me she wouldn’t let me see the twins, or hear their heartbeats, because it was a ‘waste of time.'” Too angry to pray, Kayla waited with her family in her hospital room.

Her labor lasted four painful days and she begged for medication, which she was denied. To add more trauma to the situation, Kayla was diagnosed with pneumonia. Yet when active labor began at 22.2 weeks on Sept. 27, 2018, hope came in the nick of time.

A new doctor entered the room and informed the couple that they could transfer to a London, Ontario, hospital to deliver the twins. “For the first time in four days, I felt a small glimpse of hope and victory,” Kayla told The Epoch Times.

Kayla said she had never seen babies so small.

From being told the babies were a lost cause to the flurry of activity that followed their birth, Kayla and her family were in shock. The first 40 days in the NICU were the roughest, said Kayla, who called it “very touch and go.”

“[But] the day they were born, I saw the fight written all over them. Every single time, they came back after being resuscitated.”

The twins were in the NICU for a total of 115 days and were discharged even before their due date. Kayla called their homecoming a “victory.”

Since then, her girls have learned to crawl, walk, talk, and feed themselves, all things Kayla and her husband were told they wouldn’t do.

However, the early days were not without their challenges, as Kayla suffered from PTSD watching her babies fight for their lives. But the family was bolstered by their faith.

“We knew no matter how the twins came to us, they were fearfully and wonderfully made in the image of our savior, therefore perfect,” said Kayla.

Today, the twins are thriving at 3 years old. Luna and Ema, who now goes by Rosie, are developmentally caught up to their full-term peers, and their parents no longer adjust their ages.

“They’ve been approved to start school on time with their peers, based on their birthdays. It’s truly remarkable,” Kayla said.

Describing her girls as “strong and brave,” she said, “they conquer things maybe children shy away from at their age and size, like the highest monkey bars.

“Luna is full of spunk; she has my personality, which is both amazing and challenging. Rosie is so funny, and we tell her that she’s truly Noah’s twin, because those two are so much alike!”

To advocate for other severely premature babies, Kayla started a nonprofit, TwentyTwoMatters. The organization provides medical articles and a world map of hospitals that intervene at 22 weeks. They have also conducted radio interviews and worked one-on-one with parents in labor to help them advocate for their kids.

“Because of TwentyTwoMatters, that I run with my co-founder, Amy Hyde, we have seen over one hundred 22-weekers saved who were being denied care,” Kayla said, adding that these babies are capable of so much if given the chance.

“The decision to intervene on a baby born at 22 weeks should rest in the hands of the parents, not the hospital,” she insisted. “Twenty-two does matter, and these children, my children, matter.”

Kayla also shares updates on the family’s life on Instagram.