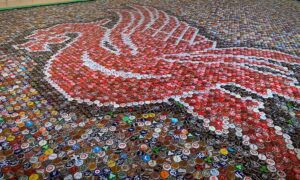 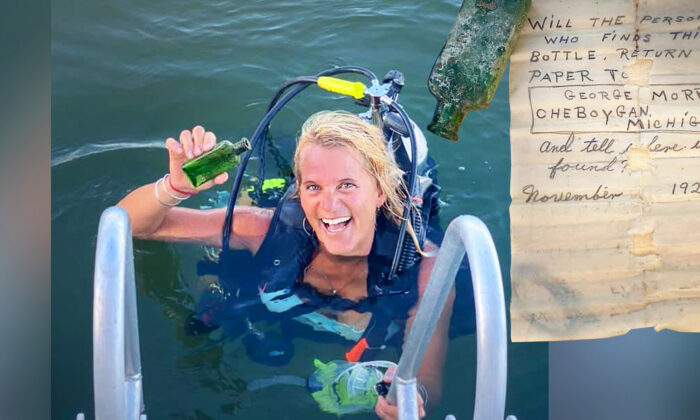 As per her routine, Jennifer Dowker, owner of Nautical North Family Adventures, was cleaning her boat’s windows when she noticed the aged bottle on the river bottom.

“I spotted that green bottle on the top of a fish bed, so I said ‘oh that looks cool,’ so I reached down and grabbed it and noticed there was paper in it,” Jennifer told CNN. “So immediately, I was like ‘alright this is great.’”

Jennifer thought it was just a neat-looking bottle, at first, but upon closer inspection, she could decipher the word “this” on the paper that was folded and sealed inside, she said.

The note, dated November 1926, read, “Will the person who finds this bottle return this paper to George Morrow, Cheboygan, Michigan, and tell where it was found?”

Jennifer, in an effort to trace and return the note to the sender, posted a photo of it on on Facebook.

“So look what I found when I was washing windows and cruising along with the fish…any Morrows out there know a George Morrow that would have written this circa 1926?” Jenifer captioned.

Amazingly, the captain’s post, which attracted some 114,000 shares and 70,000 likes, bore fruit, and she was able to contact George’s daughter, Michele Primeau.

“It was a total shock, but knowing my dad, he would always do little things like when we were building our basement he was putting up the paneling and he put a note behind that,” Michele told the station in an interview.

She added that her dad would have been 17 or 18 at the time and, knowing him, she wouldn’t be surprised if he’d thrown the bottle on his birthday—which is also in November—to mark the occasion.

“I don’t know for sure. But it just sounds like something he would have done,” she told the news outlet.

“I was really hoping to get it back and I was going to frame it and everything,” she said, adding that after thinking about it, she decided to let Jennifer hold onto it. “It’ll make my dad live on if I give it to Jen.”

Meanwhile, Jennifer is pondering what other artifacts are still hiding on the riverbed, just waiting to be discovered.