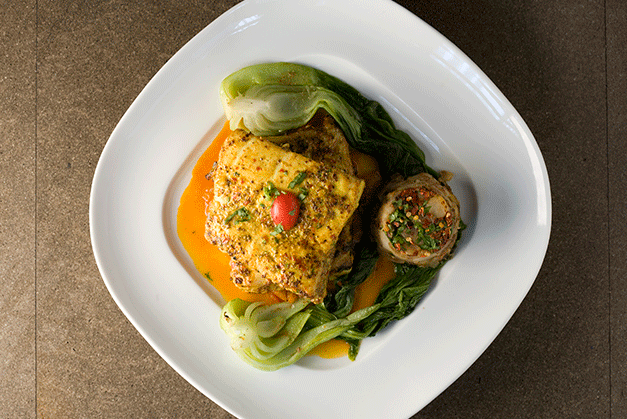 India’s diverse cuisine is informed by its geography as much as by history and religion. The huge country, with a population of 1.2 billion, has been influenced gastronomically by Afghans, Turkish, British, and Portuguese alike.

As far religious dietary restrictions, they are dizzying: some Hindus eat meat, though not beef; some are vegetarian. Jains are strictly vegetarian and many do not eat root vegetables. Muslims shun pork.

The thought of India conjures many images in my mind, from stately monuments to a sea of people, to deserts, mountains, beaches. But when I think of Indian food, I can’t seem to think beyond my local standard Indian buffet and realize I don’t know the first thing about the regional specialities of India.

To learn more, I turned to Avtar Walia for his suggestions of must-try dishes. Walia, who has been in the food business for 36 years, runs the successful restaurants Tamarind, in the Flatiron district, and Tamarind Tribeca, which both feature regional dishes from all over India.

You’ll catch sightings of the Clintons, Woody Allen, and Mike Tyson dining there, for good reason—Walia’s restaurants are among the best in the city. This year, Tamarind is listed as the top Indian restaurant in the 2013 Zagat Survey guide, while Tamarind Tribeca was awarded a Michelin star.

The menu offers dishes from different regional cuisines, with classics, as well as dishes I’ve never heard of. There is no buffet here—the freshness, Walia said, is key, as well as the quality of the spices and ingredients.

Most Indian restaurants in the United States are focused on northern Indian food, which tends to be heavier on wheat (breads), meats, and thicker sauces. Some, in larger cities, offer southern Indian cuisine, which is more based on rice and is spicier (as in hot). Use of ingredients vary by region. Cumin, yogurt, tomatoes are more prevalent in the north; tamarind, black mustard seeds in the south.

Tandoori-Style Dishes
Originally from Punjab, the tandoor clay oven is where you’ll see delicious dishes like kebabs, chicken tandooris, and most breads emerge. Meat, as is often the case in the north, is marinated for hours in yogurt and spices before going into the tandoor, and comes out tender and flavorful.

At Walia’s Tamarind, there are three different chefs attending three different tandoor ovens—one set at 450 F, where 75 percent of the food will be cooked; the second at 425 F, where about 25 percent of the tandoor dishes; and a third one, exclusively for baking bread. Chicken tandoori may be a universal favorite everywhere, but try shrimp or lobster if you can find it. At Tamarind, people love the Jhinga Angarey, jumbo prawns marinated in yogurt with roasted chilies and cilantro.

Rogan Josh
A Kashmiri specialty, brought by the Mughals, who were influenced by Persian cuisine, consisting of braised chunks of lamb cooked in a sauce of onions or shallots, yogurt, garlic, ginger and aromatic spices (cloves, bay leaves, cardamom, cinnamon).

Dal Makhni
Walia remembers his mother’s Daal Makhni, a traditional Punjabi dish, simmering all night. You could cook it in an hour or two, but that overnight simmering of black lentils with onions and garlic, on a slow fire, is key to develop the dish’s flavor and texture.

Dosas
There are hundreds of types of dosas. Made from a batter of black lentils and rice, these fermented crepes come with different fillings and accompaniments, including chutneys and pickles. The Mysore masala dosa, for example, is filled with potato stuffing with coconut and onion chutneys.

Seafood is not usually featured at many Indian restaurants. But it’s a big part of the coastal regions, which are extensive.

Goa, which was occupied by the Portuguese at one point, has its own cuisine. Vindaloo curry, a spicy curry, derives its name from the Portuguese for garlic and wine (vinho e alho). Tamarind Tribeca’s chef hails from Goa, where the quality of the shrimp and lobster is beautiful, says Walia.

The Tamarind restaurants are particularly strong in their seafood offerings, which are quite popular, but they’re not dishes you’d commonly see in India, due to the price tag. Examples are the Malai halibut: halibut flavored with mace, cardamom in a coconut ginger sauce; and the Lobster Masala, with mustard seeds, tamarind, coconut milk, and Madras curry powder.

Indian Snacks:
Not a dish per se, but it would be remiss to not mention chaats. These are Indian snacks of different varieties, which can be had any time of day from street vendors. These savory concoctions harbor ingredients of contrasting textures and flavors.

– The Samosa Chaat, served hot—with a samosa crushed in pieces, topped with chickpeas and gravy, with coriander and yogurt sauce, and sprinkled over with sev (dried, crunchy noodles). It has to be eaten relatively quickly or it starts to turn into a soupy mess, but the mix of all the textures and contrasting flavors is delightful—little fireworks of sweet, tangy, savory, and hot.

Indians have a famous sweet tooth. Desserts are mostly based on dairy. Staff at Rajhbog Sweets & Snacks in Jackson Heights recommend the following:
– Gulab jamun, golden deep-fried balls made with milk solids, soaked in sugar syrup.
– Kaju kati, made with cashews and milk solids—nothing else (to my taste buds, vaguely reminiscent of marzipan).
– Bundi ladoo, a delicious dessert made with chickpea flour.