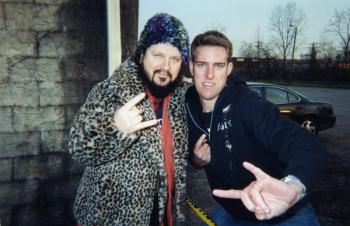 Dimebag Darrell with Kevin McMeans just hours before the fatal shooting at the Alrosa Villa in Columbus, Ohio on December 8, 2004. (Courtesy of Kevin McMeans)
Arts & Culture

BY Benjamin Chasteen TIMEAugust 21, 2010 PRINT
Dimebag Darrell, real name Darrell Lance Abbott, the late guitarist for the band Pantera –and most recently before his death, Damageplan—would be celebrating his 44th Birthday today.

Sadly Dimebag's life ended during the performance of their first song called “Breathing new Life,” when a gunman walked onstage shooting and killing Dimebag and 3 others at the Alrosa Villa in Columbus, Ohio.

“My first impulse was that it was just a stunt or part of the show,” said Kevin Mcmeans to The Epoch Times, who was standing right in front at the time it happen. “I thought it was a roadie doing a prank for the show, but when I noticed the panic and saw the other band members on stage, that is when I realized what was going on.”

A security guard and Alrosa Villa worker, Eric Halk, attempted to stop the gunman, however, both were fatally shot and killed in the process.

The gunman then held the drum technician for Damageplan hostage threatening to kill him if something where to happen.

Police Officer Niggemeyer then stepped in from the side firing and killing the gunman.

The tour manager was also shot by the gunman but luckily survived the attack.

Mcmeans said that no one in the crowd was shot or injured aside from Halk, who jumped on stage to stop the gunman.

Earlier that day Mcmeans waited outside before the concert to see if he could meet Dimbag.

“Usually I don't arrive on time to meet the bands,” said Mcmeans, “But that day I was able to arrive earlier then usually.”

Mcmeans stated that Day Dimebag had on unusual hat that was multicolored, and a leopard print coat.

He also noted it was something he never saw Day Dimbag wear. “I thought he would be one to joke around but really [he] was a down-to-earth humble being.”

Mcmeans thanked Dimebag for taking his picture with him, and said that Dimebag then looked at him and said "This picture would be classic since it is capturing “him” in such a wild outfit."