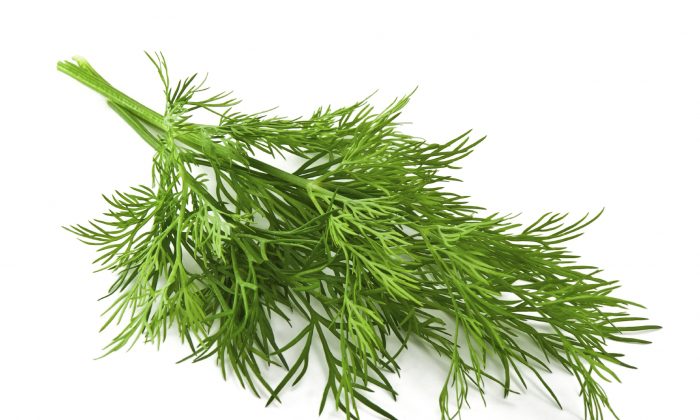 Dill is an herb known mostly for its role in flavoring pickles, but it’s also a safe, gentle remedy for gas, diarrhea, heartburn, and other symptoms of gastrointestinal distress.

There are lots of herbs for indigestion, but dill’s gentle nature makes it a perfect remedy for babies.

In his 1897 book of “Herbal Simples,” Dr. W.T. Fernie writes that the “Cordial waters distilled from the fragrant herb called Dill are, as every mother and monthly nurse well know, a sovereign remedy for wind in the infant; whilst they serve equally well to correct flatulence in the grown up ‘gourmet.'”

The ancient Egyptians and Greeks were both familiar with dill’s anti-gas reputation too. The ancient Roman physician Dioscorides recommended dill for gastrointestinal problems ranging from hiccoughs to constipation.

A 2002 animal study suggests that dill may help protect the stomach lining. Researchers concluded that a dill seed extract showed “effective antisecretory and anti-ulcer activity” indicating a good remedy for acid reflux and a peptic ulcer.

The name dill comes from an Old Norse word, “dylla,” which means “to soothe.” The herb not only calms the stomach, but it is also believed to have a mild tranquilizing effect on the mind, as well. Dr. Fernie recommends a few spoonfuls of sweetened dill tea before bed to quiet fussy, irritable children.

Dill is a member of the carrot family (Umbelliferae), and is often mistaken in the garden for fennel and anise—other carrot family members with fragrant, wispy leaves.

One well known remedy for dill is to balance out a sluggish menstrual cycle. Herbs that encourage menstruation are called emmenagogues, and many plants in the carrot family have this feature.

In his book, “The Green Pharmacy,” Dr. James Duke writes that “The compound apiole in dill is such a powerful emmenagogue that most herbalists I respect warn pregnant women not to use it in medicinal concentrations.” Duke’s prescription for stagnant menstruation is a tea brewed from two teaspoons of crushed seeds.

While pregnant women should steer clear of too much dill, it can be a welcome remedy for nursing mothers. Dill has been used for many generations to help increase milk flow, and dill enhanced milk has the added benefit of calming baby’s stomach.

A single dill plant will produce thousands of seeds, and a 2012 study validates this signature with evidence that dill may enhance male fertility. The animal study, published in the Journal Of Agriculture and Crop Sciences, found that dill seed increased the quality and strength of sperm.

Dill is recommended for those concerned about bone loss because it is rich in minerals, such as iron, magnesium, and manganese. A spoonful of dill seeds have about as much calcium as a small glass of milk.

Dill is also a good source of Vitamins A, C, and folate.

Dill has a gentle, agreeable flavor—a little salty, a little sweet, with a subtle floral quality. The delicate leaves have the best flavor when harvested fresh from the garden.

Dill’s fragrant, frilly leaves go great with fish, beans, yogurt, cheese, vegetables, and tomato sauce but they don’t last long. An unused bunch of dill will quickly turn to mush in the refrigerator. Yet unlike many other herbs, dill doesn’t have an overpowering flavor. So if you like the taste, go ahead and use a lot. Dill pesto, anyone?

The leaves are fine for food, but when it comes to making a medicine herbalists call for dill seed, which look and taste very similar to those of another carrot relative, caraway. You can make a tea from the crushed seeds, use them to flavor vinegar, or simply chew them. Dill seeds are an effective breath freshener.

Dill has yellow flowers that are very attractive to pollinators, such as bees and butterflies. While milkweed is an important plant for Monarch butterflies, dill and other carrot relatives is where the black swallowtail butterfly lays its eggs. The caterpillar is sometimes called a “dill worm.”

In Colonial America, dill seeds were sometimes called “meetinghouse seeds” because children would chew them to keep quiet during long church services.

The Seventeenth century herbalist, Nicholas Culpepper considered dill to be a second rate fennel. Both herbs have very similar properties.