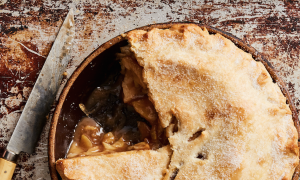 Apple Pie With an All-Lard Crust
0 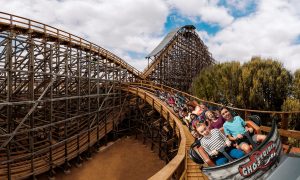 Knott’s Berry Farm: Rides, Boysenberry Pies, and a Celebration of the Old West
0 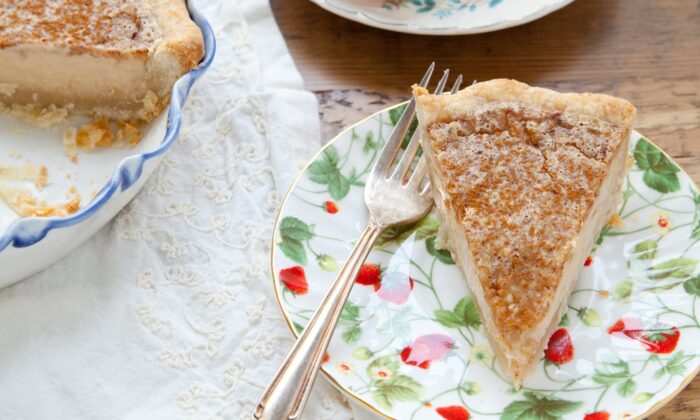 Sugar cream pie, made primarily from sugar, milk or cream, and flour or cornstarch, is a classic example of a desperation pie, dating back to the early 1800s. (Annieseats via Flickr/CC BY-ND 2.0)
Life & Tradition

Desperation pies, make-do pies, Depression pies—nothing about the names sounds particularly enticing. And yet, these desserts can be amazingly delicious.

They’re made from humble ingredients that, when combined, evoke the richness of loftier creations. They also make a perfect balm for these difficult times, when embracing what’s already in the house may be the best move. Vinegar, molasses, canned milk, eggs, unripe produce, and crackers can each star as the “secret ingredient” in a little wedge of comfort.

Although generally credited to clever, cash-strapped cooks of the Great Depression, there’s evidence to suggest desperation pies evolved long before that historical marker.

The first “desperation” had more to do with a dearth of seasonal ingredients than with an inability to afford food. Before refrigeration and global supply lines, home cooks baked fruit pies only when the fruit was in season. No apples, no apple pie. Likewise, other ingredients may have been scarce at various times due to poor harvests, blight, illness, and migration.

As early as 1740, historical archives of George and Martha Washington show recipes and references to chess pie, a now-favorite Southern creation that may have begun as an homage to cheese pie, aka cheesecake. A basic chess pie brings together eggs, butter, sugar, cornmeal, and flour in a crispy crust. No cream cheese or other fresh cheese, no fruit, and very little fuss.

In the Midwest, cooks added apple cider vinegar, or even white vinegar, to sugary custard pies to give the them a slightly tart flavor, reminiscent of lemons.

Indiana’s unofficial state pie, called Hoosier pie, sugar cream pie, or even milk pie, appeared in the recipe collections of Shaker settlers in the early 1800s. The primary ingredients appear in the name of the dessert.

In Pennsylvania, Amish oatmeal pie—popularized during the Civil War era when pecans were scarce—and the molasses-rich shoofly pie were similarly made with household staples.

Farther south, it’s thought that an abundance of late-season green tomatoes, which were unlikely to ripen before cooler weather arrived, inspired thrifty cooks to add sugar and spices to tart tomato slices and bake them into a green tomato pie that pays homage to green apples.

While these early desperation pies—and more—were trotted out again during the Depression years, there is one pie that absolutely is a product of the 1930s. The mock-apple pie, made with butter-flavored Ritz crackers, was a Depression-era recipe that lived on the back of cracker boxes for a couple of decades.

During World War II, desperation pies and other adaptations took on a patriotic edge.

Many items were rationed, so that foodstuffs could be sent to fuel the troops or so manufacturing facilities could focus on the war effort, and households thus often had to do without staple ingredients. Cooks were encouraged to support the war effort and ensure victory by adapting. Wartime cookbooks are filled with “victory” recipes that boasted little to no sugar, eggs, fats, or other ingredients.

In the small-town South, people often raised chicken or had rural relatives who had flocks. “For us, that meant eggs weren’t that hard to come by,” said Ruth Coe Chambers, a novelist who writes tales set in the Florida panhandle. “We could make custard-based pies. Likewise, we might be able to get animal fats from someone with a farm to use in crusts.”

Other ingredients were more difficult. “Sugar was very scarce and I remember women in town trading ration coupons. Someone might be willing to give you some of their sugar coupons in exchange for your coffee coupons,” Chambers said. She noted that cakes and pies of the time often used soaked dried fruit, syrups, and honey for sweetening.

And while no one speaks fondly of wartime food rationing, some do associate the desperation recipes applied with homey comfort.

“Desserts were a very special treat during that time,” said Chambers. “If a woman could put a pie on the table, she felt she’d accomplished something for her family. It was a way to make things seem normal during a scary time.”

Some make-do pies are so rooted in a particular region or culture, people forget that they’re actually subsistence fare.

Sweet potato pies, made from plentiful and inexpensive sweet potatoes, are essential to African-American celebrations and potlucks. Southern slaves grew the crop—which was similar to African yams—and developed the recipes. The recipes followed families into freedom and ultimately influenced the broader American menu. Today, the pies are widely considered a Southern alternative to pumpkin pie.

Likewise, shoofly pie, made with shelf-stable molasses, is considered an Amish treat. The precursor of the pie, a molasses-laced single-layer cake, made its debut in Philadelphia at the centennial of the signing of the Declaration of Independence. As the recipe moved west, Pennsylvania Dutch cooks turned it into a pie.

Cindy Oyler Stavely, executive director of the Colonial Quarter and St. Augustine Pirate & Treasure Museum in St. Augustine, Florida, grew up in central Pennsylvania. She has fond memories of the pies made by her grandmother, Mary Mumper—whom she called Mimi—of Newville.

“She made shoofly and Amish vanilla pie often,” said Stavely. “I remember helping her roll out the pie crust and she always had a small pie pan for the leftover crust. She would make a sugar milk pie in the little pan—she called it Poor Man’s Pie. It was a sweet little extra treat!”

Stavely added that her grandmother never needed an excuse to start baking. “The fact that we were all at her home for the weekend was enough,” she said. “I miss those pies!”

Modern desperation pies have two reasons for being. The first—harkening back centuries—is because ingredients are unavailable. Whether your personal larder is being affected by a world-wide health crisis, or more frequently, by the green-kitchen admonition to eat locally produced, seasonal ingredients, it’s quite possible that you may be trying to find substitutes for recipes that call for fresh berries, apples, or eggs.

The second reason is convenience. The post-WWII 20th century saw manufacturers rush to produce a plethora of processed, shelf-stable convenience foods. Though often maligned by purists, there’s many a child today whose dessert memories will be studded with treats based on ready-made pie crusts, cake mixes, and instant puddings, among other quick and tasty distractions.

“My favorite of these is a lime freezer pie that makes very good use of ingredients on hand,” said novelist Chambers. “It’s primarily just a pack of Jell-O, evaporated milk, and a few other things from around the house. Whip it up and you’ve got a quick, refreshing dessert for unexpected guests.”

The following recipes include some modern make-do recipes, as well as a treasury of dishes that have put households in good stead, dating from the 17th century to the present. You probably have the ingredients on hand for at least one of these modest, marvelous treats.