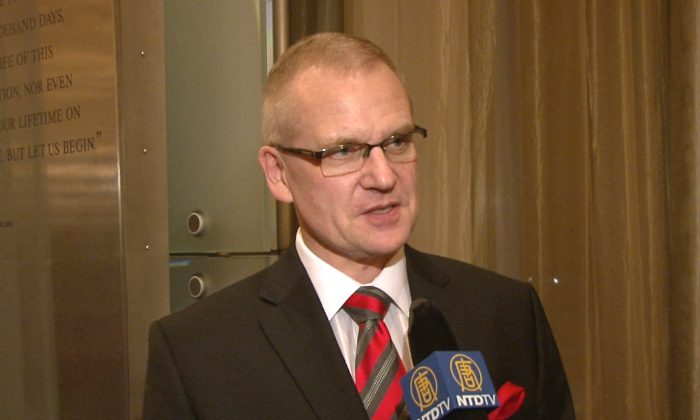 Brigadier General Dirk Backen from Germany is delighted by Shen Yun Performing Arts at the Kennedy Center, on Jan. 25, 2014. (Courtesy of NTD Television)

WASHINGTON—Brigadier General Dirk Backen, defense attaché at the German Embassy in Washington, D.C., came with high expectations to watch Shen Yun and was delighted to see them more than fulfilled.

“I’m absolutely stunned. This show is amazing. It’s a fantastic performance,” he said after experiencing Shen Yun Performing Arts at the Kennedy Center on Jan. 25.

Shen Yun is a New York-based performing arts company with the mission to showcase true traditional Chinese culture at its best. Shen Yun’s world-class artists present classical Chinese dance as well as ethnic and folk dance in a new performance each year.

General Braken said he was particularly impressed with the female group dance pieces.

“The beauty they can show in dance is breathtaking,” he said.

Every performance comprises short vignettes that demonstrate dance styles from some of the numerous Chinese ethnic groups and dynasties; other pieces tell stories based on traditional Chinese legends or inspired by events in contemporary China.

General Braken said he feels close to the Chinese culture. Experiencing it on stage deeply moved him.

“It’s a magic that comes from it, which you cannot explain. It touches your emotions. It goes inside and makes you look with wide eyes,” he said.

Shen Yun follows the traditional belief that Chinese rich and diverse culture is a gift from the heavens, according to the Shen Yun website.

For General Braken, it was his first time listening to traditional Chinese music, an experience he particularly enjoyed.

Shen Yun’s orchestra is unique in integrating traditional Chinese instruments like the erhu, also called Chinese violin with a history of 4,000 years and known to be able to express a range of emotions.