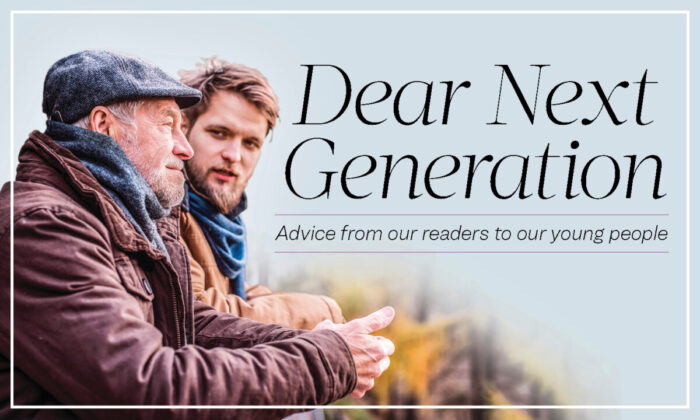 Dear Next Generation: Are You ‘Real’ or Are You a ‘Fake’?

I was born in 1960 and remember the rebellion against authority that spawned from the Vietnam War. That was an unsettled time when people turned away from God and their parents, grandparents, teachers, and governing authorities. The respect for family and moral values was forever changed.

Since that time, television, computers, the internet, and social media have poisoned the American family, which is now hanging on only by the prayers of the last godly generation, my parents, who are in their 80s. How did this happen so fast? Well, we are all to blame. The internet has globally broadened our reach, and local communities are no longer enough validation for young people. Teenagers look to global peer groups of people they will never meet and who may not even be real.

Now, children at the age of 2 are given cellphones for entertainment and exposure to dangerous images, even worse, predators. Dads and moms both work, and the children grow up seeing and participating in activities that are damaging to their young undeveloped brains. Children, in an effort to please, lie to their parents daily, make up stories to tell their friends and teachers, and thus begins the world of fantasy over reality. The children never really learn to cope.

When my daughter was in high school, she asked me how to find a “real” friend; everyone seemed to be acting. I told her to look for friends who tell the truth, in any situation. If they are honest, they are worth having as a friend. She admitted that would not be easy. I remember when telling a lie was catastrophic and left a person feeling guilty and ashamed. The only way to feel better was to ask for God’s forgiveness and undo the lie by telling everyone the truth, even if it hurt. The healing began with repentance to God. No one wants to carry guilt, shame, or anger; these things steal our joy and destroy our lives. God is grooming us for better things. Sure, we will make mistakes, look at King David, not so perfect was he, but David loved God with all his heart and God loved him back tenfold.

Now we are getting to the crux of the matter. Are you “real” or are you a “fake”? To stand up for what is true is not always easy but it is essential to creating a generation of people who value honesty and integrity. Integrity is earned, not bought or fake.

The rebellion in the ’60s is minor compared to today’s racial division and overreaching by the government on our personal freedoms. We are essentially attacking each other within our own borders, and making up stories to justify our actions as we go. If you watch the news or social media and are confused about the truth, you are not alone. We are losing our jobs, losing our schools, and losing our liberties, with no real justification.

Well, the good news is, things are so unsettled that people are turning back to God for truth. During this force down, for lack of a better term, our eyes are being opened. America needs God. Be the generation that repents to God to save our country. We need God to forgive our sins, restore our path, and make America great again!

Be willing to admit when you have made a mistake and offer a sincere apology to anyone who was damaged by your actions. Not an apology that starts “If I have” but a straightforward apology and, where possible, make amends.

Refuse to be driven or inspired by the baying mob. Take the time you need to make your own decision based on your observances and knowledge of what is good. Then stand by your decision, even if you are the only one who does.

Learn what logical fallacies are and how to spot them.

Strive unceasingly to be the person that your friends and family automatically think of when they need honest and effective help.

Don’t wait until you are 18 to experience the working world. In my early teens in the late ’60s, my friend and I shoveled snow from driveways during one snowy winter. It all went well each time until one homeowner reneged on the $4 dollar price that was agreed upon to shovel his driveway from garage doors to the road. My friend was the price negotiator and he successfully held the scofflaw to the terms of the agreed price. These working skills are better learned at a young age, so as to be ahead of the curve at age 18.

My father did not ask me if I wanted a paper route. At age 12, he told me I was going to have a paper route. And so I delivered an average of 75 newspapers a day, six days a week plus Saturday collections for over four years. I made only two cents a newspaper. But Dad made sure I saved most of it in the bank and that two cents a newspaper eventually bought my first car and the insurance to drive it.

Don’t be like the local high school students that I see now in my neighborhood. They and their parents stand at an intersection nearby that has four stop signs. A handwritten sign indicates their cause: Graduation fund, football team, cheerleaders, etc. They stand in the road with a can waiting for strangers to fill the can with cash. My father would never have allowed me to do that.

My family immigrated from Lebanon. My siblings and I are the first generation to be born in America. We were raised in Texas. We were always taught to stand up to greet people who walk into your home (or presence), to look them in the eye, and offer a firm handshake (or hug, depending on the situation) as a warm welcome or greeting.

We were also taught to offer our chair to someone older. A young person would never sit and leave an adult, especially a lady, standing.

My family always taught males to hold the door for females; be it a car, elevator, or entry, a gentleman honored ladies first and offered an elbow when appropriate. Same with an elderly man, they were offered the courtesy of being
first through the door, or to sit down after any ladies. Men took their hats off at the table, too!

All these were simple, common courtesies we lived by that one rarely sees anymore. I miss those.

Also, we always wrote a thank you note for gifts received. Always.

It’s OK to be wrong. Being right all of the time is way overrated. Stop defending your position without listening to an alternative perspective. You might realize that you were wrong about something and you now have a chance to adopt a better perspective. If you don’t, others will realize that you are just a fool and you will be stuck in a fantasy world by yourself where you are always right.

Listening and thinking critically for yourself are important to develop humility, which is a rare commodity in today’s world. Set yourself apart, be humble, always learning from mistakes and growing in wisdom. The world needs that version of you!