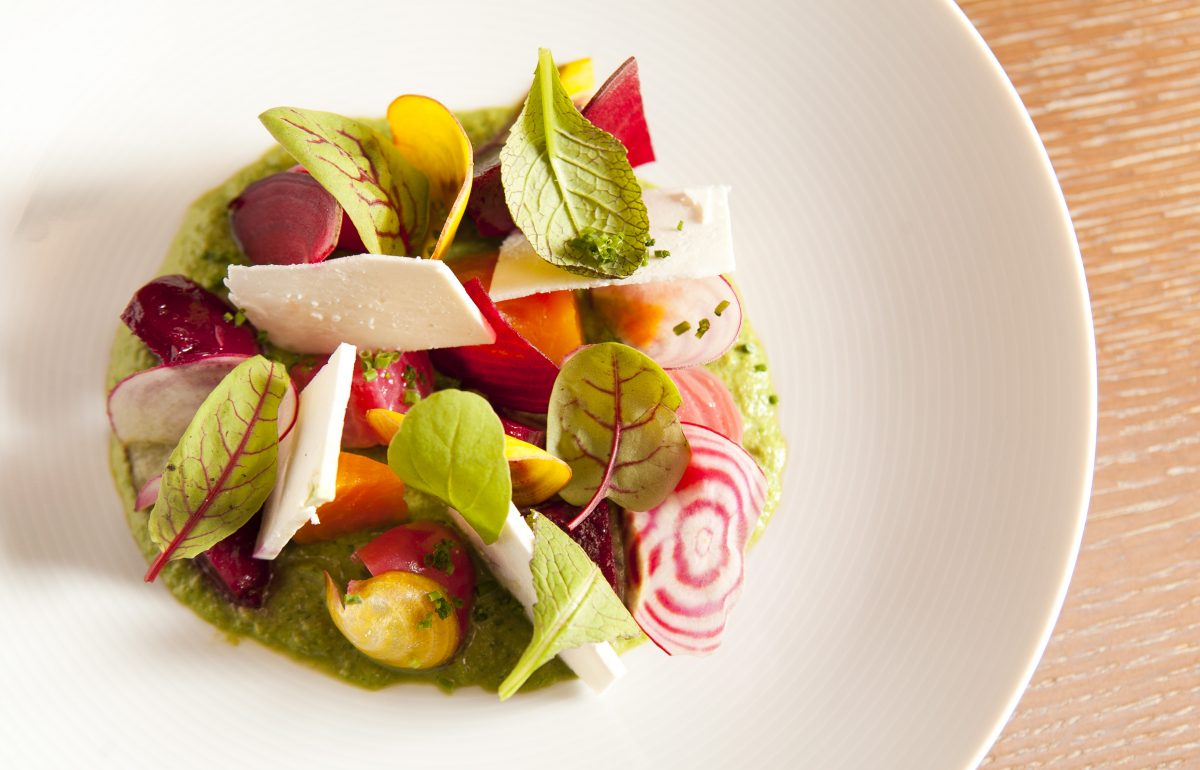 NEW YORK—It’s still a French bistro at the core, but now with a modern American slant. Antique mirrors, walnut, glass—a new bar and a communal table in the front dining room.

The newly crafted menu is a collaboration between executive chef Jim Burke and Boulud. It’s divided into Cuisine Classique, with bistro classics from all over France, such as Coq au Vin and Alsatian Tarte Flambée, while the Cuisine du Marché puts forward seasonal dishes.

“Like me, db bistro moderne has roots in the French countryside and traces of American experiences as a cook and a chef, and some of my favorite French bistro dishes now on the menu reflect that duality,” said Boulud.

One of the dishes on the focused menu that is an example of that collaboration is the celery root appetizer. Boulud wanted to treat the root like a protein. So it is baked in a salt crust, and like you might a steak, it’s served with wild mushrooms, along with apple confit and toasted barley jus.

The Marché menu is lighter, and the homemade pastas reflect Burke’s experience with Italian cuisine.

Burke, who comes most recently from Caffè Storico at the New York Historical Society, is a three-time James Beard Award ‘Best Chef Mid-Atlantic Finalist’ and a Bocuse d’Or USA finalist in 2010. He owned his own restaurant, JAMES, in Philadelphia.

He and his wife Kristina spent two years living in Italy, an experience that was formative. One year was spent in a restaurant in Bergamo, Lombardy, while the second was spent cooking at a private villa in southern Tuscany.

The couple came back with few recipes, but more importantly, a “deeper understanding of food,” Burke said. “To eat seasonally is the only way to eat.”

“It’s popular to be farm-to-table now,” he said, but to Italians, this is second nature. “You only eat asparagus in the spring, fava beans in the summer.”

On the menu’s Cuisine du Marché, you can find an ingredient inspired by his Italian sojourn: fennel pollen. Burke said the pollen is from wild fennel, different from common fennel. Wild fennel, found both in Tuscany and California, adds an aromatic dimension to the risotto with blue prawns.

As to the original db Burger, with red wine-braised short ribs and foie gras, topped with shaved black truffle, it’s still on the menu.