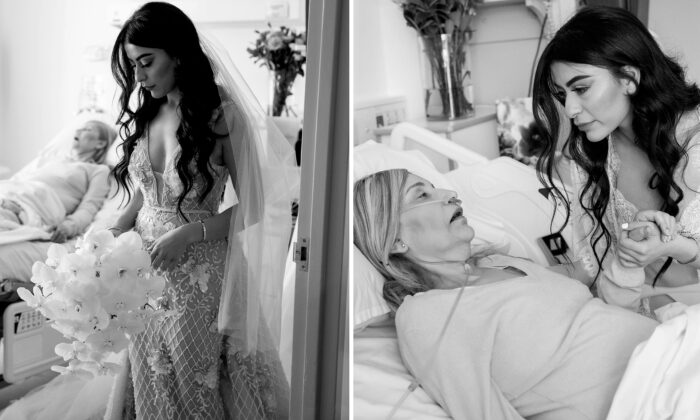 Daughter Holds Wedding Ceremony in Dying Mom’s Hospital: ‘It Was Such a Small Gift to Give Her’

A beautiful bride who wanted her mother to be a part of her wedding day planned to have her vows held at her mother’s hospital chapel. While terminal cancer took away her mother’s life the very next day, she cherishes the precious memories that were made, and her mother’s final “Thank you,” for a lifetime.

Elizabeth Basoski, 27, and her husband, Ivo, 34, live in Sydney, Australia. Both lawyers, they took time off before their wedding to take care of Elizabeth’s mother, 60-year-old Magda, as she battled cancer.

“She had cancer for 16 years,” Elizabeth told The Epoch Times. “She was technically a cancer survivor. She had breast cancer which then metastasized to the lung.”

Magda was admitted to Sydney’s Sacred Heart Hospital where her family kept vigil as her condition worsened. When doctors told Elizabeth that her mother had only a little time left, she was angry and defiant, but knew what needed to be done: she and Ivo would have to bring their wedding day forward so that Magda could attend.

Elizabeth wrote a letter to the hospital stating her case, and plans were finalized within five days. According to Elizabeth, everyone was incredibly supportive of having the wedding day preponed. Her husband, she says, was “1,000 percent supportive” and never second-guessed the plan. Meanwhile, Ivo’s parents, who were traveling from their home in Canberra, also had their back completely and were ready to take on any task.

All the vendors, too, were supportive, including her designer, Steven Khalil, who made her dress. According to Elizabeth, usually, it takes a year to get a dress from him.

“It was amazing,” Elizabeth recalls. “There’s not one person that did not support us.”

“We planned our wedding in such short notice but the complexity and difficulty were also because of the pandemic,” Elizabeth added.

Elizabeth planned to get dressed in her mother’s room, and recalls that her wedding day, Oct. 10, 2020, itself was “perfect in every way.”

“I sat next to her bed. I remember her saying, ‘Thank you, you look beautiful,'” she continued. “It was such a small gift to give her back after what she has given us.”

Elizabeth’s brother and brother-in-law wheeled Magda, in her bed, to the hospital chapel. As her mother entered the church, she summoned the strength to clap and even “knew where she was.”

Elizabeth recalls that, throughout the ceremony, which was held during the day, she felt so nervous and anxious. Some of her photos even captured her looking over her mother as she was worried for her. Even while Elizabeth got out of her dress she was so stressed. “I was like she’s alive like she was on both feet,” Elizabeth said.

Photos by Ariana Photography Studio were shared on Instagram (getting dressed, and the ceremony), depicting touching, intimate moments between the bride, her mother, and her extended family.

Magda, said Elizabeth, teased her for being slow as she dressed, prompting laughter and one joyful photo captures the special moment.

The couple held their wedding reception the following day in the city. Elizabeth’s aunt was at the hospital with Magda as they watched the reception via video.

Recalling the moment, Elizabeth said that, after they made an entrance, she made a small tribute to her mother.

“My aunt was talking to her, and she was like, ‘My baby got married’ and had tears on her face, which was completely bizarre because the doctors said her eyes were drying out.”

After her aunt explained to her mother that Elizabeth got married a day earlier, and told her this is the reception that they were supposed to attend, Magda squeezed her hand. She passed away that night.

Many people have since asked whether Elizabeth regrets her nontraditional wedding, but the bride has never looked back.

Family has been important to Elizabeth and Ivo since the beginning. Both their families were present when Ivo proposed, and both families have supported their choices ever since.

Elizabeth remembers her mom, who was married almost four decades, as a “very strong, very tough” woman with a humble heart. Numerous anecdotes shared at her funeral attest to her always finding the time to help others.

“We were completely inseparable,” Elizabeth told The Epoch Times, “to the point where I was very uncomfortable leaving her while she was unwell.”

“I would tell her a lot of things. She was one person I would turn to and talk to, and get advice from and share things,” Elizabeth added. “I’ve got to live life knowing that I can’t, anymore.”

Elizabeth was, in turn, Magda’s confidante as her cancer worsened. Yet amid heartbreak, the loving mom had words of advice for her newlywed daughter.

“You always took care of me, you’re so compassionate … you’ll have a successful marriage the whole way through,” she said. “You’re very confident; just continue being like that, don’t lose yourself in your marriage. Be yourself, because he fell in love with that person.”

Finally, she advised her daughter, “You stress too much! Put yourself first sometimes, it’s okay.”

Since Elizabeth’s wedding pictures were shared on social media, others have reached out to her to share their own tales of love and loss. Elizabeth, who knows the depth of their pain, has responded to every single one.