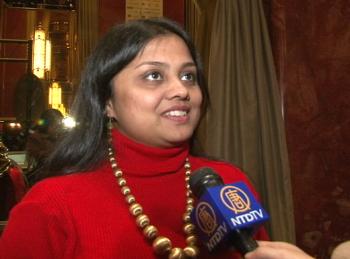 “They are excellent,” she said.

Ms. Chaudhuri is a member of the prestigious International Dance Council–UNESCO and is currently the Director of the Arts and Culture Institute of International Social Development. What struck her most about the show was “its spiritual nature” and the way “they are presenting Chinese culture and the ancient Chinese culture.”

“Not the modern one,” she noted, adding that "the ancient Chinese culture that they are portraying is fantastic,” said Ms. Chaudhuri who has been dancing for the last quarter-century.

Shen Yun features classical Chinese dance, song, and an orchestra. The various dances throughout the show portray 5,000 years of traditional Chinese culture, including the myths, legends, and history of one of the oldest civilizations on Earth.

“I loved the warrior who killed the tiger,” said Ms. Chaudhuri, referring to the dance Wu Song Battles the Tiger. “He was really good,” she said.

According to the program, the story originates from one of China’s most beloved novels, Outlaws of the Marsh, in which a man-eating tiger plagues a small village bordering a forest. All those who attempt to take on the tiger fail. But when a village man is killed, the mighty Wu Song decides to stalk the beast himself. He has, however, a most unusual method for battling the tiger.

Ms. Chaudhuri also really enjoyed the female dancers. “Oh, they are beautiful. Exquisitely beautiful-their make-up, their dress, … They are very graceful. It is a beautiful experience.

"I would love to be part of such a show in the future. It’s really beautiful,” Ms. Chaudhuri said.

With reporting by Lan Qing.