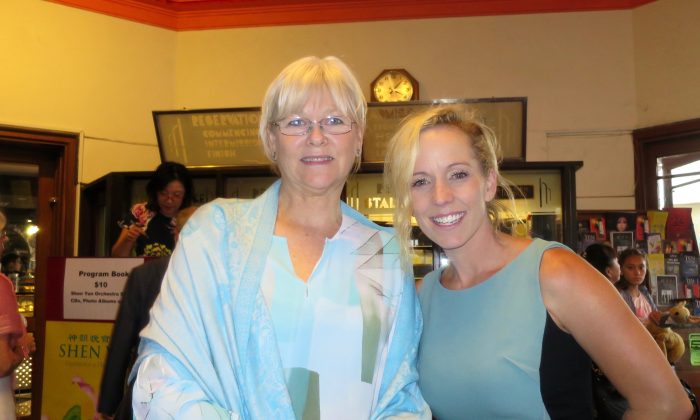 PERTH, Australia—With barely a spare seat to be found, the clouds above Perth grew ominous and a downpour of rain threatened the audience of Shen Yun Performing Arts World Company when it opened to enthusiastic applause at the Regal Theatre on Jan. 30. But nothing could stop the beauty of Shen Yun shining through and touching the hearts of those in attendance.

Kristal Twight, a dance school owner with a professional dancing career spanning 12 years was in awe.

“Technically beautiful! The technique of the dancers—unbelievable. The musicality—unbelievable. Everything about it—sensational!” she said. “Emotionally I had an amazing two-hour experience.”

Ms. Twight was an enthusiastic classical ballet student before excelling in gymnastics and training with the Institute of Sports, and then refocusing on classical ballet and studying a Specialist Dance Program at John Curtin College of the Arts. She has a high level of proficiency in key dance disciplines including gymnastics/acrobatics, contemporary, classical ballet, jazz, and lyrical. With a background in choreography as well, Ms. Twight has danced and choreographed for opening ceremonies, AFL and NBL games as well as the WA Youth Awards, the 2013 Chevron Ball, the Saba Rose Button Charity Ball, and the World Aerobics and Basketball Championships. She also did three years of classical Chinese dance.

Ms. Twight was interested to learn that most of the dance, gymnastics, and acrobatic forms that are around today originated from classical Chinese dance.

“The male dancers had incredible energy and amazing tenacity. It was brilliant! I loved it!” she said. “The technique with their classical dancers, the males have got a beautiful length and strength in their bodies, and the females were gorgeous.”

“The musicians are incredible, and the connection with the music and the dance is flawless.”

Based in New York, Shen Yun has classical Chinese dance at its heart, but also incorporates folk and ethnic dance as well as mini-dramas, giving glimpses of China’s five millennia of culture and history. State-of-the-art digitally animated backdrops brings these mini-dramas to life.

The Shen Yun website states, “The backdrops are magical windows to completely different realms. From vast open grasslands in one dance to the stately elegance of Tang Dynasty pavilions in another; from dusty yellow battlegrounds to tropical beaches to Himalayan peaks to picturesque scenery of the Yellow River Delta—the digital projection infinitely expands and transforms the stage.”

Ms. Twight was delighted with the mini-dramas and their insight into China’s heritage, as well as how the backdrops added an extra dimension to the performance.

“It was a brilliant show! A fantastic show! It’s vibrant, the colours in the costumes are outstanding,” she said.

“I loved the diversity in each item … I love the visual, so with what was going on with the back of the screen and what was happening on the stage, the combination of the two mixed together was incredible.”

She also loved the journey.

“I found it emotional … Brilliant and really surprising, so you never knew what was going to happen. It was always like an adventure. I loved the history, it was really beautiful to see the history of China,” she said.

Shen Yun’s mission is to revive the millennia-old culture of belief in the divine and moral virtues, such as benevolence and justice, propriety and wisdom, respect for the heavens, and divine retribution which was almost destroyed under communism.

“Forcing atheism upon society, the Chinese Communist Party has for decades launched various campaigns—most notably the Cultural Revolution—to destroy not only cultural sites, temples, and relics, but also the Chinese people’s belief in virtue and faith in the divine,” the website states.