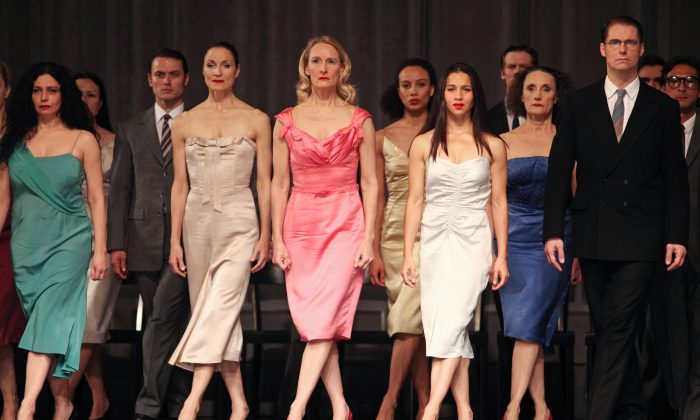 The Tanztheater Wuppertal Pina Bausch dancers gave a masterful performance of their founder’s 1978 work, “Kontakthof,” at the Brooklyn Academy of Music.
Arts & Culture

NEW YORK—The devil is in the details, especially when it involves courtship on the dance floor. Its preparation and results were brilliantly explored in Pina Bausch’s 1978 piece Kontakthof (which translates to “contact zone”).

Tanztheater Wuppertal Pina Bausch gave a masterful performance of their founder’s work recently at the Brooklyn Academy of Music.

Taking place in what looked like a high school gymnasium, with people sitting in chairs pushed against the walls, the awkwardness level was sky high. The story shifted back and forward in time, with movement and dance imparting the tale.

The participants checked their hair, examined their posture, the lines of their clothes, and the cleanliness of teeth to make sure their appearance was perfect. Though one couldn’t help but think that the show of the teeth was also a sort of phony smile as each person got ready for what was to come. Each person’s movements mirrored both the person before and the one who immediately followed.

These early preparations were only one of the many things to be repeated again and again during the course of the performance.

One of the work’s biggest strengths was its universal familiarity, allowing the audience to easily relate to the story and those involved. This was especially true in regard to comments hurled by the participants.

Two women sniped at another female (“she looks like a horse”). Two ladies picked on a hapless fellow who just wanted to dance (“I can smell him following me”). A woman started laughing hysterically, another started crying, and one kept trying to attract the attention of her companion (who knew there could be so many different emotional connotations to the word “darling”?).

All the while, the rest of the dancers did their best to ignore these disruptions and continue with whatever else they were doing. When a dancer, unable to stay in step with the rest of the line, ended up having a total meltdown, he accused everyone else of doing the steps incorrectly.

These all too human reactions and situations made the entire experience feel quite real. Another particular highlight occurred when the entire company sat down and started talking in different languages, with snippets of each conversation (most of which were hilarious) heard one at a time.

One also couldn’t help but wonder how old these folks were supposed to be, as there was an ongoing sequence where one guy chased after a girl while holding a mouse.

Not surprisingly, there was a sexual undertone present in everything that happened. There was also the ever-present danger of sexual flirtation getting out of control with coupling and willingness turning to violence and abuse, especially when a group mentality took hold. All of these elements were presented for the audience to analyze and dissect.

Then there was the dancing itself, which could be described in many cases as almost matter-of-fact and not at all in a bad way. The movements of the dancers were often in perfect unison while complimenting the different situations occurring around them, rather than competing with or taking away from any other portion of the story.

One also saw the repetitiveness in the movements; one dancer repeating what another just did moments ago. This practice illustrated the idea of courtship being an eternal cycle, one of wooing, winning, capturing, controlling, separating, and coming together again for another try.

For the most part, the various pieces and the music used were all elegant and refined. A notable exception was when the tempo suddenly changed, and the dancers appeared to be thrown about in a hurricane. The women seated in chairs were pulled closer and closer to the men, who were frantically flailing their arms in the air.

This sequence was repeated later on, only this time it was the men in the chairs. The previous air of elegance morphed into one of desperation, animal desire, longing, and need.

Through it all, the performers jabbed and slapped at one another as they tried to teach their partner of the moment how to dance, while also seeing just how much they could get away with. Their interactions might be a precursor for what may happen later on.

Indeed, there were times different couples paired off, walked away hand in hand, and then individually came back for more.

The overall presentation of the piece was excellent, the story seemingly ebbing and flowing from one situation to the next, but always as a part of a greater whole.

The costume design by Rolf Borzik was very good. The men appeared mostly in sharp gray suits, the women changed into various outfits, often on stage, as did the men at times.

Kontakthof was long, clocking in at just under three hours. But then so is the practice of courtship, as opposed to that of simple mating—especially when one is forced into unfamiliar or uncontrollable situations along the way.

Breathtaking to watch and flawless in its execution, the piece was quite simply brilliant from start to finish.