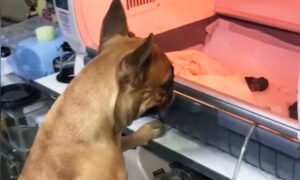 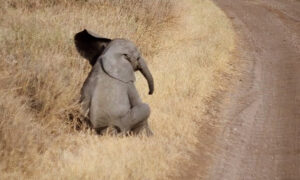 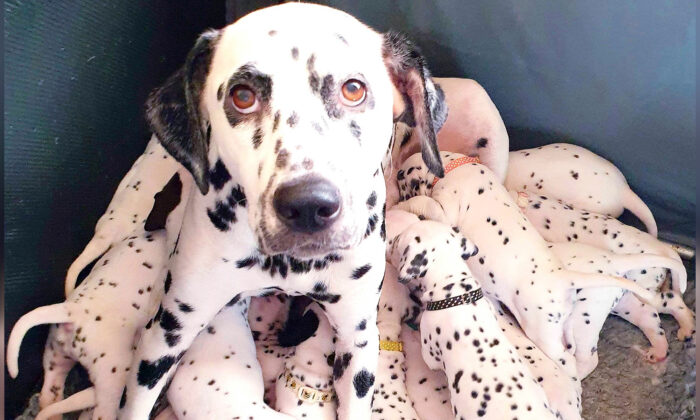 A dalmatian mother has made international headlines after giving birth to a litter of 18 puppies, twice the size of the average litter for a first-time mother dog.

Three-year-old Nellie endured an exhausting 14-hour labor in April 2020. Kennel Club breeder Louise Clement, from Preston in Lancashire, England, was stunned as she helped welcome 10 male and eight female puppies into the world. All together, they are a sight to behold.

“She had a great natural labor but they just kept on coming,” said Clement, reports the Independent. “I thought she’d stopped after number 15, because it looked like she had laid down to go to sleep, but then along came another one, and two more after that.”

“I was there for each one when they were born and helped her with each of them,” Clement, a former nurse, recalled. “We weighed them and put a colored collar on them to tell them apart.”

Adding that she is immensely proud of her pedigree pooch, Clement described Nellie as “a really lovely mom.”

Clement, 46, has kept dalmatian dogs for three decades; at the time of writing, the dog breeder has a grand total of 27 dogs living at her home. “Fortunately, we have a lot of outside space and the dogs have lots of things to play with,” she said.

The dogs have a jungle gym in the yard and free rein of the house. “A couple occasionally join me in bed,” Clement added.

The breeder plans to keep one of Nellie’s puppies to add to her pack, but the 17 remaining pups will be sold to new owners when they are old enough to leave their mother.

Dalmatians, historically known as “coach dogs,” were originally bred to accompany the horse-drawn rigs of noblemen, traveling communities, and firefighters, says the American Kennel Club. They are loyal and loving, make dependable guard dogs, and have one of the most iconic, distinctive fur coats in the world of canines.

According to Metro, while dalmatian Nellie’s gargantuan effort stands out in the United Kingdom in a big way, a dog named Melody, from Albury, Australia, bested Nellie’s number by giving birth to a whopping 19 puppies in one litter in 2019, while also breaking a world record for the breed in the process.

Melody’s breeder, Melissa O’Brien, told The Canberra Times that the mom gained 15 kilograms (approx. 33 pounds) during her pregnancy. The pups were delivered on June 13, 2019, by cesarean section with the help of eight medics. O’Brien likened the delivery to a “never-ending supply” of puppies.

“Records aside, it is pretty incredible all of them are alive,” said O’Brien, adding, “We had to supplement and bottle feed a few for a while to help mom out.”

O’Brien claimed that as a breeder, she normally sees big litters, as they run in bloodlines, but Melody’s litter was easily the biggest she had ever seen. The breeder and her family named all the puppies after Disney movie characters as a way to keep track of them.

“Their temperaments are bomb-proof,” O’Brien praised. “They have to deal with my two-year-old so they are very used to small children and human interaction.” Like Clement, O’Brien planned to keep one puppy and sell the rest of the litter.