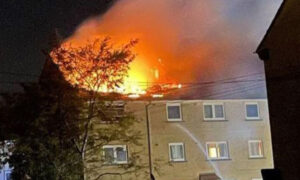 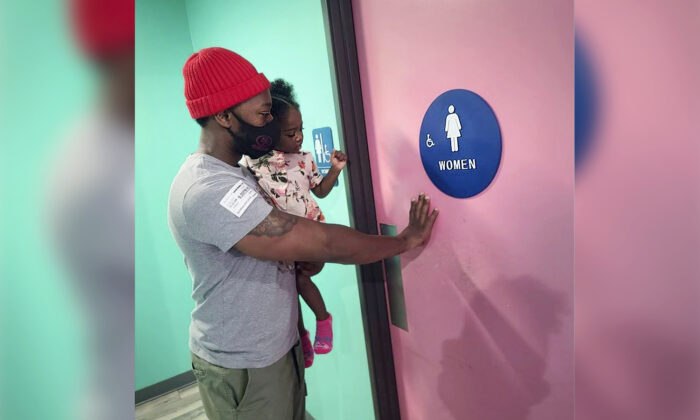 Faced with the conundrum of whether to head for the men’s or the women’s when taking his young daughters to the bathroom in public, Muhammed Nitoto posted on social media exactly what was going through his mind.

In the absence of family or unisex bathrooms, Nitoto, of San Pedro, California, overrode the norm and headed for the ladies’. His explanation went viral.

“Now when first hit with this choice I did what most men would do, which is, I went to the men’s bathroom,” Nitoto captioned on his Instagram, Chronicles of Daddy, on Nov. 24.

But walking in with his daughter lent a whole new perspective to the experience. “Men’s bathrooms are DISGUSTING,” he exclaimed. “They smell like pee and nothing is set up for a woman or a person with a child.

“The changing table was right next to the urinal, which means my child literally would be next to where men pee [when] she’s being changed.”

Once was enough for Nitoto. He vowed henceforth to always use the ladies’ when taking his daughters, Zendaya and Zuri Lily, to freshen up. But not without arming himself with a respectful protocol first.

Knocking is a must for a gentleman and his little girl. And a verbal announcement that a dad and daughter duo are about to trespass is the polite thing to do.

“Now once inside our stall I still am aware of the door,” he adds, “and whenever I hear it open and someone new is coming in, I announce myself again.”

As a “girl dad,” protecting his daughters from all that’s not good is his duty. “[T]he men’s bathroom is 100 percent one of those things,” he signed off, adding, “Am I the only one? Ladies how does this make you feel?”

The diligent dad’s viral parenting message has even put him in the media spotlight. He told Good Morning America that he posted on social media to help other parents but also to “spark the conversation for active fathers in the world.”

“It’s almost like the parenting story isn’t shared in-depth from a father’s side,” Nitoto reflected. “That’s why I started my Daddy Chronicles. I wanted to tell the dad’s side of stories … some that haven’t even been talked about before.”

Nitoto claimed that women with children have been his most vocal supporters so far.

This isn’t the first time the father of two has gone viral on social media. On Sept. 5, he shared a post in support of a breastfeeding partner, along with five tips for doubtful dads.

At the heart of Nitoto’s parenting philosophy is his love for his daughters. Speaking to Bored Panda after his Sept. 5 post went viral, Nitoto claimed that becoming a dad has been the single most life-changing experience of his life.

“It’s like the greatest glass of water on a nice hot day,” he summarized. “Being Dad refreshes my soul.”