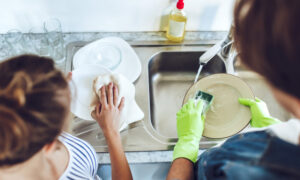 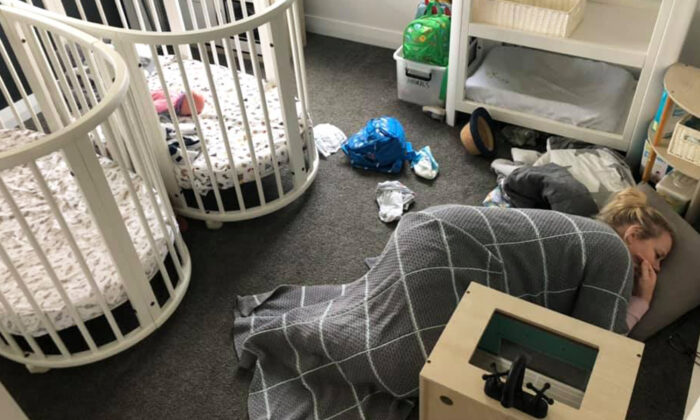 A New Zealand mom of 3 was busy changing her toddler’s nappy before she went eerily quiet. Curious about the unusual silence, her husband went around the house looking for her. When he came across his exhausted wife taking a well-deserved nap, he couldn’t help but pay tribute to his wife and all the “mums out there who are just spent.”

Peter Bristow, a personal trainer and online fitness coach, from Kumeu in New Zealand, was feeding the kids downstairs one day in April 2019 when he realized that his wife wasn’t around. “Where the heck is mum I thought. She must be tidying the boys room,” he wrote on his now-viral Facebook post.

After several more moments passed without any noise, or without her emerging from the bedroom, Bristow decided to go and look for his wife, Sarah.

As he walked towards the toddlers’ bedroom, he saw something that intensified his heartbeat. “All I could see was a pair of feet in the doorway,” he wrote.

For a brief moment, Bristow was concerned whether his beloved spouse was “even alive.” But as he approached her, he drew a breath of relief when he realized what was actually happening—Sarah was taking a nap right there on the floor in the toddlers’ bedroom.

Like a truly loving husband, the man wrapped his exhausted wife in a blanket and gave her a pillow before letting her enjoy a little snooze. “She emerged 20 odd minutes later, after a little nana nap,” he added.

Bristow’s wife was like the millions of parents around the world who continue to keep going on with their chores and rarely find time to stop for a little breather. As it turned out, Sarah told him that after changing the toddler’s nappy, she had been so worn out that the floor seemed like a “luxurious bed of feathers” to her tired eyes.

Seeing his wife take a nap in between all the chores, Bristow had a loving appreciation toward her and all the mothers who constantly keep juggling between the countless tasks on their long to-do list.

“Bless you hun,” the grateful husband wrote. “You give life 💯 it was nice to see you ‘just stop.’”

One social media user wrote: “This just brought back memories of me falling asleep on the floor in the twins’ room… many many times.”

While another who was in praise of all hardworking mothers wrote: “Not all hero’s wear capes! Some are Mums with a blanket thrown over them on the bedroom floor!”

Meanwhile, some social media users took to appreciating Bristow for being a supportive husband.

A particularly humorous comment read: “Good on you for letting her nap as she desperately needed, funny how men always check where mum is in the house, but when they pop out to the garage for a few hours, no one assumes they are dead!”

Regardless, Bristow’s thought-provoking post serves as a reminder that sometimes mothers “just need to stop.”