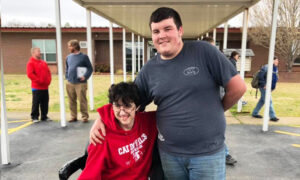 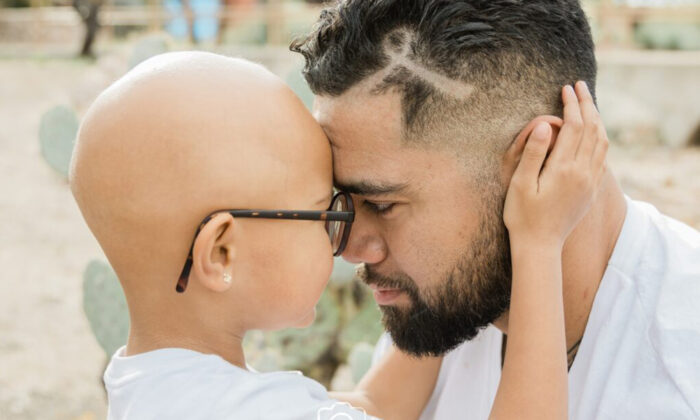 A dad from Tucson, Arizona, showed the depth of his love for his daughter with a heartwarming gesture on his birthday. He booked a father-daughter photo shoot that went viral for one very special reason.

The adoring dad asked his little girl, who has alopecia, to shave his head bald in solidarity.

Dale Haretuku and his partner Xina Eidson’s daughter, Luna, was born on April 24, 2015. She was completely bald by the age of 2. “We kept on trying to hold as much hair as possible until it was just fully gone,” Dale told KOLD News 13.

They experimented with various haircuts but decided to shave Luna’s head when her hair was all but completely gone, and focus on helping her continue to develop as a healthy, happy child. Luna even has a “Brave Barbie” doll that sports a beautiful bald head, just like her.

In February 2020, knowing that his daughter was now old enough to appreciate the significance of the gesture, devoted dad Dale made another big decision. Ahead of his birthday, Dale decided that the time had come to hand the clippers to his growing daughter, but this time it wasn’t her hair that was going to be cut.

“I just figured on my birthday this year I was going to do it,” Dale told KOLD News 13.

Before sitting down to have his head entirely shaved by his 4-year-old daughter, Dale showed off his previous haircut one last time—a short back and sides with an alopecia ribbon shaved into the left side, near his temple.

Wishing to go one step further, however, Dale handed Luna the clippers and prepared to join his daughter in brave, beautiful baldness.

Dale shared the photos and a touching video on Facebook on Feb. 24, 2020. The family received a plethora of loving supportive comments from friends, family, and alopecia advocates around the world.

“Having a support system is key when going through any adversity,” Dale wrote in the video description. “We’d like to share our support and story in the hopes to have many of you share yours as well in this safe space of Positive Parenting Life.”

After launching Positive Parenting on social media, Luna’s parents managed to reach tens of thousands of families affected by the same autoimmune condition. Luna’s parents even connected with a family with kids in the Tucson area and hope it will turn into play dates for their 4-year-old girl.

“People try to cover [alopecia] up a lot, it’s not very public,” Luna’s mother said in a report by KOLD News 13. “We’re just trying to educate basically we want everyone to know about it.”

Eidson said that hair is not what constitutes a person’s value. Hats, wigs, and headbands are all options, said the supportive mom—so is proudly going bald.

As per the National Alopecia Areata Foundation, the common autoimmune condition causes hair loss on the scalp, face, and sometimes the body. It affects around 6.8 million people in the United States alone.

It all started with a heartwarming birthday haircut. Now, Dale hopes that by sharing his and Luna’s story, the family can continue to increase awareness of alopecia and help support others affected by the condition.

“Let’s continue to come together to spread awareness and resources for all of life’s adversities,” Dale shared on Facebook. “We’re here for you. Come and join us.”