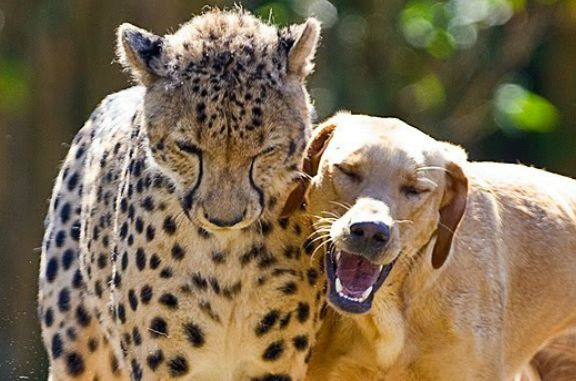 Kasi (L) and Mtani (R) have been buddies since they were a cub and puppy. See video of this cheetah-canine duo below. (Screenshot/YouTube)
Animal videos

If a cat and an owl can become friends, there’s hope for world peace.

Here’s a look at the surprising ways in which connections have been forged across boundaries of species and natural instinct.

Ben the Lab and Duggie the Dolphin

Ben, a Labrador retriever, and Duggie, a dolphin who frequents the shore off the coast of Tory Island in Ireland, became fast friends a few years ago. Ben and Duggie have amazed locals and the global community—videos of the two have gone viral online—as they swim and play together. Ben swims for hours with the dolphin, sometimes to the point of exhaustion. When Ben gets too tired, however, Duggie gives him a lift.

Kasi the Cheetah and Mtani the Dog

In April 2011 in Busch Gardens Tampa, a cheetah cub and a puppy forged a friendship that would last years. Kasi the cheetah and Mtani the dog remain good friends years later.

Brian Ladoon of the Canadian Eskimo Dog Foundation was amazed to watch polar bears and his dogs naturally gravitate toward each other in Churchill, Manitoba, Canada. Every fall, the bears and dogs joyfully unite until the bears leave on their annual migration route once the ice freezes.

A Compilation of Other Unlikely Pairs

*Image of cow and dog via Shutterstock
*Image of bunny and duckling via Shutterstock
<br data-mce-bogus=”1″>[<a href=”http://storify.com/TaraMacIsaac/unlikely-animal-friends” target=”_blank”>View the story “Unlikely Animal Friends” on Storify</a>]