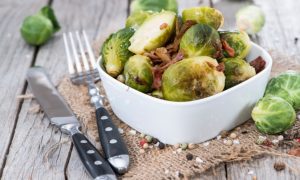 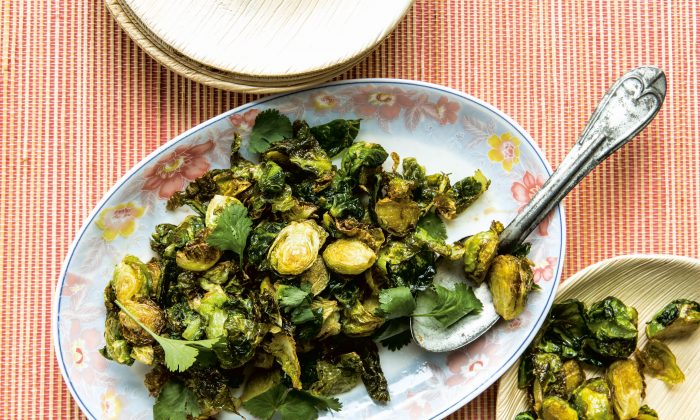 One of the most common appetizers that you see on the menus at Vietnamese restaurants in Houston is chicken wings with caramelized fish sauce. These sweet-salty, crispy wings were one of the first dishes that got me loving the flavors of Vietnamese cooking. As I became more experienced cooking with fish sauce, I took the idea of caramelized fish sauce chicken wings and applied it to the abundance of seasonal vegetables that we’re constantly getting from our local farmers. I’ll always have a soft spot for those wings, but I think I might love this recipe even more. And it speaks to the flexibility of fish sauce as an ingredient that it works as well with certain vegetables as it does with meat.

This is a recipe that you can (and should) experiment with—the only “rule” is to use a dense vegetable cut into bite-size pieces. I make versions with broccoli, cauliflower, green beans, okra, Brussels sprouts, and even shishito peppers.

This recipe calls for deep-frying the vegetables, and I recommend you do it that way at least once. Deep-frying gets the vegetables to a level of crispness that allows the fish sauce caramel to cling to the exterior without making it soggy. But I get that not every night is a “set up the deep fryer” night. So on those nights, roast the vegetables, well oiled, in one layer in a really hot oven until they show some nice browning for a similar, though not quite as texturally amazing, effect.

Make the sauce: In a medium saucepan, combine the fish sauce, vinegar, brown sugar, garlic, cilantro, and 2 tablespoons water and bring to a light simmer over medium heat. Cook for 3 minutes, then strain through a fine-mesh sieve. Discard the solids. Measure 1/4 cup of the sauce to use in this recipe; if there is any left, it can be stored in the fridge for up to 2 weeks.

Prepare the vegetables: Pour 3 inches of oil into a large pot or Dutch oven that will still give you a couple inches of clearance. Heat over medium-high heat until the oil reaches 350 degrees F on a deep-fry thermometer. While the oil is coming to temperature, heat a large skillet over high heat until it is very hot. When you’re almost ready to fry the Brussels sprouts, pour the reserved 1/4 cup fish sauce mixture into the skillet. It should sizzle and come to an almost instant boil. Cook until the sauce reduces to a glaze, which will happen very quickly, less than 1 minute. Take it off the heat but keep warm.

Meanwhile, working in batches, carefully add the sprouts to the oil and fry until nicely crispy, 30 seconds to a minute. Remove and drain the sprouts briefly on a paper towel-lined plate, then quickly add them to the skillet with the sauce. When all the sprouts have been fried and added to the sauce, squeeze in the juice from the lime half and add the chopped cilantro. Toss to coat the sprouts in the sauce. Garnish with the cilantro leaves and serve immediately.

Recipe reprinted with permission from “Cook Like a Local: Flavors That Can Change How You Cook and See the World,” by Chris Shepherd and Kaitlyn Goalen. Published by Clarkson Potter.

Texas Governor Says No to Another Lockdown, Calls It ‘Wrong Course’
0