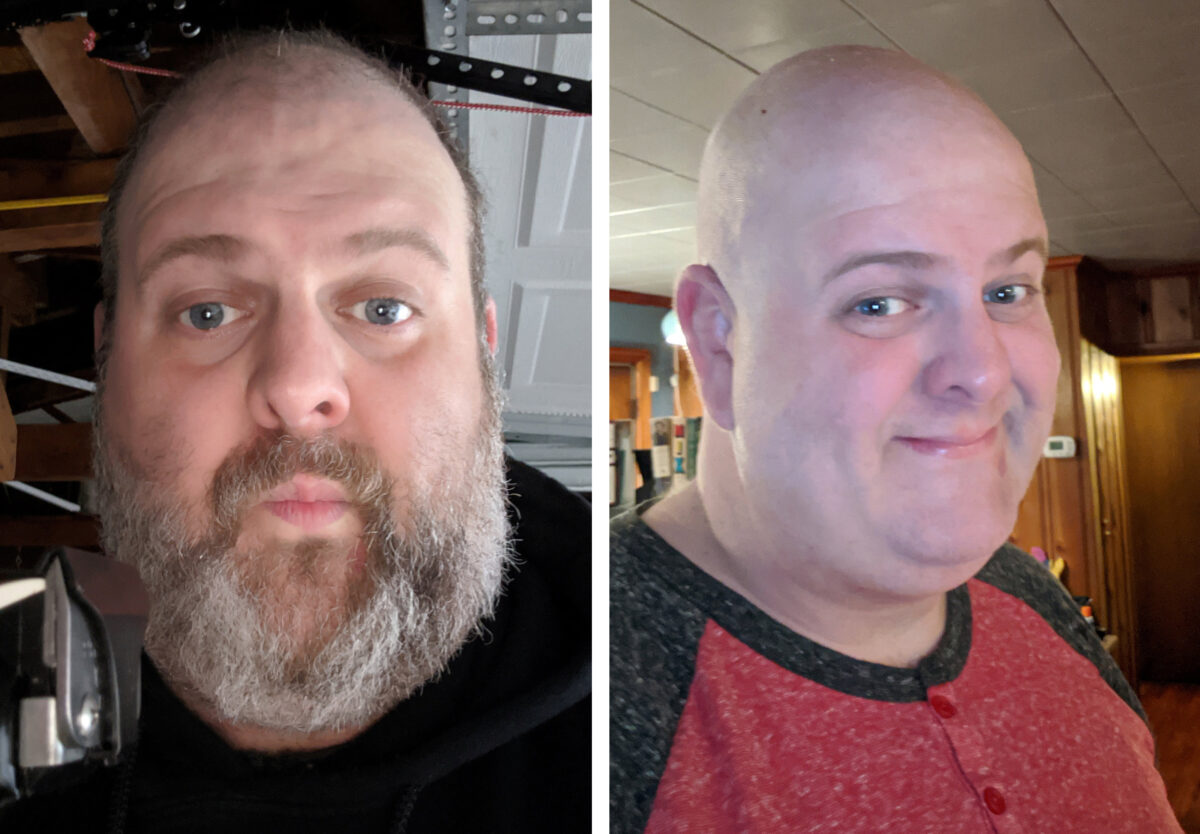 Selfies of Ed Maudlin taken before and after he shaved his beard during a lockdown to prevent the spread of the virus in Indianapolis, on March 24, 2020. (Ed Maudlin/Handout via REUTERS)
Family & Education

NEW YORK—Jacob Kunthara’s wife and three adult children had never seen him without the mustache he sported for 45 years. During coronavirus lockdown this week at home in Gilbert, Arizona, he shaved and covered up with a face mask, which he whipped off at dinner to shock his entire family.

Across the U.S., “stay at home” orders with no end in sight have been seen by many as a once-in-a-lifetime chance to experiment with a dramatically different look, knowing that if the new image is a flop, they have several weeks behind closed doors to grow back or restyle the hair on their faces or heads.

“This is the most radical thing I’ve done ever,” said Kunthara, 62, a civil engineer whose home is about 25 miles southeast of Phoenix.

“I thought, ‘Maybe this is the best time to try something. I’m home, we cannot go anywhere,'” Kunthara said.

Riebling said she had to improvise her haircut after watching a YouTube tutorial and realizing she had none of the proper tools.

“I scrounged around my apartment and did it ‘Little Mermaid’ style with thingamabobs,” said Riebeling, 23, a preschool teacher, referring to the Disney movie in which a mermaid combs her hair using a fork she finds in a sunken ship.

“Being in quarantine takes off a lot of the pressure that you normally might feel going out in public and worrying about your appearance,” said Riebeling, who snipped away during a video conference call with two girlfriends also stuck in their homes, including an investment banker in New York and an occupational therapy student in Chicago.

“We’re limited right now in our movement and what we can do. That’s scary for a lot of people. To find places where you can feel empowered and make decisions about yourself, your body, how you choose to be in the world is a great way of reminding yourself that you are in control of as much as you can be,” Riebeling said.

When an Indianapolis call center deployed staff to work at home last week, employee Ed Maudlin scratched his years-old bushy beard and thought, “I wonder what I look like under there?”

Knowing only his girlfriend and whoever he chose to share his photos with online would see him before his office reopens in “at least a month,” Maudlin this week shaved his beard and his head.

“I decided to go with the full all-over—nobody will know,” said Maudlin, 45, who said he expects facial and head hair will grow back by the time he’s returned to a shared office.

“I figure I will come out of this looking like maybe I need a bit of a haircut rather than looking like Tom Hanks on the island,” said Maudlin referring to the role that Hanks, who this month became one of the first celebrities to test positive for COVID-19, played in the 2000 film “Cast Away.”