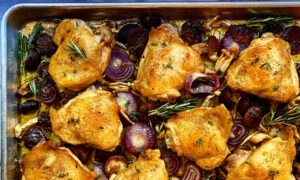 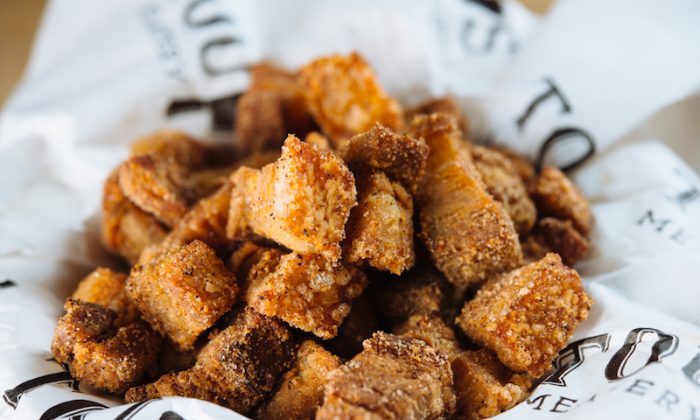 Cracklins, also called grattons, are deep-fried chunks of pork belly and skin. But they’re so much more than that. If I could only eat one Cajun food for the rest of my life, it would be cracklins. They are the most unique dish that comes from Cajun culture, and they make me insanely happy. At a boucherie, cracklins are often the first things ready to eat. Once you holler “grattons!” everyone comes running.

Sit back, relax, and read this recipe all the way through, because cracklins rely strictly on technique. This is one of the trickiest recipes in this book. My boudin, which has about 20 ingredients and just as many steps, is easier to master. But don’t worry if your cracklins don’t come out perfect. Even a bad cracklin is still pretty damn good. And don’t get too sure of yourself if your first batch does come out right. Perfection boils down to one minute in either direction.

Note: If you can’t get skin-on pork belly, you can’t make this. But if you only have the skin, without much meat or fat attached, that’s fine. I use the leftover lard I have from previous batches of doing cracklins, but you can use store-bought.

Cut the pork belly into chunks, each with a square of skin about 1 1/4 inches wide. The height of the cracklin doesn’t matter. Some might be nothing but skin, and others might have 2 inches of meat attached. Throw in odd ends, even the nipples—those end pieces become ultra seasoned, like the crumbs at the bottom of a chips bag, and can be the best part.

Start with a cold 13-quart Dutch oven (at a boucherie, this would typically be done in a large cauldron). It should be large enough to hold the pork belly chunks and cover them in rendered lard by at least an inch.

Add the cold lard and cold skin-on belly to the cold pot. Turn the heat to medium-high. As the lard starts to melt, give the pork belly a gentle toss with a wooden spoon, and make sure the pieces of pork belly are separated—they’re naturally going to want to stick together. As the lard melts and the fat renders, the oil in the pot should be 240°F. That’s the ideal temperature for rendering the cracklins.

As the belly renders down, it’s going to create more lard. Stir very gently; if you cause too much commotion the skin will separate from the meat and fat. It’s not like a roux where you stir with reckless abandon. This is the hardest thing to learn: the technique of the first render. Just give the pieces of pork belly an occasional nudge so they don’t stick to the bottom of the pan. If you see bits of skin exposed, turn them back upside down to submerge them in the oil.

Pull the rendered cracklins off the heat when the skin starts to blister and the outsides are uniformly golden brown (this can take 45 minutes to an hour). Take the whole Dutch oven off the heat and let the rendered cracklins sit in the oil and rest until they have completely calmed down, meaning that the oil is no longer bubbling or popping, about 10 minutes. Remove the cracklins with a slotted or spider spoon, and put them in a metal colander or on a wire rack set in a sheet pan so they can drain. (Don’t place them on paper towels—they’ll stick.) You don’t need them to be completely free of fat, you just don’t want them sitting in a pool of lard.

Let the cracklins cool for about 20 minutes in the fridge. Then take your second cold Dutch oven (again, at a boucherie, this would typically be done in a large cauldron) and add enough peanut oil to cover the cracklins in oil by at least an inch with enough room for you to stir them without sloshing oil over the sides.

Set the Dutch oven over high heat and preheat the oil to 380 degrees F. Deep-fry the cracklins for about a minute, until the skin has puffed. Remove from the oil and drain (again, don’t use paper towels). While they’re still hot, season liberally with Crack Spice.

This is my version of a Cajun all-purpose seasoning. You have to use popcorn salt, because even iodized table salt won’t stick to fried foods the way popcorn salt will. Use it on my cracklins, on popcorn, and anytime a recipe calls for Cajun or Creole seasoning. The addition of the sugar allows you to add a lot of ground chile without adding heat—sugar cancels out capsaicin. Store in an airtight container.

Combine all the ingredients in a large bowl. Stir gently with a whisk to combine. And cover your mouth and nose while you do this. Trust me.

Reprinted with permission from “Chasing the Gator: Isaac Toups and the New Cajun Cooking” by Isaac Toups and Jennifer V. Cole. Copyright 2018. Published by Little, Brown and Co.